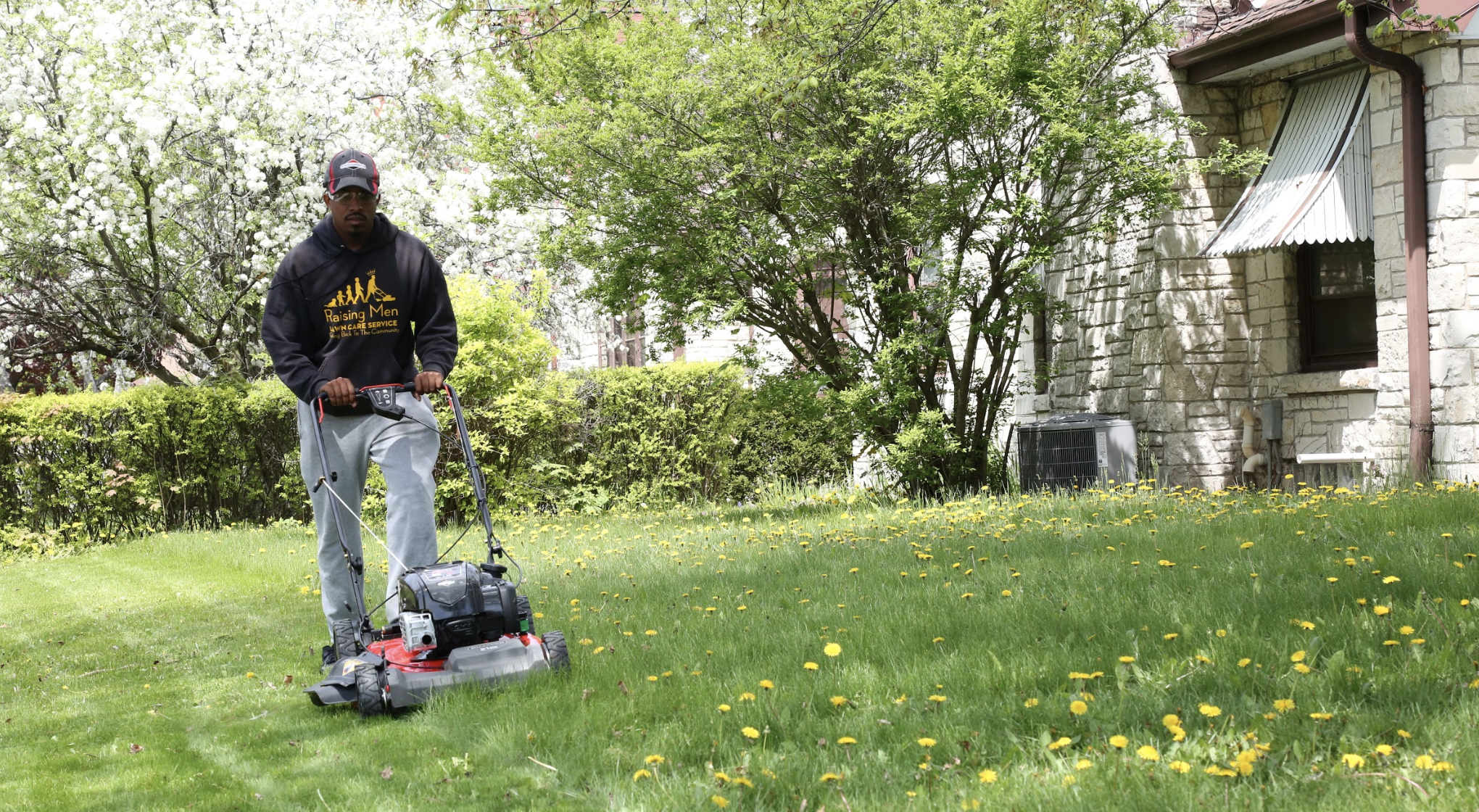 Rodney Smith is on a mission to mow lawns in all 50 states, but his goal isn't just about lawn care -- it's about letting people know he cares.

In 2016, Smith founded a lawn care nonprofit, Raising Men Lawn Care Service, in his hometown of Huntsville, Alabama. Raising Men Lawn Care Service helps young people give back to their communities. The kids in the program visit veterans, the disabled, the elderly, single moms and anyone who needs help doing yard work. They mow people's lawns, shovel show, rake leaves and more -- free of charge.

"In 2016, I saw a man mowing his lawn, struggling. So I got out of my car and helped him," Smith tells CBS News. That moment inspired him to create the movement. He says at the time he was completing his bachelor's degree in computer science. He began mowing lawns for those in need whenever he had free time. "I cut lawns in between classes," he recalled.

Then he decided to start incorporating kids into the mission. He says about 60 kids in Huntsville have joined up, and that was just the beginning.

"It started in January [2016]... By April, we went viral, and ever since, it's continuing to grow," Smith says. He says he decided to expand the movement across the country when a woman from Ohio reached out to him. "She showed her grandson what we were doing in Huntsville and he wanted to join," Smith says.

Smith says now 137 kids across in the U.S. have joined Raising Men Lawn Care Service, as well as one in Canada and seven in Bermuda and the U.K. to help out in their own communities.

"It took off pretty well, but the '50 Yard Challenge,' really made it big," he says.

The 50 Yard Challenge is an idea Smith came up with to spread the word and the mission of his organization. He challenged kids to mow 50 lawns for people in need. The kids join by posting a photo of themselves on social media with a sign that says they accept the 50 Yard Challenge -- and then they get to work.

Smith wanted to complete the 50 Yard Challenge himself, but he raised the stakes. He challenged himself to the "50 Yards in 50 States Challenge."

Last summer Smith visited all 50 states in 39 days, driving to 48 and flying only to Hawaii and Alaska. He decided to embark on the journey for a second time this year, so on May 17, he began traveling all 50 states again.

In the first three weeks, Smith has visited over 20 states. When he spoke to CBS News on Thursday, June 7, he was in North Carolina. He had already mowed about three lawns there, he said, and was about to head out for South Carolina. After South Carolina, he was going to stop in Savannah, Georgia, and then keep on going.

The "50 Yards in 50 States" title is a bit misleading, since he doesn't just mow one lawn in each state. In the past, he has done up to four a day. But on this trip, he wants to do a bit less so he can focus more on talking to people.

"This time I'm stopping in schools and organizations...talking to kids about community service," Smith said.

Smith says he pre-plans where he is going to stop in each state. "Before I started the tour, I showed people which state in each city I was going to, and asked if they could submit lawns of disabled people, single moms, vets, whoever needed their lawn mowed for free," he says. People cans submit suggestions for Smith on his website.

"If I don't have enough [requests in an area], I go on Facebook or Twitter and say, 'I'm here, does anyone know a disabled person, single mom, vet, whose lawn needs to be cut?'"

His says his social media pages have been the best tool for the charity. He updates them often with photos from his travels.

He says the lawn care company Briggs and Stratton helped sponsor his trip across the U.S. and gave him a new mower for the journey. "I also have supporters that sponsor my rooms, and meet up with me, and give me gas cards," Smith says.

As for his favorite place to visit, he says New York City is up there on his list. He took a break from mowing lawns to get some pizza and go sightseeing in the Big Apple.

When asked about his favorite people he'd met, Smith had a harder time answering, but one couple stood out to him. "There was a husband and wife in Vermont. A year before, they were struck head-on by a car. They were on a motorcycle... They almost lost their lives," Smith says. "The husband has a traumatic brain injury and he can't do anything."

"I came to cut his lawn and it meant a lot to him," Smith says.

Smith says starting this charity has showed him his true passion in life: to help people. After receiving his bachelor's degree in computer science, he went back to school to get a master's in social work. He graduated just about a month ago, he says.

Smith doesn't know exactly when he'll complete this year's trek across all 50 states, but he's almost halfway there. Sometimes kids who have joined Raising Men Lawn Care come out and help Smith when he's mowing lawns in their state.

He hopes his travels help the movement grow. "I hoping on starting chapters in all 50 states to get even more kids involved," he says. "I'd like to see it become a national program some day."

He's planning to reward volunteers who successfully complete the 50 yard challenge. "When they complete 50, we go surprise them, mow lawns with them and give them a brand new lawn mower," he says.

He's also hoping to start a scholarship program for the kids who complete the challenge and continue to do well in school. "They are doing so much for their communities, that its important to give back to them for their education," Smith says.

When Smith stops to talk with people on his travels and takes photos with them, he's always flashing a peace sign. He hopes this journey is spreading peace as well.