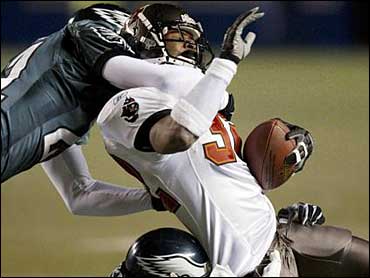 The Oakland Raiders and the Tampa Bay Bucaneers are ready for the Super Bowl this Sunday in San Diego.

In Oakland, the Raiders passed and brawled their way to a 41-24 victory over the Tennessee Titans in the AFC title game on Sunday, getting three touchdown throws from 37-year-old Rich Gannon.

The thirtysomething group of Jerry Rice, Bill Romanowski, Rod Woodson and — finally — Tim Brown, sent the Raiders and their maverick owner, Al Davis, to the NFL title game for the first time in 19 years.

They'll go for their fourth Super Bowl title next Sunday in San Diego, taking on the Tampa Bay Buccaneers, who beat the Philadelphia Eagles 27-10 in the NFC championship game earlier in the day.

Oakland's oft-touted "Commitment to Excellence" will be tested by a coach who knows it well — Jon Gruden, who left the Raiders after last season for the Bucs.

On a clear, perfect day at a stadium known as the Black Hole, the Raiders looked as much like the old brawling group of renegades they used to be as the new pass-happy team they have become.

The old: 14 penalties for 127 yards, a handful of cheap shots and a bevy of vicious hits on Steve McNair, who paid a huge price for every throw he made and the two rushing touchdowns he scored.

The new: Unbelievably, Oakland called exactly one running play over the first three quarters, leaving the work to Gannon, the league MVP who threw 41 times for 286 yards and also scrambled for 42 more, including a fourth-quarter touchdown.

But this was more than just a highlight show for the Oakland offense.

The Raiders took the lead for good late in the second quarter, when Eric Barton stripped Tennessee's Robert Holcombe, giving Oakland the ball at the Tennessee 16. Two plays later, Gannon hit tight end Doug Jolly for a score and a 21-17 lead.

On the next play, special teams got into the act, forcing a fumble by John Simon and setting up a field goal for a seven-point lead at the half.

Oakland tackled punter Craig Hentrich to set up a field goal for a 10-point lead in the third.

McNair was then at his gutty, gritty best, leading the Titans on a 67-yard touchdown drive to make it 27-24.

Tennessee appeared to be stopped on that drive, but Terrance Shaw got called for a personal foul, Oakland's fourth of the game. On the next play, McNair ran in from 13 yards for his second score.

But the Raiders kept picking on Tennessee's pass defense, rated 25th in the regular season. Gannon led Oakland on a 66-yard drive and ran in himself for a 34-24 lead.

That drive, like this game, was nothing pretty, but then again, Davis has never demanded perfection.

The owner's unspoken message in "Just Win Baby" has always been his desire to field a team that could win even the ugly games.

In that vein, he signed a group of veterans who had endured a lot in this league: Mere penalties and a hot quarterback weren't going to be enough to halt this Super Bowl run.

The Titans fell for just the second time since Oct. 6, when a loss to Washington dropped them to 1-4.

After being stunned by a Philadelphia touchdown in the first minute of the NFC Championship game, the Bucs' defense shut down Donovan McNabb and company to beat the Eagles 27-10.

Tampa Bay did it by overcoming all sorts of history — three consecutive losses at Veterans Stadium without an offensive touchdown; only one win ever in temperatures under 40; and the hostile fans and slippery turf in the Vet's final NFL game.

After the first brief Eagles flurry, sparked by Brian Mitchell's 70-yard return of the opening kickoff, it was all Tampa Bay, which led 17-10 at halftime and stifled Philadelphia after intermission.

Mike Alstott was one of several Bucs wearing short sleeves, almost in defiance of the 26-degree cold at kickoff. The wind chill was 16.

Alstott scored on a 1-yard run at the end of a 96-yard drive in the first quarter that was highlighted by Joe Jurevicius's 71-yard catch-and-run.

Brad Johnson threw a 9-yard TD pass to Keyshawn Johnson in the second quarter, and Ronde Barber's 92-yard interception return with 3:12 left in the game clinched it after the Eagles had driven 73 yards to the Bucs 10. Martin Gramatica kicked two field goals.

Brad Johnson finished 20-of-33 for 259 yards against a Philadelphia secondary with three Pro Bowl selections, allowing the Bucs to control the ball and the clock, especially in the first half.

The defense, meanwhile, totally controlled McNabb, who finished 26-of-49 for 247 yards. Simeon Rice and Barber had sacks that ended potential rallies.

That was enough to send a franchise with one of the NFL's most dismal histories to pro football's ultimate game for the first time. From 1983-96, the Bucs did not have a winning season and lost 10 or more games in 13 of those 14 seasons.

The chill didn't bother them Sunday, nor did the surroundings.

Tampa Bay silenced the Vet fans with that long first-quarter drive, and by game's end, the notoriously fickle Philly fans were booing every incomplete pass by McNabb.

Mitchell's return of the opening kickoff and Duce Staley's 20-yard touchdown run two plays later gave the Eagles a 7-0 lead 52 seconds into the game. But that was the high point of the first half for Philadelphia.

Tampa Bay got three points back on its first possession on Gramatica's 48-yard field goal.

Then, after Lee Johnson's punt pushed them back to their own 4-yard line, the Bucs went on their long drive to take a 10-7 lead. It was their first offensive touchdown in four games in Philadelphia over the past three seasons.

The key play came on third-and-2 from the 24, when Brad Johnson found Jurevicius on a crossing route 15 yards downfield.

Jurevicius, who rejoined the team Saturday after going home for the premature birth of his son, broke away from Barry Gardner and ran to the Eagles 5-yard line.

Two plays later, Mike Alstott went in from a yard out.

But the Bucs took the ensuing kickoff and went 80 yards in 12 plays, scoring from 9 yards out when Johnson (Brad) found Johnson (Keyshawn) just over the goal line on a third-down play.

The Eagles reached the Tampa Bay 24 in the final minute of the half, but McNabb was sacked by his old high school teammate, Simeon Rice, who knocked the ball loose and recovered the fumble to end the threat.

The same thing happened on the Eagles' first possession of the third quarter, Barber knocking the ball loose on a corner blitz and Ellis Wyms recovering at the Philadelphia 47.

Gramatica added a 27-yard field goal with 1:02 left in the third quarter to make it 20-10 as the Eagles continued to have trouble moving the ball.