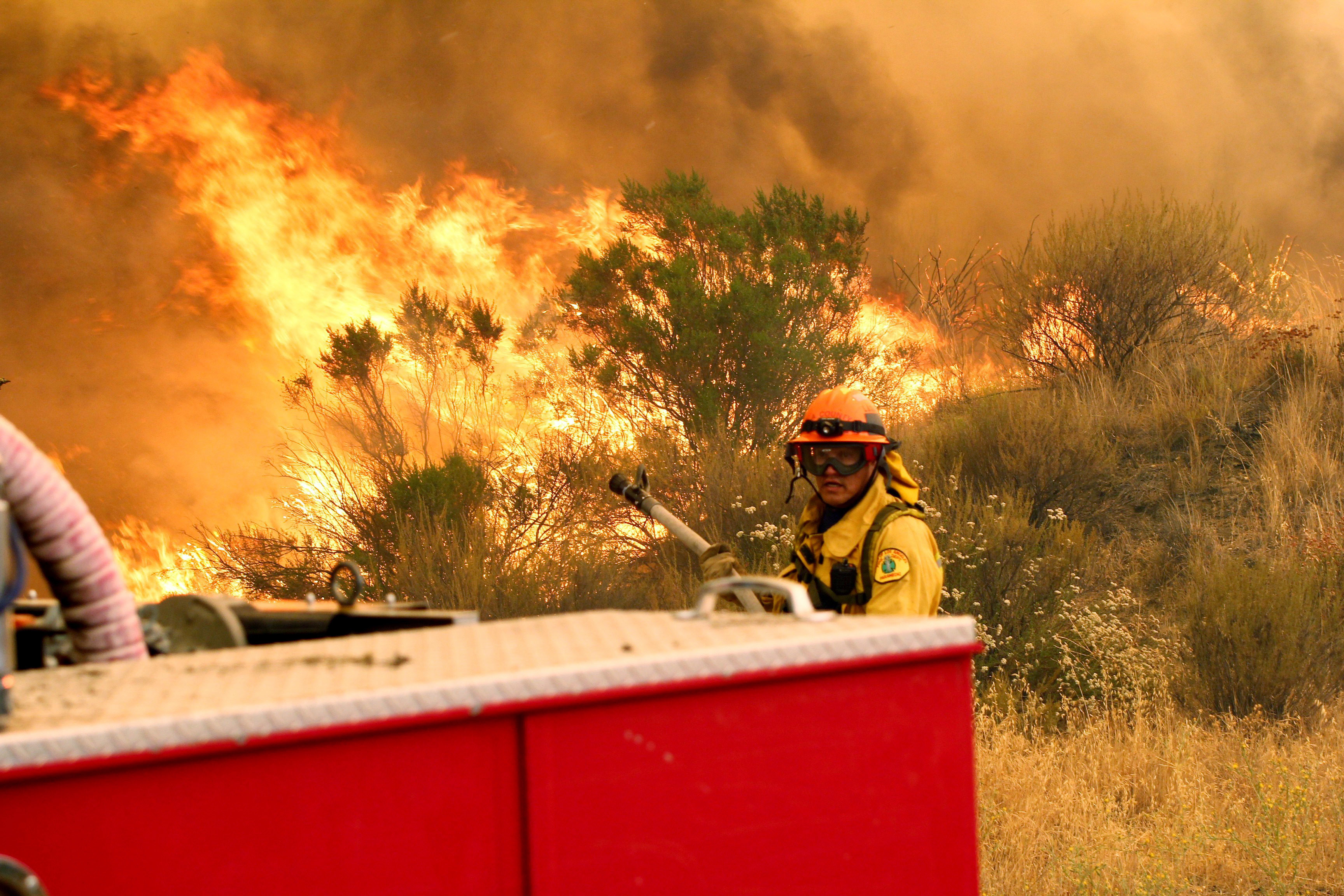 The fire that has destroyed at least 18 homes in northern Los Angeles County gained ferocious new power two days after it broke out, sending so much smoke in the air that planes making drops on it had to be grounded for part of the afternoon.

"For this time of year, it's the most extreme fire behavior I've seen in my 32-year career," County fire Chief Daryl Osby said.

Jay Nichols, a Forest Service spokesperson, said an unmanned aerial vehicle was spotted in the Bear Divide area of the Angeles National Forest.

The discovery prompted fire officials to suspend aerial assaults for a mandatory period of 30 minutes.

According to a fire official on-scene, one person has been detained in connection with the drone incident.

About 300 miles up the coast, crews were battling another fire that forced evacuations outside the scenic Big Sur region.

Authorities in the area found a burned body in a car, and were investigating.

Planes were unable to make drops over the fire for a long stretch of the afternoon, but helicopters were releasing retardant around the perimeter.

"The fire's just doing what it wants right now," U.S. Forest Service spokesman Nathan Judy said. "We have to stick back, let it do what it wants to and attack it where we can."

Juliet Kinikin said Sunday there was panic as the sky became dark with smoke and flames moved closer to her home a day earlier in the Sand Canyon area of Los Angeles County.

"And then we just focused on what really mattered in the house," she said.

Kinikin grabbed important documents and fled with her husband, two children, two dogs and three birds. They were back at home Sunday, "breathing a big sigh of relief," she said.

Steve Arkin and Derek Hunt own 650 acres in the affected area.

"At some point, you know you're defeated and you have to step back and save what you can and we fought as best as we could," Hunt told CBS News' Mireya Villarreal. "Helicopters were dropping and water and everybody was doing their best to save it."

Residents of thousands of homes were evacuated, and a 40-mile stretch of State Route 14, known as the Antelope Valley Freeway, was closed except for those evacuating. Shifting winds were pushing flames northeast through Angeles National Forest, where additional evacuations were ordered in the city of Acton and other residents were warned to prepare to leave, authorities said.

The fire has ripped through brush withered by days of 100-degree temperatures and years of drought.

More than 1,600 firefighters were battling the flames threatening homes and commercial buildings. The blaze, whose cause is under investigation, sent up a huge plume of smoke visible across the region.

The fire destroyed film sets at Sable Ranch in Santa Clarita, which has Old West-style buildings used for movie locations. It also forced a nonprofit sanctuary for rescued exotic creatures to evacuate 340 of its more than 400 animals, including Bengal tigers and a mountain lion.

Volunteers showed up with trucks and trailers and evacuated animals from early Friday to late Saturday, when fire officials felt the blaze was no longer a threat to Wildlife Waystation in Sylmar, spokesman Jerry Brown said.

"The fire surprised everyone and seemingly came out of nowhere," Brown said Sunday. "But things are looking up, and officials say that although they have some hotspots near where we are, they don't see any active fire."

The evacuated animals were housed in three or four locations, and the sanctuary will wait at least 24 hours before bringing them back, Brown said.

North on the Central Coast, a blaze consuming brush in rugged mountains near Big Sur was threatening about 1,650 homes. It burned in inaccessible terrain 5 miles south of Garrapata State Park and forced the communities of Palo Colorado and Carmel Highlands to evacuate, California's forestry department said.

Brock Bradford lives in a historic house in Palo Colorado and could see the flames coming down the road as he evacuated.