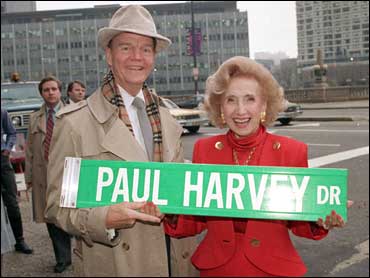 Paul Harvey, the news commentator and talk-radio pioneer whose staccato style made him one of the nation's most familiar voices, died Saturday in Arizona, according to ABC Radio Networks. He was 90.

Harvey died surrounded by family at a hospital in Phoenix, where he had a winter home, said Louis Adams, a spokesman for ABC Radio Networks, where Harvey worked for more than 50 years. No cause of death was immediately available.

Harvey had been forced off the air for several months in 2001 because of a virus that weakened a vocal cord. But he returned to work in Chicago and was still active as he passed his 90th birthday. His death comes less than a year after that of his wife and longtime producer, Lynne.

"My father and mother created from thin air what one day became radio and television news," Paul Harvey Jr. said in a statement. "So in the past year, an industry has lost its godparents and today millions have lost a friend."

Known for his resonant voice and trademark delivery of "The Rest of the Story," Harvey had been heard nationally since 1951, when he began his "News and Comment" for ABC Radio Networks.

He became a heartland icon, delivering news and commentary with a distinctive Midwestern flavor. "Stand by for news!" he told his listeners. He was credited with inventing or popularizing terms such as "skyjacker," "Reaganomics" and "guesstimate."

"Paul Harvey was one of the most gifted and beloved broadcasters in our nation's history," ABC Radio Networks President Jim Robinson said in a statement. "We will miss our dear friend tremendously and are grateful for the many years we were so fortunate to have known him."

In 2005, Harvey was one of 14 notables chosen as recipients of the presidential Medal of Freedom. He also was an inductee in the Radio Hall of Fame, as was Lynne.

He composed his twice-daily news commentaries from a downtown Chicago office near Lake Michigan.

Rising at 3:30 each morning, he ate a bowl of oatmeal, then combed the news wires and spoke with editors across the country in search of succinct tales of American life for his program.

At the peak of his career, Harvey reached more than 24 million listeners on more than 1,200 radio stations and charged $30,000 to give a speech. His syndicated column was carried by 300 newspapers.

His fans identified with his plainspoken political commentary, but critics called him an out-of-touch conservative. He was an early supporter of the late Sen. Joseph McCarthy and a longtime backer of the Vietnam War.

Perhaps Harvey's most famous broadcast came in 1970, when he abandoned that stance, announcing his opposition to President Nixon's expansion of the war and urging him to get out completely.

"Mr. President, I love you ... but you're wrong," Harvey said, shocking his faithful listeners and drawing a barrage of letters and phone calls, including one from the White House.

In 1976, Harvey began broadcasting his anecdotal descriptions of the lives of famous people. "The Rest of the Story" started chronologically, with the person's identity revealed at the end. The stories were an attempt to capture "the heartbeats behind the headlines." Much of the research and writing was done by his son, Paul Jr.

Harvey also blended news with advertising, a line he said he crossed only for products he trusted.

Harvey was born Paul Harvey Aurandt in Tulsa, Okla. His father, a police officer, was killed when he was a toddler. A high school teacher took note of his distinctive voice and launched him on a broadcast career.

While working at St. Louis radio station KXOK, he met Washington University graduate student Lynne Cooper. He proposed on their first date (she said "no") and always called her "Angel." They were married in 1940 and had a son, Paul Jr.

They worked closely together on his shows, and he often credited his success to her influence. She was inducted into the Radio Hall of Fame in 1997, seven years after her husband was. She died in May 2008.