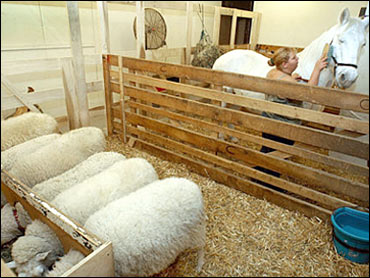 But it's not the noise. Except for an occasional bleat from the sheep, the four-legged stars of the "Christmas Spectacular" sleep soundly. Their human handler, Bambi Brook, dozes fitfully in her makeshift apartment across from the donkey pen and below the stage, where she lives throughout the eight-week run of the show to take 24-hour care of her flock.

"I run up and check the camels or make sure everybody is safe and sleeping. I don't think I really sleep well for eight weeks, just because the responsibility level is so great," Brook said. "You've brought them into this environment, and you have to make sure they're safe and comfortable."

Brook wakes the animals at 5 a.m. each day and takes the horse and camels outside for a walk on city streets that are just beginning to swell with fast-walking workers and meandering tourists.

Some passers-by stop to greet the camels, sometimes giving them treats and always asking questions. No, they don't spit (these are well-behaved, theater camels), no, they're not cold (camels can adjust their body temperature) and yes, they can have a bagel (hey, it's New York City).

The camels, sheep and donkeys play themselves in a 10-minute nativity scene at the close of the 90-minute show. The sheep and donkeys ride the elevator up from their dressing room, one floor below stage level, just passing the Rockettes coming off stage in sparkly tights and reindeer hats. Brook and her assistants dress as shepherds or camel handlers and guide the animals through the scene.

Her company, Dawn Animal Agency, provides creatures for film and television. The animals in the Christmas show rotate with others that live on 250 acres in Westtown, N.Y., about 75 miles from Manhattan.

Ted, the 10-year-old, 1,400-pound camel with a prima donna attitude, who is considered the star above all others, was home this week for a break.

Brook said the animals are watched for signs that they're tired or not enjoying the work. How can she tell?

"Look, he's making happy ears at us," Brook said, hanging over the edge of the horse pen, pointing at Angel, a white horse who pulls a carriage across the stage past dancers and ice skaters in a scene called "White Christmas in New York." With ears earnestly upright, Angel munched a mouthful of hay.

And sure enough, his ears were similarly cocked forward during his big scene in that day's first show.

Brook struggles to explain how she gets animals to perform. Sometimes she can't even describe it to her assistants.

More than being trained, she said, animals have to trust that "they're going to be safe in any environment, whether it's on the street or in the theater or on the farm," said Brook, a small, muscular woman who talks so fast that she often interrupts herself.

The U.S. Department of Agriculture also checks on the furry performers, making surprise visits to Radio City to examine sleeping areas, and to watch the performance to make sure they're treated well.

Brook's mother founded the talent agency and the Sanctuary for Animals in 1960 with 30 creatures. Now, more than 750 live there - 75 percent of them rescued. They are guaranteed a home, even if they are not among the 10 to 15 percent that perform.

The agency won't say what the animals are paid for their work, but Brook said the Christmas show, which they've been doing for more than 20 years, is essential to the operation.

"This is our big moneymaking project for the sanctuary, and without this contract, the sanctuary wouldn't be able to help as many animals as it does," she said.

The animals in the show don't perform elsewhere during the year. But the agency keeps busy providing animals for high-profile television shows like "Law & Order," which always needs rats, and "Sex and the City," where one of their dogs had a long run as Pete, the pet of Carrie's ex-fiance, Aidan.