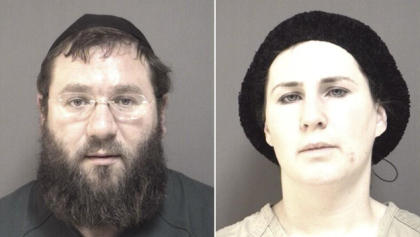 NEWARK, N.J. -- Authorities say eight people, including a New Jersey rabbi, have been charged in a conspiracy to defraud Medicaid and other public assistance programs of more than $1 million.

According to CBS New York, Rabbi Zalmen Sorotzkin of Congregation Lutzk in Lakewood and his wife, along with several other couples, were taken into custody during early morning raids at four homes.

Ocean County Prosecutor Joseph Coronato said more arrests are expected as a result of the investigation.

Zalmen Sorotzkin's brother, Mordechai, and his wife, Rachel, were charged in a federal complaint along with another married couple with conspiring to fraudulently obtain Medicaid benefits, Section 8 housing benefits and food assistance benefits.

Mordechai and Rachel Sorotzkin allegedly made more than $1 million in 2012 and in 2013, yet the couple used Medicaid to pay for about $22,000 in medical expenses when their sixth child was born in November 2013, the complaint alleges.

The couples were scheduled to appear in court Monday afternoon. The phone at the synagogue rang unanswered Monday morning.

"Financial assistance programs are designed to alleviate family hardships for those truly in need. My office gave clear guidance and notice to the Lakewood community in 2015 of what is considered financial abuse of these programs," Coronato said in a statement. "Those who choose to ignore those warnings by seeking to illegally profit on the backs of taxpayers will pay the punitive price of their actions."

According to the federal complaint, Yocheved and Shimon Nussbaum hid their income by creating companies that they controlled, but were run by relatives.

The couple made approximately $265,000 in 2011 -- more than double the maximum amount that one is allowed to receive Medicaid benefits for, and more than triple the maximum for Section 8 benefits, according to the complaint.

The investigation was initiated by the FBI and the New Jersey Office of the State Comptroller. It later expanded to include U.S. Social Security Administration, the state Department of the Treasury and the Ocean County Prosecutor's Office.