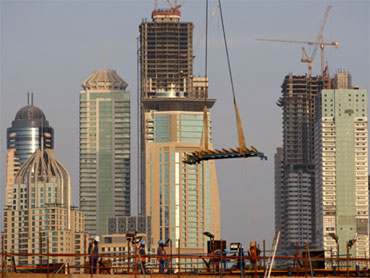 The twin blows came as the sheikdom's finance chief raised new questions about the pace of restructuring at government-owned Dubai World, the debt-saddled conglomerate now at the heart of the emirate's credit mess.

Abdul Rahman al-Saleh, the finance department's director-general, said restructuring the sprawling conglomerate — which has operations the world over ranging from ports to real estate to tourism — would take more than six months. He also said the group's property arm Nakheel had received government aid, but that the cash injection was distinct from any state guarantee of debt now owed to banks worldwide.

Lenders until two weeks ago had assumed Dubai's many state-affiliated companies had implicit government backing — an assumption Dubai officials have since debunked.

"We've taken the message on board," Philipp Lotter, Moody's senior vice president, said in an interview after the credit agency cut ratings on government-linked companies it covers. "The consequences of this precedent have become very clear in Dubai. Companies are now viewed on a very much stand-alone basis."

Dubai shocked markets a day before the U.S. Thanksgiving holiday with the announcement that Dubai World would seek a "standstill"

effectively a delay — on repaying some of its debts until at least May. The company later said it wanted to restructure roughly $26 billion of its debts, and Dubai officials have indicated that an asset sale was possible.

The news has hammered local markets.

Shares on the Dubai Financial Market tumbled 6.1 percent to close at 1,638.05. An accelerated slide since October has now left prices where they were at the end of 2008, effectively erasing a year's worth of gains.

The bourse in Abu Dhabi — the neighboring oil-rich emirate that is home to the United Arab Emirates' federal government — dropped by over 3.3 percent. Most other Gulf markets also fell.

Al-Saleh told the Saudi-owned satellite channel al-Arabiya that the government has previously given Nakheel, Dubai World's property developer subsidiary, $2.45 billion to pay its bills. He did not say when the funds were pumped into the struggling company. Spokesmen for the department could not be reached.

"The government is present to provide backing as an owner. ... We would like to emphasize the distinction between guaranteeing (debts) and backing. The company (has received) large backing from the government since its inception," al-Saleh said, according to segments of the interview published online.

Nakheel, builder of Dubai's iconic palm-shaped islands, is a key focus of Dubai's debt problems because some $3.5 billion worth of its Islamic bonds come due Monday. The company's ability to repay the loans has become seen as a test of Dubai's overall creditworthiness.

While Dubai is insisting it does not guarantee its companies' debts, it has chosen to provide some help to those it sees as central to the sheikdom's success.

Dubai officials have previously said Nakheel received emergency government funds to shore up its finances earlier this year as it struggled with plunging property prices and a cash squeeze. The size of the cash injection had not previously been made public.

Analysts believe the overall debt restructuring may mushroom beyond the $26 billion figure Dubai World announced last week was its focus.

"We believe that it would be unlikely that the restructuring process would be restricted to the recently announced amount," they wrote in a research report obtained Tuesday.

Each of the companies except Emaar is majority-owned by Dubai's government or its leader. The state owns nearly a third of Emaar and is in the process of merging it with other companies controlled by Dubai's hereditary ruler.

All the ratings are below investment grade — a status known in the industry as "junk."

Moody's has already downgraded the six borrowers once since Dubai announced its restructuring plans last month. Lotter said further cuts were possible. Dubai itself does not hold a sovereign credit rating.