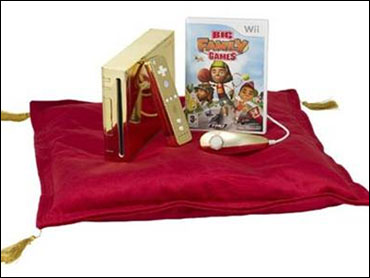 If Queen Elizabeth decides to play some video games, she could do it in style -- with a gold-plated Wii!

The Queen won't have to wait in line like everyone else for Nintendo to release a Wii console in any color other than white.

"BIG Family Games is the ultimate Wii game to get all family members, from grandparents to young children, playing together," said THQ product manager Danielle Robinson.

"But we thought that Her Majesty the Queen wouldn't want to play on any old console, so an extra-special gold one was commissioned," he added. "We hope that she and the rest of the Royal Family enjoy the game!"