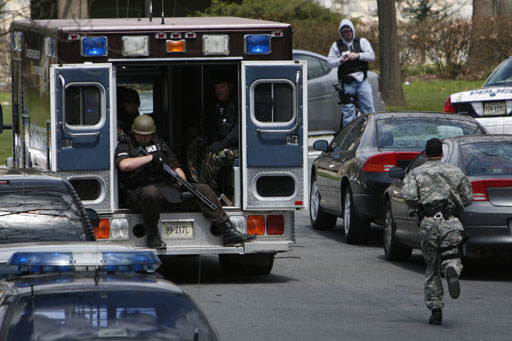 “Sorrow reduces when you share it,” Vajpayee said ahead of the call the first reported conversation between the leaders of two countries that have fought three wars in 47 years and tested nuclear weapons in 1998.

Vajpayee thanked Musharraf for two planeloads of relief that Pakistan sent to Gujarat, where a 7.7 magnitude earthquake hit Jan. 26, an Indian spokesman said. Pakistan said it hoped the talks would lead to further contacts.

Vajpayee has avoided speaking to Musharraf since the military leader came to power in October 1999. The two countries battled in May-July 1999 in border clashes that Vajpayee blamed on Musharraf, head of Pakistan's armed forces, prompting the Indian leader to break off contacts.

Musharraf called Vajpayee, “to convey his sympathy at the great loss of life caused by the earthquake in Gujarat,” said Mohammed Bashir, an official in Vajpayee's office.

The earthquake also killed 18 people in Pakistan's Sindh province, on the other side of the border from Gujarat.

The quake's full toll in India may never be known because many of the dead may have been cremated in remote villages or may still be buried under flattened towns and cities. An estimated 600,000 people were left homeless.

With all the homeless, relief experts feared thousands also would die of exposure from the cold nights.

Disease is also a rapidly mounting threat. No outbreaks have been reported yet, but malaria, cholera and severe diarrhea are a threat to the homeless packed into camps with no running water or toilets and relying on communal kitchens for food.

Before Musharraf called, Vajpayee had told an audience in New Delhi he might speak to the Pakistani leader. “Maybe I'll talk to Musharraf tonight,” he said. “We might find some way out.”

Vajpayee also said he wanted to clear up reported remarks by Musharraf last week that India had rejected Pakistan's offer of quake aid. “There was a bit of misunderstanding earlier,” Vajpayee said. “We never said we would not accept theihelp.”

Asked about the possibility of resuming the stalled dialogue between the two countries, Press Trust of India quoted Vajpayee as saying, “We have always favored talks for which the right atmosphere has to be created. Violence, killings and terrorism must stop and the climate should be such that fruitful and meaningful parleys can take place.”

Musharraf has repeatedly offered talks anywhere, anytime over Kashmir, the Himalayan province that has sparked two of the three wars between the countries since their independence from Britain in 1947.

India accuses Musharraf of aiding Islamic militants who have been fighting since 1989 to separate the Indian-controlled portion of Kashmir. Musharraf has said Pakistan does not aid them, only gives them moral support.

Vajpayee had refused to speak to Musharraf because he blames the Pakistani general for instigating an incursion in early 1999 across the cease-fire line that divides Kashmir. Hundreds of combatants were killed before the intruders withdrew into Pakistan after intercession by former President Clinton.