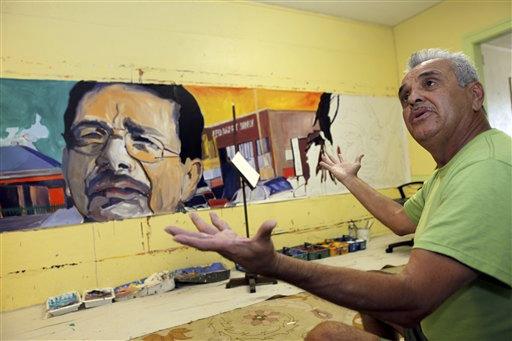 "It is predicted — and it's still a rough estimate — that the number of the victims of dead may be between 1,000 and 2,000," Vice President Jusuf Kalla told the el-Shinta radio station on Tuesday morning.

He said the estimate was based on the number of buildings damaged when the quake hit about an hour before midnight Monday, not on bodies counted. Local officials earlier said nearly 300 were dead.

"I don't know if it was a rolling thing or a shaking thing, but I could notice everyone in front of me bouncing off the walls," Catholic Relief Services president Ken Hackett told CBS News. Hackett was in a Sumatra hotel and went running into the hall.

"You couldn't walk straight, you went from side to side and it was kind of an eerie, uncontrollable feeling," said Hackett.

Early reports suggested the town of Gunungsitoli on Nias, which lies off Sumatra island's western coast, was worst hit.

"From the window I see very high flames," the Rome-based missionary news agency MISNA quoted Father Raymond Laia as saying by telephone. Laia was stationed about two miles from town. "The town is completely destroyed," Laia said, adding that he heard reports that thousands were injured.

The earthquake — the largest aftershock yet of the massive 9.0-magnitude temblor that caused the Dec. 26 Indian Ocean tsunami — triggered panic in several Asian countries when governments issued warnings that another set of deadly waves may be about to hit.

Coastal residents from Indonesia to Thailand to Sri Lanka fled to higher ground, before hearing hours later that no killer waves had materialized.

In Banda Aceh, capital of Indonesia's Aceh province, which was hardest-hit by the December tsunami, the latest quake cut electricity and thousands of people poured into the streets, most getting into vehicles to flee low-lying areas.

"People are still traumatized, still scared, they are running for higher ground," said Feri, a 24-year-old recovery volunteer who like many Indonesian goes by one name.

In Banda Aceh, where hundreds of thousands of people still live in camps after the December tsunami, people panicked and fled their tents overnight, some crying out "Alahu Akbar!" or "God is great.

"It was like reliving the same horror of three months ago," said Fatheena Faleel, who fled her home with her three children after seeing television warnings.

The quake was felt as far away as Thailand, Malaysia and Singapore, more than 435 miles miles from the epicenter.

About 70 percent of the houses and buildings in the market area in Gunungsitoli town collapsed from Monday night's quake, local police Sgt. Zulkifli Sirait said.

Another police officer, who identified himself as Nainggolan, said rescuers were trying to pull people out of the rubble and struggling with a lack of electricity. Many people were panicking because of aftershocks, he said.

"We badly need paramedics to treat people who have lost limbs or people suffering after being trapped under the rubble," Mendrofa told Metro TV.

Dave Jenkins, a New Zealand physician and surfer who runs the relief agency SurfAid International from the western Sumatran city of Padang, said he feared for the safety of about 10,000 people living on the tiny Banyak Islands, close to the undersea quake's epicenter.

He said he was departing for the islands in a boat carrying enough medical supplies to treat 10,000 people for three months.

"We're sending two doctors and two nurses. I'll get up there myself," he told The Associated Press.

In Washington, U.S. State Department deputy spokesman Adam Ereli said American diplomatic missions in Asia and Africa are in "battle mode" so that they could respond quickly to any contingency.

Nias, a renowned surfing spot, was badly hit by the Dec. 26 earthquake and subsequent tsunami that killed at least 174,000 people in 11 Indian Ocean nations. In that quake, at least 340 Nias residents perished and 10,000 were left homeless.

Indonesian officials said the epicenter of Monday's quake was 56 miles south of the island of Simeulue, off of Sumatra's western coast, and just north of Nias.