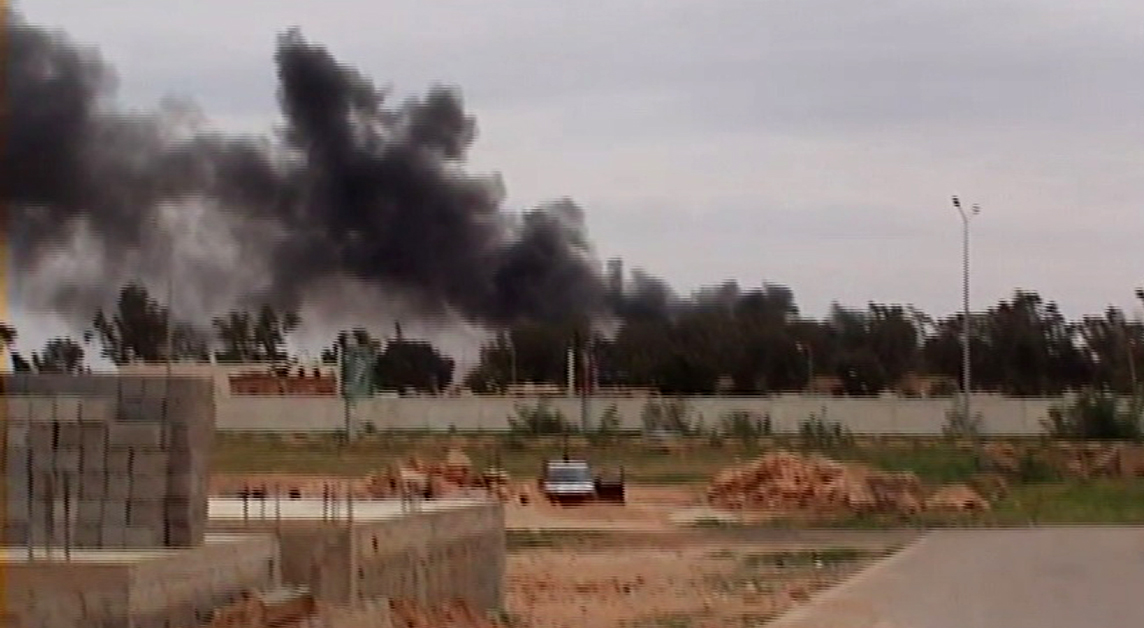 TOBRUK, Libya - Muammar Qaddafi vowed to launch a final assault on the opposition's capital Benghazi and crush the rebellion as his forces advanced toward the city and warplanes bombed its airport Thursday. In the face of Qaddafi's increasingly powerful offensive, the United Nations was to vote on a mandate Washington seeks to strike his forces on land, sea and air.

After weeks of hesitancy over imposing a no-fly zone in Libya, the United States made a dramatic about-face, calling for even more expanded action, including strikes on Qaddafi's ground forces besieging rebel-held cities.

The U.N. Security Council scheduled a vote early Thursday evening on a resolution that would open the way for that, establishing a no-fly zone but also authorizing member states to take all necessary measures" to protect civilians from attacks by Qaddafi's forces.

The change reflected the past week's swift reversal of the realities on the ground, where once-confident rebels are now in danger of being crushed under an overpowering pro-Qaddafi force using rockets, artillery, tanks, warplanes. That force has advanced along the Mediterranean coast aiming to recapture the rebel-held eastern half of Libya.

Qaddafi troops encircled the city of Ajdabiya, the first in the path of their march, but also had some troops positioned beyond it toward Benghazi, Libya's second largest city and the headquarters of the opposition's leadership.

In an address Thursday evening, Qaddafi proclaimed that the "hour of decision has come" and that his regime would begin "tonight" to put an end to the rebellion.

"The matter has been decided ... we are coming," he said, calling in by telephone to state TV and addressing the people of Benghazi. He said there would be amnesty for those "who throw their weapons away," but for those who resist "there will be no mercy or compassion."

Qaddafi says his forces would "rescue" the people of Benghazi from "traitors" and warned them not to stand alongside the opposition.

"The people will see tomorrow if the city if one of traitors or heroes ... Don't betray me, my beloved Benghazi."

The closest known position of Qaddafi's ground forces from Benghazi was still about 80 miles (130 kilometers) to the south, making it unclear if they would move on the city Thursday night as Qaddafi boasted. But during the day, several regime warplanes boombed the city's Benina Airport.

Several witnesses said rebels in Benghazi succeeded in shooting down at least two of the attacking aircraft. Mohammed Abdel-Rahman, a 42-year-old merchant who lives nearby, said he saw one of the warplanes shot down after striking Benina — a civilian and military air facility about 12 miles (20 kilometers) from the center of the city. He said the strikes caused light damage.

Another witness, medical official Qassem al-Shibli, told The Associated Press that he saw three planes attack the airport and nearby rebel military camps before two were shot down. A third witness saw fire trucks fighting a blaze at the airport, and black smoke billowing from the area. Another witness reported that a rebel warplane crashed north of Benghazi, apparently after running out of fuel.

At the same time, the rebels were sending their own warplanes in an attempt to break the regime's assault on Ajdabiya, a city about 100 miles (150 kilometers) southwest of Benghazi that has been under a punishing siege by Qaddafi's forces the past two days. Three rebel warplanes and helicopters struck government troops massed at Ajdabiya's western gates, said Mustafa Gheriani, a spokesman in Benghazi, and Abdel-Bari Zwei, an opposition activist in Ajdabiya.

But by Thursday afternoon, Qaddafi's army were holding the southern, eastern and western outskirts of Ajdabiya. Further outflanking the rebels, troops landing from sea swept into the nearby Mediterranean port town of Zwitina, 15 miles (25 kilometers) north, between Ajdabiya and Benghazi.

Ajdabiya, with some is the first rebel-held city in the east that Qaddafi troops have tried to recapture, heavily bombarding it since Tuesday, with rockets and shells raining down on residential areas, according to witnesses. Most of the non-male population has fled. At least 30 people have been killed and 80 wounded since the siege began, according to an official at the hospital. He said medicines were running out and that electricity in the city was off and on. That may be in part from rebels themselves, who have shut off power at night to hide their movements.

Fierce battles erupted between rebels and government troops at the city's southern gates in the pre-dawn hours Thursday, said Zwei. He and other residents told AP that Qaddafi forces were remaining on the city outskirts, occasionally clashing and bombarding but still not able — or trying — to moving into the center where rebel fighters were dug in.

Zwei said the forces may be trying to tie down rebels in Ajdabiya while other troops go around the city to assault Benghazi.

Benghazi, Libya's second largest city with a population of more than 700,000, was gearing up for the defense.

Gheriani, the opposition spokesman, told AP the city was "armed to the teeth" and the opposition is ready to defend it. Young men were volunteering for basic military training with army units allied to the rebellion, said one resident, speaking on condition of anonymity for fear of future persecution by Qaddafi's regime.

More checkpoints were popping up at intersections and on main roads, manned by men in uniform armed with AK-47s and backed by anti-aircraft guns mounted on pickup trucks, in the city, 620 miles (1,000 kilometers) east of Tripoli along the Mediterranean coast. The Red Cross said it was leaving Benghazi because of deteriorating security and moving to the city of Tobruk, further east.

Libyan officials were also vowing to retake Misrata, the last rebel-held city in the western half of the country, which has been sealed off by Qaddafi troops in a blockade that has cut off most water and food supplies for days, residents said.

"The Libyan forces are surrounding the city and will move in slowly to avoid casualties. They will be done by tomorrow if not today," government spokesman Ibrahim Moussa told reporters in the capital.

Wednesday night, Qaddafi forces besieging Misrata launched a heavy assault that doctors at the city hospital said left 18 dead, according to Mokhtar Ali, an opposition figure in exile outside Libya who was in touch with relatives in the city. During the day Thursday, the forces remained on the outskirts of Misrata, Libya's third largest city, 125 miles (200 kilometers) southeast of Tripoli

Gheriani said by telephone from Benghazi that the opposition was hoping for a positive U.N. Security Council vote but "if not, we'll rely on ourselves and do what we can."

Western military action against Qaddafi's forces could dramatically change the balance of power on the ground.

France's U.N. Ambassador Gerard Araud said he expects more than one of the council's 15 members to abstain when the vote takes place at 6 p.m. EDT (2300 GMT) on the resolution, but council diplomats said they do not expect it to be vetoed.

The draft resolution would "establish a ban on all flights in the airspace" in Libya and authorize members to take "all necessary measures" to protect civilians and populated areas under threat of attack "including Benghazi, while excluding an occupation force."

The United States already has warships positioned near Libya. U.S. Ambassador Susan Rice said the Obama administration is "fully focused on the urgency and the gravity" of the situation in Libya. After eight hours of closed-door talked Wednesday, she said a no-fly zone now was not enough, saying it has "inherent limitations in terms of protection of civilians at immediate risk."