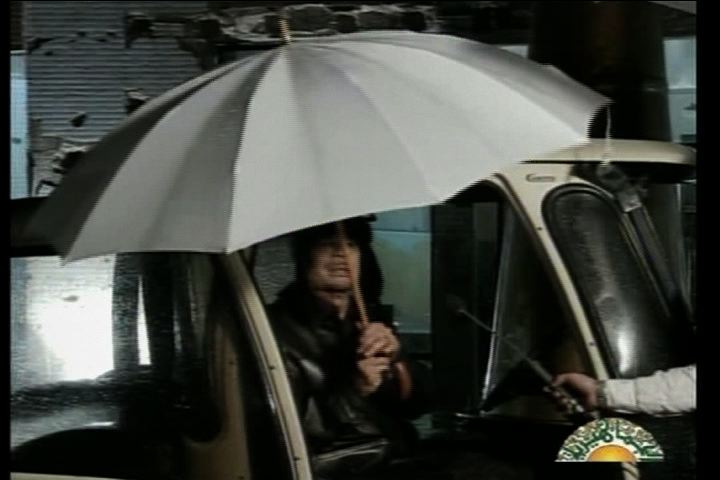 CAIRO - Libyan leader Muammar Qaddafi has appeared for less than a minute on state television and made brief remarks to say he was in the capital Tripoli and deny rumors he had to fled to Venezuela amid the unrest sweeping his country.

Qaddafi was seated in the passenger seat of a car holding an umbrella up through the open door. It has been raining in the capital for two days. His remarks were aired about 2 a.m. local time on Tuesday.

Qaddafi said that the rain proved that he was in Tripoli and not in Venezuela, urging the people not to believe the claims of "dog stations" that he had left the country.

"I am here to show that I am in Tripoli and not in Venezuela. Don't believe those misleading dog stations," he said, referring to the media reports that he had left the country. (Watch video below). Deep cracks opened in Qaddafi's regime Monday, with Libyan government officials at home and abroad resigning, air force pilots defecting and a bloody crackdown on protest in the capital of Tripoli. World leaders were outraged at the "vicious forms of repression" used against the demonstrators. Pro-Qaddafi militia drove around Tripoli with loudspeakers and told people not to leave their homes, witnesses said, as security forces sought to keep the unrest that swept eastern parts of the country — leaving the second-largest city of Benghazi in protesters' control — from overwhelming the capital of 2 million people. State TV said the military had "stormed the hideouts of saboteurs" and urged the public to back security forces. Protesters called for a demonstration in Tripoli's central Green Square and in front of Qaddafi's residence, but witnesses in various neighborhoods described a scene of intimidation: helicopters hovering above the main seaside boulevard and pro-Qaddafi gunmen firing from moving cars and even shooting at the facades of homes to terrify the population. Youths trying to gather in the streets were forced to scatter and run for cover by the gunfire, according to several witnesses, who like many reached in Tripoli by The Associated Press spoke on condition of anonymity for fear of reprisal. They said people wept over the bodies of the dead left in the street.