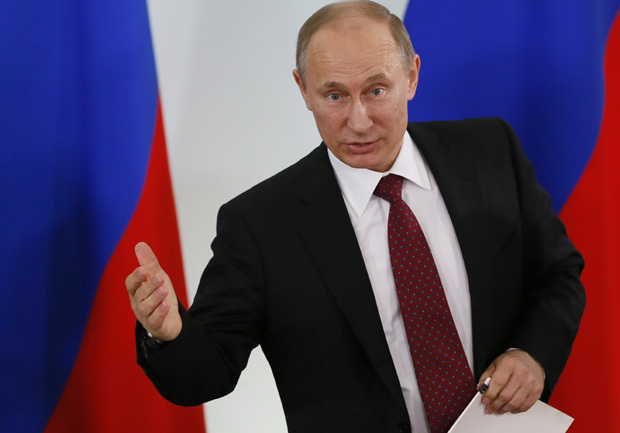 In comments reported by Russian news agencies during a meeting with students, Putin noted that Snowden flew to Moscow on June 23 "without invitation," intending only to transit to another country.

But Putin says the United States intimidated other countries against accepting Snowden, effectively blocking him from flying further.

"Such a present to us. Merry Christmas," he was quoted as telling the students on the Gulf of Finland island of Gogland.

Snowden said last week he would apply for Russian asylum. The status of that application is unclear.

Russian news agencies said Monday no formal application had been received. The Federal Migration Service told The Associated Press it had no information on the matter.

Snowden previously had sought Russian asylum, which Putin said would be granted only if he agreed not to leak more information. Snowden then withdrew the bid, Russian officials said.

But in a meeting in the Sheremetyevo airport international transit zone on Friday, Snowden expressed willingness to make that agreement, participants in the meeting said.

Putin did not say Monday if that would be sufficient grounds for asylum. "Judging by the latest statement, he has somehow changed his position, but the final situation still has not been clarified," he said, according to the ITAR-Tass news agency.

Venezuela, Bolivia and Nicaragua have offered Snowden asylum, but getting there from Moscow without passing through U.S. airspace or that of Washington's allies would be difficult. The U.S. has annulled his passport.

Putin said Monday that Snowden apparently did not want to stay in Russia permanently.

But when asked where he would go, Putin said "How would I know? It's his life, his fate."

Granting asylum to Snowden could be fraught with peril for Russia, aggravating tensions with the United States less than two months before Putin and President Barack Obama are to meet in Moscow and again at the G-20 summit in St. Petersburg.

Anatoly Kucherena, a well-known lawyer in Russia, said on Friday that he would be helping Snowden with the necessary paperwork to officially request asylum, CBS News' Svetlana Berdnikova reports from Russia.