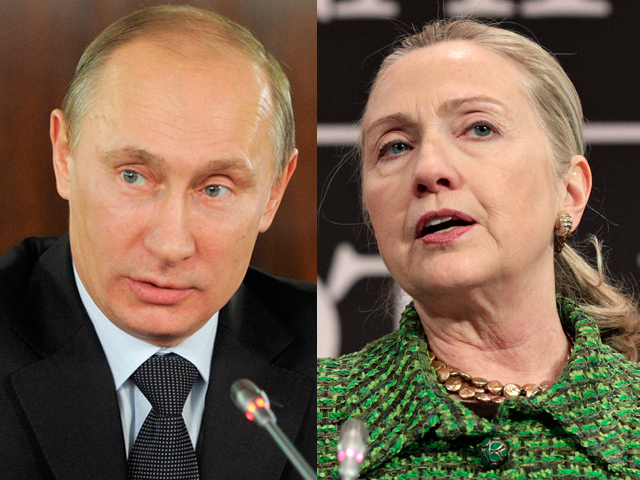 By describing Russia's parliamentary election as rigged, Putin said Clinton "gave a signal" to his opponents.

"They heard this signal and with the support of the U.S. State Department began their active work," Putin said in televised remarks. He said the United States is spending "hundreds of millions" of dollars to influence Russian politics with the aim of weakening a rival nuclear power.

Putin's tough words show the deep cracks in U.S.-Russian ties despite President Obama's efforts to "reset" relations with the Kremlin. Ahead of the election, President Dmitry Medvedev threatened to deploy missiles to target the U.S. missile shield in Europe if Washington failed to assuage Moscow's concerns about its plans.

She confirmed her stance again on Thursday, saying the concerns over voting fraud in Russia's election were "well founded". She did not directly address Putin's claims that the opposition movement in Russia was being supported or encouraged by the U.S.

But she also reached out to Russia.

"I think it's important to recognize that we value our relations with Russia," she said at a NATO meeting in Brussels, where she also met with Russian Foreign Minister Sergey Lavrov. "We have invested a great deal of effort on working together ... and we have made progress."

Russian protesters have taken to the streets in Moscow and St. Petersburg for three straight nights despite a heavy police presence, outraged over observers' reports of widespread ballot box stuffing and manipulations of the vote count. This week has seen some of the biggest and most sustained protests Russia has faced in years, and police have detained hundreds of protesters.

Thousands were expected to join protests in Moscow and other cities on Saturday.

Putin's United Russia party barely held onto its majority in parliament, with official results giving it about 50 percent of the vote, down from 64 percent four years ago. But the fraud allegations indicate that support for United Russia was even lower than that, and Russians appear to be growing weary of Putin and his party after nearly 12 years in office.

Putin was president from 2000 until 2008, when he moved into the prime minister's office to abide by a constitutional limit on two consecutive terms. He intends to reclaim the presidency after an election in March that would give him at least six more years in power.

Putin's return to the Kremlin still seems assured, but he clearly has been shaken by the outburst of public anger and it is not yet clear how much of a challenge it will pose to his power.

Moscow has already put about 50,000 police and 2,000 paramilitary troops on the streets, backed by water cannon.

Putin warned that the government might take an even harder line against those who try to influence Russia's political process on behalf of a foreign government.

He accused the U.S. State Department of spending "hundreds of millions" of dollars in Russia and his government has to "work out ways to protect our sovereignty from outside interference."

"We are the largest nuclear power," Putin said, addressing supporters during a televised meeting. "And our partners have certain concerns and shake us so that we don't forget who is the master of this planet, so that we remain obedient and feel that they have leverage to influence us within our own country."

He said "especially unacceptable is the infusion of foreign money into the electoral process."

Russia's only independent election monitoring group, which is supported by grants from the United States and European governments, has come under heavy official pressure in recent weeks. The Golos website documenting violations was hacked and the group was fined the equivalent of $1,000 after prosecutors accused it of violating election law.

Also Thursday, Russia's top election official urged prosecutors to study photographs and video clips circulating on social networking sites that purport to show election fraud, and signaled that those who posted the materials could be punished.

If the images show genuine violations, they will be investigated, Central Election Commission chief Vladimir Churov said. But if evidence is found that the photographs and videos were "provocations" or faked, those who created, commissioned or sponsored them will be held to account, he said.

Opposition groups have called for a mass protest near the Kremlin on Saturday. More than 28,000 people have now signed up to a Facebook page on the protest.

A map circulating on the Internet shows protests planned for Saturday in more than 75 cities around Russia, while a page on LiveJournal lists more planned anti-vote fraud protests in 15 countries around the world.