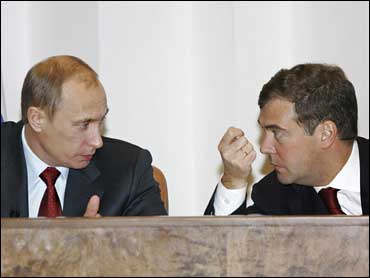 President Vladimir Putin told a party congress Monday that he would accept the prime minister's post if his longtime protégé is elected president, guaranteeing Putin an ongoing heavyweight political role in Russia.

Ending speculation that he had another surprise up his sleeve in this tumultuous election season, Putin also said he would not - as had been widely expected - seek to strengthen the post of prime minister at the expense of Russia's powerful presidency.

"If the citizens of Russia show trust in Dmitry Medvedev and elect him the new president, I would be ready to continue our joint work as prime minister, without changing the distribution of authority," Putin said. Later, the party nominated Medvedev as its candidate.

Putin's promise Monday to accept the premiership from Medvedev puts what looks like the last piece of Russia's leadership puzzle in place.

Medvedev, 42, is seen as a moderate technocrat rather than a Kremlin hawk. He seems certain to win the March 2 presidential contest, thanks to Putin's endorsement.

Putin, with approval ratings above 80 percent, has consolidated power during his nearly eight years in office by extending government control of the media and nominally independent institutions such as the courts and parliament.

Despite Putin's pledge not to undermine Medvedev, many analysts expect the center of power to shift from the presidency to the prime minister's post if and when Putin assumes the office.

Putin has insisted for years that he would relinquish power once his second presidential term ended. The constitution limits presidents to two consecutive terms.

But as Putin's retirement date approached, he seemed to have second thoughts. In November, he said a victory in parliamentary elections by United Russia would give him the "moral authority" to ensure that his policies are continued. The party won the Dec. 2 vote with an overwhelming majority of seats.

White House press secretary Dana Perino said it was "an internal political decision that the Russians are going to have make," adding that she anticipates U.S.-Russian relations will stay strong.

"As to who will be their president and their prime minister, that will be for them to decide," she said.

Speaking at the meeting of the United Russia party, which won 70 percent of the seats in parliament, Putin once again called for voters to elect Medvedev as president.

"I will not be ashamed or afraid to turn over the levers of control over the country - the fate of Russia - into the hands of such a person," said Putin, 55, in a hall decorated with the white, red and blue colors of the Russian flag.

Later, Putin looked on sternly from the podium as Medvedev accepted the nomination, and the younger man promised would follow the blueprint that Putin has drafted for Russia. And the best way to do that, he said, would be with Putin serving as head of his cabinet.

"The full implementation of this strategy is possible only together with its author, Vladimir Vladimirovich Putin," Medvedev said.

While Putin vowed in his remarks not to try to usurp power from his former aide, Medvedev stressed Putin's continuing influence over Russian affairs.

"I don't have the slightest doubt that Vladimir Vladimirovich Putin, in the future, will keep using his enormous political and professional resources, his influence both in our society and in the world, for the benefit of Russia and its citizens," he said.

The relationship between the two men is sometimes described as similar to that between a father and son.

Putin's acceptance of Medvedev's offer came amid reports of infighting between different factions in the Kremlin, led by rival figures tied to Russian intelligence and security agencies.

Some analysts say Putin is the only figure capable of preventing the government from fracturing into rival camps of these powerful figures.

Monday's announcement came a few days after Putin led a delegation to the neighboring Belarus, to discuss long-stalled plans for a merger of Russia and the former Soviet republic. Those talks apparently made little headway.

Some analysts say Putin plans to accept the prime minister's post only as a temporary measure. If Medvedev were to step down, Putin could - under the constitution - run again.

Medvedev, married with one son, is a trained lawyer who first caught the attention of Russia's future president in 1990 when both worked in St. Petersburg's city hall. For most of the next 17 years, he served as one of Putin's most trusted aides.