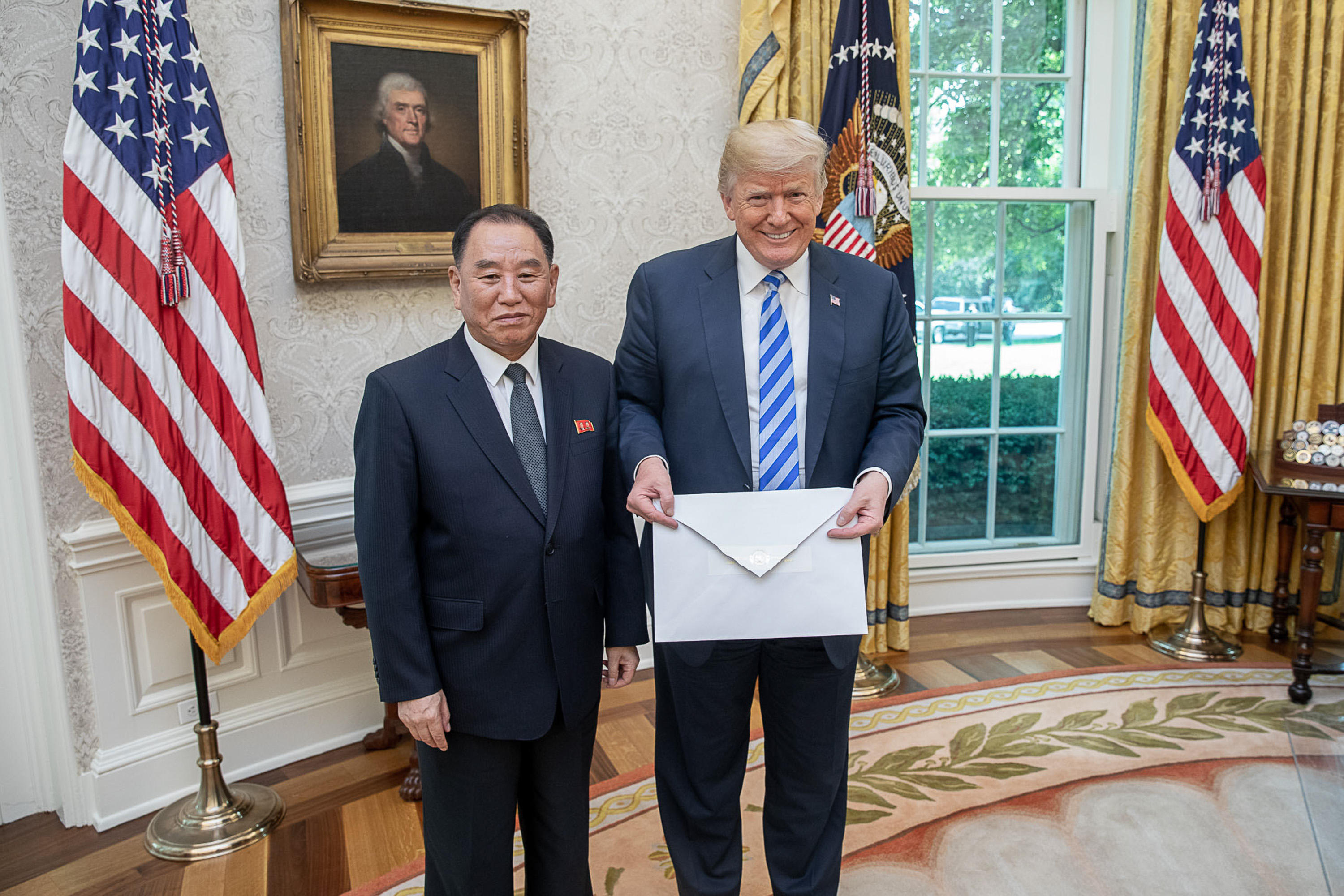 SEOUL, South Korea -- North Korean leader Kim Jong Un is known for pushing the envelope with threats and bluster as he seeks to leverage his nuclear weapons program into security and economic benefits for his country. But lately he's gained notoriety for his envelopes alone.

President Trump on Friday declared that his on-and-off summit with Kim was on again. The announcement came after Mr. Trump hosted a senior North Korean envoy at the White House and he delivered a personal letter from Kim that was inside a white envelope nearly as large as a folded newspaper.

Mr. Trump has not yet revealed what was written in the letter, but he sure seemed happy to get it. A photo showed a grinning Trump holding up the envelope alongside Kim Yong Chol, the most senior North Korean to visit the White House in 18 years, as they posed in the Oval Office in front of a portrait of Thomas Jefferson.

The photo made rounds on social media, where theories abound about why Kim would have sent Trump what seemed like a comically oversized letter.

Mr. Trump told reporters after the meeting that it was a "very nice letter," minutes later clarifying that he hadn't opened it yet and could be in for a "surprise." The president called the summit back on before reading the letter.

"I haven't seen the letter yet," Mr. Trump told reporters after previously seeming to indicate he had. "I purposely didn't open the letter. I haven't opened it. I didn't open it in front of the director."

The White House confirmed later in the day that he had indeed eventually read the letter.

Did Kim, a third-generation heredity leader, think Mr. Trump would share his love for lavish gestures and things grandiose? After spending months trading insults and war threats with him, has Kim learned that the way to influence Mr. Trump is to appeal to his ego -- something South Korean President Moon Jae-in seemed to try in April when he openly vouched for Mr. Trump as a candidate for the Nobel Peace Prize?

No one outside North Korea likely knows the real reason for the letter's size. It could just be that's how Kim likes it.

Moon, who lobbied hard for nuclear negotiations between Mr. Trump and Kim, received a letter of similar size from Kim during February's Winter Olympics in which he expressed a desire for an inter-Korean summit.

Kim's to letter to Moon was personally delivered by Kim's sister, who attended the Olympics as a special envoy, and was covered by a blue folder emblazoned with a golden seal.

Analysts say the gesture of sending the letter itself is part of the meticulous steps North Korea is taking to present Kim as a legitimate international statesman who is reasonable and capable of negotiating solutions and making deals. These kinds of displays are also what critics fear could be used as traps to appease Mr. Trump.

Following a provocative 2017 in which his engineers tested a purported thermonuclear warhead and long-range missiles that could target American cities, Kim has engaged in a flurry of diplomatic activity in recent months in what's seen as an attempt to break out of isolation and obtain relief from sanctions decimating his country's economy.

While trying to communicate its willingness to embrace Western diplomatic norms, Pyongyang has put in painstaking efforts to maintain reciprocity with Washington and Seoul, said Yang Moo-jin, a professor at the University of North Korean Studies in Seoul.

Kim Yong Chol's trip to Washington was clearly a response to U.S. Secretary of State Mike Pompeo's traveling to Pyongyang, North Korea's capital, twice in recent weeks for pre-summit negotiations with Kim. Likewise, Kim's letter to Mr. Trump would have been a reciprocal response to Trump's own letter to Kim on May 24 that temporarily shelved the highly anticipated meeting, Yang said.

In his letter printed on White House stationery, Mr. Trump said he was canceling the summit because of North Korea's harsh comments about U.S. officials. But he also told Kim "please do not hesitate to call me or write."

North Korea then issued an unusually conciliatory response to Mr. Trump's letter, with senior diplomat Kim Kye Gwan saying in a statement that Pyongyang had "highly appreciated" Mr. Trump's willingness to hold a summit, calling it a "bold decision, which any other U.S. presidents dared not." Hours later, Mr. Trump said the summit was potentially back on.

"We are having very productive talks with North Korea about reinstating the summit which, if it does happen, will likely remain in Singapore on the same date, June 12th, and, if necessary, will be extended beyond that date," Mr. Trump tweeted last night.

Kim's letter to Mr. Trump on Friday will probably borrow much of the language from the statement of his vice foreign minister, said Koh Yu-hwan, a North Korea expert at Seoul's Dongguk University.

"Kim would begin by praising Trump's leadership and his 'bold decision' to build up the summit," said Koh, who is also a policy adviser to the South Korean president. "He will then talk about denuclearization, ending hostility and normalizing relations between the countries."

Because of the directness and weight of formality they provide, Kim might see personal letters as an important way to communicate with leaders of countries the North never had close ties with, Koh said.

This sets Kim apart from his father and grandfather, who were never bold proponents of letter diplomacy and mostly limited the exchange of letters and telegrams with traditional ally Beijing and, to a lesser extent, Moscow.

It remains unclear whether North Korean Vice Marshal Jo Myong Rok was carrying a letter from the late Kim Jong Il, the second North Korean leader, when he visited former President Bill Clinton at the White House in 2000.