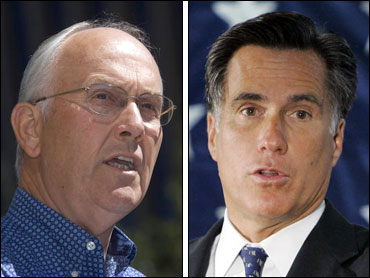 Republicans in Washington greeted the morning with a collective groan at the news that embattled Sen. Larry Craig might be trying to find some wiggle room in his "intention" to resign at the end of this month. From a legal point of view, Craig may yet find a leg to stand on in his quest to clear his name. But the political reality is something altogether different.

GOP leaders came out of the Labor Day weekend mostly thankful for the quick end to the Craig story. After a week in which "wide stance" found its way into the nation's lexicon and an examination of another Republican politician caught in one way or another with his pants down, at least it appeared to be in the rear-view mirror with Craig's resignation announcement. But just when they seemed to have found a way out, Republicans were suddenly pulled right back in.

There is almost no chance Craig will be hanging on to his Senate seat past the end of the month, regardless of what happens on the legal front. But expect the party's presidential candidates to be asked about it in their televised debate tonight. Mitt Romney, who counted Craig as one of his Senate supporters, wasted no time in distancing himself from the scandal, calling his behavior "disgraceful." You're not going to find anyone on stage tonight supporting anything but a resignation by the senator.

The list of GOP problems has ballooned over the past two years: The Iraq war, Hurricane Katrina and scandals involving former Rep. Mark Foley and Sen. David Vitter. Craig has become just another millstone around the necks of the candidates seeking to carry the GOP banner into the 2008 election.

The candidates have shown a willingness to begin distancing themselves from the president and party that have controlled Washington for the better part of the past six years - but those criticisms have largely been peripheral, so as not to offend the still-solid base that will decide the nomination. Tonight's debate takes place in New Hampshire, a state with large numbers of the kinds of independent voters Republicans will need to compete in 2008 and beyond. It wouldn't be the worst occasion for the candidates to start remaking the party's image. They can thank Larry Craig for the opening. - Vaughn Ververs

Not Changing Course: If there were still any doubt that Hillary Clinton isn't willing to let Barack Obama or John Edwards become the "change candidate" of this election, her new ad - her first to air in New Hampshire - should quiet any skeptics.

Titled - you guessed it - "Change," the ad, also airing in Iowa, makes the argument that Clinton will provide a clean break from the previous administration by ending the war in Iraq, giving health coverage to everyone and making the United States independent of foreign oil. In a statement announcing the ad, the Clinton campaign touted poll numbers that indicate Democrats think Clinton, more than her rivals, would change the country's direction.

"By touting Hillary's experiences as a change agent, the Clinton campaign is making clear that to make change happen, you need the kind of strength and experience Hillary has accrued during her more than 35 years of advocacy," the campaign said.

Edwards and Obama were the ones who made change a central issue in the Democratic race, but it appears that Clinton doesn't mind. In fact, the ad suggest she's embracing the issue as her own. - David Miller

It's Thompson's Time: By this time tomorrow, Fred Thompson will finally, officially, without any doubt, be a candidate for president. But his last hours as a non-candidate will be just as teasing as the preceding months.

Many Republicans will watch tonight's GOP debate on Fox News Channel to hear from the eight announced candidates, but they probably won't hit the bathroom during commercials, waiting to hear Thompson's pre-announcement ad. We don't know exactly when it will air, but we do know what Thompson will say. And, as he has throughout the past few months, Thompson's words are geared at building the hype.

"On the next president's watch, our country will make decisions that will affect our lives and our families far into the future," Thompson says, looking into the camera. "We can't allow ourselves to become a weaker, less prosperous and more divided nation. Today as before the fate of millions across the world depends upon the unity and resolve of the American people. I talk about this tomorrow on Fred08.com. I invite you to take a look and join us."

Thompson still doesn't say the words that so many people have been expecting to hear from him, though the narrator at the end of the ad comes close, saying "Fred Thompson for president" at the end. To hear that from Thompson himself, Republicans will have to wait another day - literally. - David Miller

Bucks O'The Irish? The Clinton fundraising network is known for being broad and expansive. So broad, in fact, that it appears to have followed a rainbow to Ireland, where a pot o'campaign cash awaits Hillary Clinton - though her husband will be the one collecting it.

According to the BBC, Bill Clinton, who played a major role in the Northern Ireland peace process while president, will visit the Emerald Isle to raise money from American expatriates who support his wife's presidential bid. "I know there is a plan by the Clinton campaign to hold a fundraiser in Ireland for American citizens and green card holders," said Niall O'Dowd, an Irish-born publisher who's on Clinton's finance committee.

If the trip goes well, perhaps Ireland will become the next great resource for Democratic cash. Barack Obama can even trace part of his ancestry there - though he may need to slip an apostrophe into his last name first. - David Miller

Polling Amid Disaster: Natural disasters, terrorist attacks and political assassinations can make a pollster's job difficult, whether it complicates getting hold of the right people or even being able to get into work to do their job. But as CBS News' director of surveys Kathy Frankovic points out in this week's edition of Poll Positions, gauging public opinion in the wake of such events can provide incredibly important, useful information. Today's column also shows that polling can also perform a public service - it turns out people are more willing to talk to pollsters in tumultuous times than you might expect.