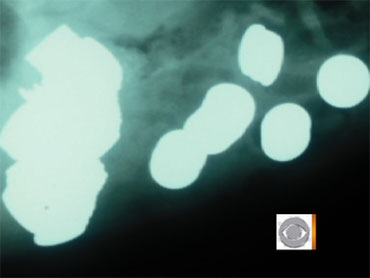 From wallets to keys, socks to sweaters, puppies get into almost anything. But for one family, puppy playtime was abruptly cut short when their baby French mastiff got into loose change.

"Early Show" resident veterinarian Dr. Debbye Turner Bell said, "Usually when a dog -- or a child for that matter -- swallows a coin, you just wait for it to pass out the other end -- if you get my meaning."

How to Puppy-Proof Your Home

But a puppy in Paw Paw, Mich., swallowed not one, not two, not even 20 pennies.

Bell said, "Let's just put it like this: You could buy a cup of coffee with the change in this poor pup's tummy."

With five dogs in their household, Jeff and Jodi Keelan have plenty of experience keeping puppies out of trouble. But their newest pooch, a four-month-old French mastiff coined Isis, Bell said, recently bit off much more than any dog could chew.

Jeff Keelan explained, "I was just laying in bed watching the news and I heard her throw up so I got out of bed, walked into the living room and there were eight or nine pennies on the floor."

Just to be safe, Jeff rushed Isis to an emergency clinic. Upon examination, a veterinarian discovered that the puppy had become a piggy bank. Isis' stomach and intestines were filled with pennies.

Jodi Keelan said she was shocked "because I don't know why you would eat that many (pennies)."

Emergency surgery revealed Isis had eaten 113 of them!

Veterinary surgeon Dr. Duane Baker said, "It is one of the most bizarre things. Never had a puppy eat pennies or anything like this before!"

Baker safely removed all the coins. But Isis' health was still in jeopardy.

Jodi said, "Even after surgery was over, we were still very worried, because one to three pennies can kill a puppy when the zinc gets into the bloodstream."

In 1983, the U.S. Mint began making pennies with a zinc core instead of copper. If a penny is scratched and the core is exposed, swallowing just a few can be fatal.

Baker said, "(There could have been) destruction of the red blood cells, kidney failure -- it would have been a sad death."

Thankfully, Isis' blood work showed that the pennies weren't inside her long enough to cause permanent damage. And finding those first eight pennies probably saved her life.

Since the surgery, Bell said things in the Keelan household have returned to normal -- except for one small change -- pennies are no longer allowed.