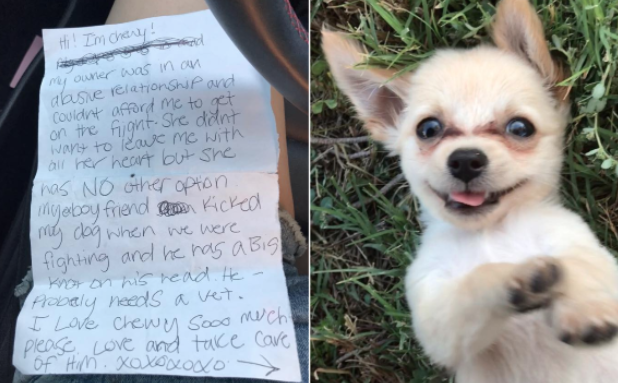 Thousands of people from across the country have been touched by the story of a woman who left her 3-month-old puppy behind in an airport bathroom because she had "no other option."

The Chihuahua mix named Chewy was found in a Las Vegas airport bathroom over the weekend along with a handwritten note explaining that the dog's owner was a victim of domestic violence.

"My owner was in an abusive relationship and couldn't afford me to get on the flight," the anonymous woman wrote in the note. "My boyfriend kicked my dog when we were fighting and he has a big knot on his head. He probably needs a vet."

Luckily, a McCarran International Airport employee who spotted the scared, four-pound dog was also a volunteer at a local animal rescue.

The airport worker asked Linda Gilliam, president of Connor and Millie's Dog Rescue in Las Vegas, if the shelter could take the pup in.

"You could tell this wasn't something [the dog's owner] wanted to do," Gilliam told CBS News. "This isn't how she wanted this to end, but she did the best she could to try to save herself and him at the same time. Abusers — they have no limits."

The dog was taken to a local animal hospital, where he was treated for a head and jaw injury.

As Chewy recovered, Gilliam posted the dog's story on Facebook and the message went viral with hundreds of shares and dozens of responses.

Within five days, the rescue received nearly 1,000 applications from people across the country hoping to adopt the small white dog. The response has been so overwhelming the shelter is no longer accepting applications.

Gilliam said she'll give Chewy's owner four weeks to claim the dog. If she doesn't come forward, the dog will be given to another family who lives in the state.

"A lot of people want to reunite the dog with his owner, but she has not come forward and I don't really expect her to ever be in a position to ever come forward," Gilliam said. "She did a very brave thing and hopefully she'll see that he's OK. He'll have a great life."

The shelter is being careful not to identify the dog's current foster mom or its location for safety reasons, Gilliam explained. And the dog's future family will also not be named.

"This dog is really helping highlight domestic abuse and the position victims are put in," Gilliam said. "They running for their lives —with pets and with children — so the message got out there. It got way out there, which is great. I'm really glad that it did."

While Gilliam is glad Chewy, who is "totally movie star material," is winning support from so many strangers, she also wants to remind potential dog owners that there are "thousands of Chewys out there, ready for a home." Her own shelter currently houses more than 200 dogs.

"Consider adopting from local shelters and rescues," she said. "There are great dogs that are being overlooked and didn't get all the media attention. They all have a story. I have a whole rescue full of dogs with stories."