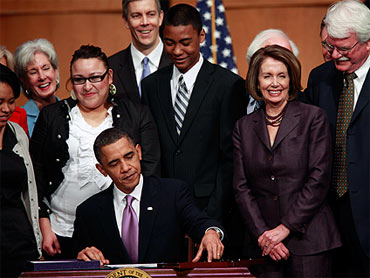 While polls show Americans remain sharply divided over the Democrats' landmark legislation, they aren't clamoring for its repeal.

Instead, the public seems willing to listen to candidates who would give the overhaul a chance and fix or improve it as needed. That's the signal from some surveys and a congressional race in a bellwether Pennsylvania district.

It's a pragmatic, somewhat counterintuitive outlook.

That could be a break for Democrats in the fall elections, since Republicans are campaigning hard for repeal of the health care law.

"Though most Americans still do not favor the law, they tend to be leaning toward candidates who would give it a chance and make some changes, rather than those who would repeal it and start over again," said Robert Blendon, a Harvard public health school professor who follows opinion trends on health care.

The law seeks to expand access to coverage by setting up competitive insurance markets and providing tax credits for many who can't afford premiums now. Most Americans will have to carry health insurance, and insurers will be barred from turning away people in poor health.

Those core provisions don't take effect until 2014, but tinkering has already begun.

Regulation writers at the Health and Human Services Department are filling in blanks that lawmakers left on critical consumer issues, such as guaranteed coverage for children with health problems. A House Democrat has introduced legislation to let federal employees keep young adult dependents on the government health plan this year, instead of making them wait until January.

Americans' nuanced outlook is reflected in some recent polls. For example, an NBC News/Wall Street Journal survey found the public tilting against the law 44-38, with 36 percent saying the quality of their health care would get worse, and only 17 percent believing it would improve. Not exactly a vote of confidence.

But when asked if they would be more likely to vote for a congressional candidate willing to give the law a chance to work and make changes as needed, or one who would repeal it entirely and start over, respondents picked the one who would give it a chance by 55-42.

Political independents favored giving the law a chance 57-40 in the poll, taken in early May.

The closest thing to a real life test of such findings may have been the hotly contested election to fill the seat of the late Rep. John Murtha, a powerful Democrat who had long represented his conservative, economically struggling district near Pittsburgh.

Mark Critz, a former Murtha aide who ran as the Democratic candidate, said he would have voted against the health care bill, but also opposed its repeal.

"The health care bill is the law," Critz said during the campaign. "Let's look at it. Let's fix the things that we can. Let's improve it where we can." Critz's comments were incorporated into a hard-hitting ad by his Republican opponent. But Critz won the May 18 special election.

"The repeal message is falling flat," said Maryland Rep. Chris Van Hollen, chairman of the Democratic Congressional Campaign Committee. "People want to work to implement the law and make changes as necessary, they don't want to go back and re-debate and re-litigate this whole issue."

Virginia Rep. Eric Cantor, the No. 2 House Republican, disagreed, saying "the health care issue was not determinative" in the Pennsylvania race, and "repeal and replace" remains an effective message for his party.

Still, Republicans face doubts about their own health care promises. An Associated Press-GfK poll in May found that 47-39 percent, Americans trust Democrats to do a better job of handling the issue. The trust gap persists despite the lack of popular support for the health care law. Indeed, respondents in the AP poll also said they opposed it by 46-39 percent.

None of this means Democrats are confident. Poll numbers on the new law are still too negative. Its complexity makes it hard to craft simple messages that sell the benefits.

"To date, the opposition has been more successful in defining (the law) than we have been," said Democratic pollster Celinda Lake. "The plan needs very careful and aggressive selling. There have been some efforts, but I think those efforts need to be quadrupled."