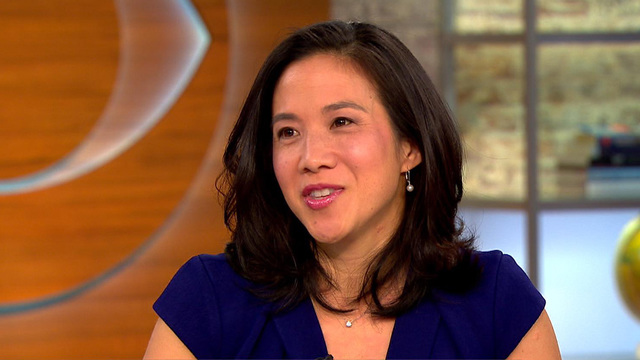 More Americans are likely to single out "natural talent" as the best predictor of success, but psychologist Angela Duckworth argues that talent is overrated in our society. In her new book, "Grit: The Power of Passion and Perseverance," she explains why they are wrong.

"Really, what matters in the long run is sticking with things and working daily to get better at them," Duckworth told "CBS This Morning" Tuesday.

"If you turn on a sports broadcast, you will invariably hear the word 'talent' within a minute. We just love to anoint our most successful athletes as prodigiously talented," Duckworth observes. But she says that's a misunderstanding.

Based on years of research, Duckworth, recipient of a 2013 MacArthur "genius" grant, determined that "grit" was the best indicator of success. She defined grit in her popular TED talk as a "passion and perseverance for very long-term goals." And unlike natural talent, Duckworth said grit is "absolutely teachable."

Rather than "skipping around," they "deepen their interests, then deliberately practice by working on their weaknesses with feedback," Duckworth explained. She also said people with grit are other-centered -- thinking about how their work is important to people other than themselves -- and resilient. "When they are knocked down, they get up again," she stressed.

Duckworth interviewed a top college admissions officer for her book, who weighed in on the importance of these qualities when selecting prospective students.

"They say that they want kids who work hard and you have a passion about something -- who aren't faking their way through school like they do -- but truly, in a sincere way, trying to get better at something they care about," Duckworth said.

At the same time, Duckworth asserts that sometimes quitting is good. From interning for the White House to teaching to consulting, it took Duckworth a good amount of quitting for her to finally discover that she wanted to become a psychologist at the age of 32.

"It wasn't just quitting for quitting's sake, but quitting so that I find something that I could be loyal to for the rest of my life, and I finally did find that," Duckworth explained.

While her research did not specifically look at how socioeconomic differences could play a factor, Duckworth said that from her experiences of working with kids of different backgrounds, "people are more the same than they are different."

"...I've never met someone who says, 'Because I was born in this situation, I don't need to work hard,'" Duckworth said.

Want to find out if you have the grit to be successful? Take this quiz to see how you rate on the Grit Scale.

"Grit: The Power of Passion and Perseverance," is published by Scribner, an imprint of Simon & Schuster, which is owned by CBS.