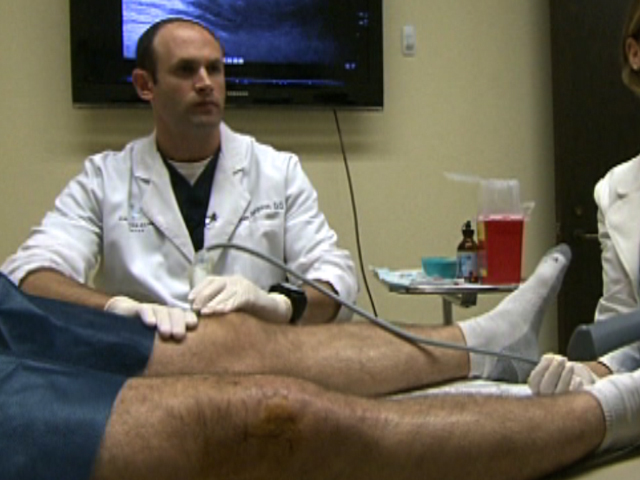 PRP therapy may be a way of fixing a muscle, tendon, or joint-related injury without surgery -- and it's really catching on.

The thing is, there's no firm evidence that this experimental treatment actually works.

CBS News medical correspondent Dr. Jon LaPook explains that the term PRP stands for "platelet-rich plasma" therapy. Platelets are a part of your blood that's responsible for clotting and healing.

"It's that healing power that first attracted professional athletes to it about five years ago," LaPook said. "Now, ordinary folks are requesting the treatment, and some swear by it."

After enduring years of chronic foot pain, Linda Leonard is thrilled to be back on horseback. While riding 15 years ago, her horse stumbled, prompting her to jump off. Leonard landed hard, shattering her ankle.

Leonard said of her injury, "The angle, weight, momentum, just blew (my ankle) apart into 40 places. And I thought. 'I'm in real trouble.' And I had to crawl out on my elbows, and I was laying on the side of the road."

After multiple surgeries, arthritis set in.

"People who live with pain every day -- it's exhausting," Leonard said. "It got to a point where I thought, 'Is this going to be my life? This is not even the essence of me; it's not me."'

Leonard spent years searching for relief. Then, in 2009, she heard about an experimental, non-surgical solution that claims to stimulate powerful healing. Leonard sought out Steven Sampson, an osteopath who offers PRP.

"What we do is we isolate the body's natural healing properties, called platelets," Sampson, of the Orthohealing Center, said. "We've learned that platelets release growth factors that stimulate repair."

The procedure is simple. A small amount of the patient's blood is spun in a centrifuge to separate and concentrate the platelets. Then they're injected into the injury. The cost varies from about $500 to $2,000, but is rarely covered by insurance because it's still experimental.

Sampson said, "We've had success from head to toe, from neck, back, hip, knee."

But thus far, studies have not produced convincing evidence that PRP is a magic bullet for tendon and muscle injuries.

Dr. Peter McCann, chairman of orthopedic surgery at Beth Israel Medical Center in New York City, said, "The PRP is equivalent to cortisone injections. There are a few studies that show slight improvement, but it's really not improvement that patients would appreciate."

That didn't stop former National Basketball Association star Maurice Taylor from trying it. He claims it eliminated pain in both of his knees.

"I'm very surprised because it's a quick treatment," Taylor said. "I'm surprised that a treatment that takes so little time has such big results."

McCann, who is also editor in chief of The American Journal of Orthopedics, says further studies are warranted

"The jury's still out," McCann said. "We need more studies to figure out if we can select out those patients who could really benefit because it does have great potential."

Taylor said, "I was off the court and away from training for two days, then the third day, I was playing basketball."

Taylor now plays for a team in China, and Leonard remains free of crippling pain.

"Maybe it won't work on everybody, but it worked on me," Leonard said. "It's given me my life back."

PRP has not yet been approved by the Food and Drug Administration, LaPook added on "The Early Show." The agency told CBS News that licensed medical practitioners can use it, but they cannot claim the treatment will actually correct any problem.

"Patients are coming in and asking for it, right?" LaPook said. "It's the classic clash between belief and evidence-based medicine. Last year, the International Olympic Committee commissioned a report saying, 'Let's look at the entire world literature and see (whether it works).' They found that it was safe so far, although there are no long-term studies, but in terms of it being effective, the jury is still out."

The results, LaPook said, are anecdotal up to now. "You know who was not in today's piece?" LaPook asked. "My friend, Richard, who had an injection in each Achilles tendon for $2,500 each, and it totally didn't work."

" ... I think there's a very important study that people need to go back to," LaPook continued. "About 10 years ago, everybody knew that, if you had arthritis of the knee, you do an arthroscopy, you clean things out, you smooth things out and you get better. So people said, 'I get better with this.' Well, so they said, 'Let's do a brave study,' and it was brave, 180 people, they divided them into three groups. One had the actual arthroscopy and they washed it out. Another had the debris cleaning procedures. The other had a placebo -- they did a couple of cuts and they did nothing. There was no difference between the three groups. And interestingly enough, all three groups got better. So what is the contribution of the placebo effect? Placebo is very powerful. And until you do these controlled studies, you know, you really don't know for sure."

When asked how this all plays out, LaPook said, "I think it goes to informed patient consent, informed decision-making, which is that the doctor says in the privacy of that office, what really goes on when you look at that patient in the eye, are you saying, 'I'm telling you, this works. In my hand, it works.' But are you saying the honest truth, which is, look, the jury is still out."