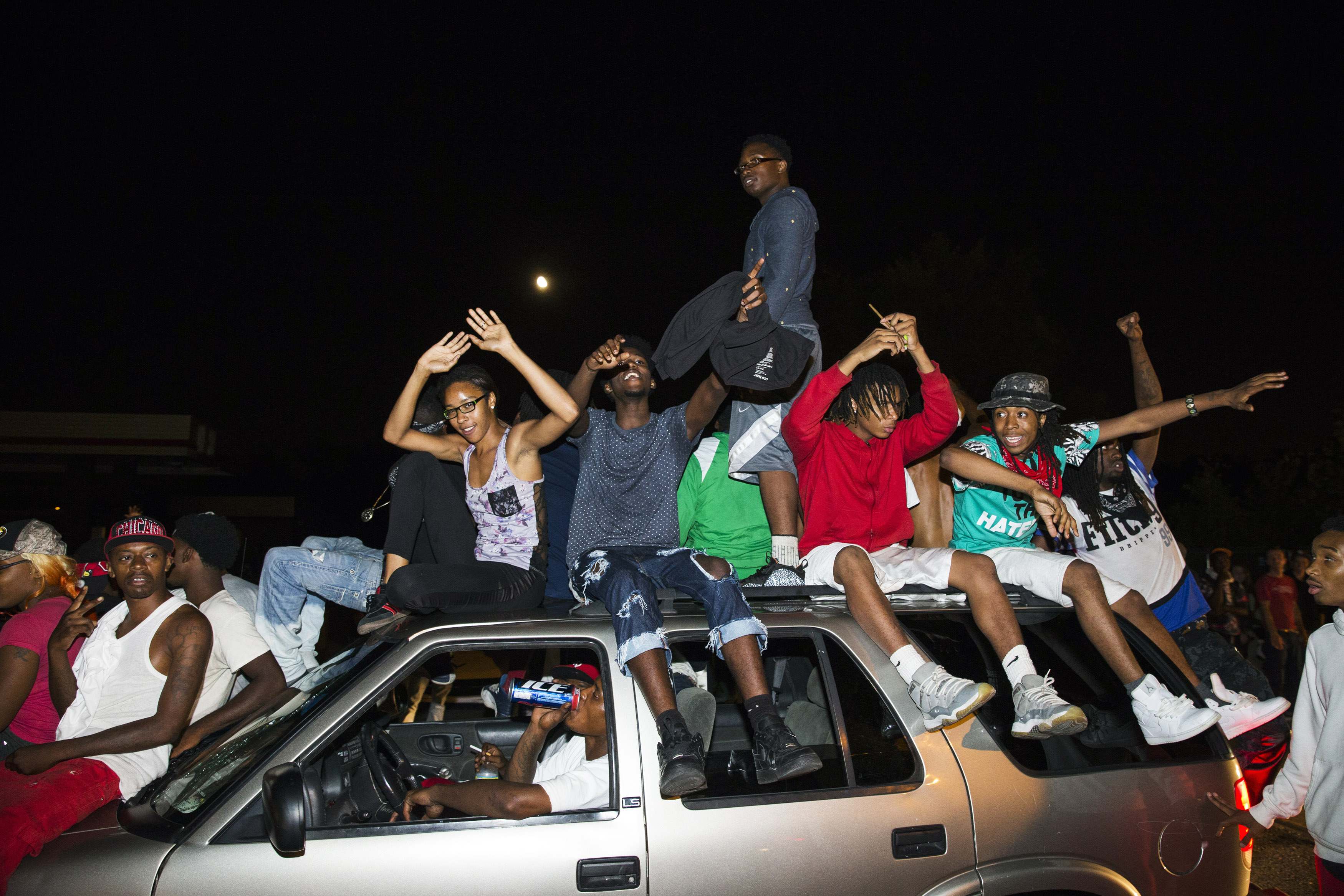 FERGUSON, Mo. -- County police in riot gear and armored tanks gave way to state troopers walking side-by-side with thousands of protesters as the St. Louis suburb where an unarmed black teen was shot by a city police officer overwhelmingly avoided violence Thursday after nearly a week of unrest and mounting public tension.

The dramatic shift came after Missouri Gov. Jay Nixon assigned oversight of the protests to the state Highway Patrol, stripping local police from the St. Louis County Police Department of their authority after four days of clashes with furious crowds protesting the weekend death of 18-year-old Michael Brown.

"All they did was look at us and shoot tear gas," said Pedro Smith, 41, who has participated in the nightly protests. "This is totally different. Now we're being treated with respect."

Ferguson Police Chief Tom Jackson confirmed to CBS News that the name of the officer who shot Brown will be made public Friday morning. The city and county have come under heavy criticism for refusing to release the name, citing threats against that officer and others.

In St. Louis, Brown's mother appeared briefly Thursday night at an anti-brutality gathering near the city's Gateway Arch, urging through a relative for peace to prevail. The observance was among dozens staged nationwide, each with a minute of silence for Brown and others affected by alleged police brutality.

The more tolerant response to protests in Ferguson came as President Obama spoke publicly for the first time about Saturday's fatal shooting - and the subsequent violence that shocked the nation and threatened to tear apart Ferguson, a town of 21,000 that is almost 70 percent black and patrolled by a nearly all-white police force.

Mr. Obama said there was "no excuse" for violence either against the police or by officers against peaceful protesters. He made the remarks in Martha's Vineyard, Massachusetts, where he is on vacation.

Holder's promise came Thursday in a telephone. A law enforcement official tells The AP that Holder spoke to the Brown family while they visited the U.S. attorney's office in Missouri.

The official was not authorized to be identified by name and requested anonymity to discuss Holder's call.

Holder expressed his personal condolences for Brown's death, and told his family that the Justice Department was investigating.

Holder has said federal investigators have interviewed witnesses to the shooting.

Holder emphasized Thursday that the events unfolding in Ferguson "cannot continue," and condemned acts of violence by the public as well as heavy-handedness by law enforcement.

"At a time when we must seek to rebuild trust between law enforcement and the local community, I am deeply concerned that the deployment of military equipment and vehicles sends a conflicting message," Holder said.

Nixon's promise to ease the deep racial tensions was swiftly put to the test as demonstrators gathered again Thursday evening in the neighborhood where looters had smashed and burned businesses on Sunday and where police had repeatedly fired tear gas and smoke bombs.

But the latest protests had a light, almost jubilant atmosphere among the racially mixed crowd, more akin to a parade or block party. The streets were filled with music, free food and even laughter. When darkness fell -- the point at which previous protests had grown tense -- no uniformed officers were in sight outside the burned-out QuikTrip convenience store that had become a flashpoint for standoffs between police and protesters.

"You can feel it. You can see it," demonstrator Cleo Willis said of the change. "Now it's up to us to ride that feeling."

Nixon appointed Highway Patrol Capt. Ron Johnson, who is black, to lead the police effort. Johnson, who grew up near Ferguson and commands a region that includes St. Louis County, marched alongside protesters Thursday, joined by other high-ranking brass from the Highway Patrol as well as the county department. The marchers also had a police escort.

Several people stopped to shake hands and even hug Johnson and other officers, thanking them by name. At one point, Johnson spoke to several young men wearing red bandanas around their necks and faces. After the discussion, one of the men reached out and embraced him.

At the QuikTrip, children drew on the ground with chalk and people left messages about Brown.

Mr. Obama had appealed for "peace and calm" on the streets.

"I know emotions are raw right now in Ferguson, and there are certainly passionate differences about what has happened," the president said. "But let's remember that we're all part of one American family."

Residents in Ferguson have complained about the police response that began soon after Brown's shooting with the use of dogs for crowd control -- a tactic that for some evoked civil-rights protests from a half-century ago. The county police had taken over the investigation of Brown's shooting and security at the request of the smaller city.

Nixon vowed that "Ferguson will not be defined as a community that was torn apart by violence but will be known as a community that pulled together to overcome it." The governor was joined at a news conference by the white mayor of St. Louis and the region's four state representatives and the county executive, all of whom are black.

Like last year's shooting of Trayvon Martin, social media brought international attention to the tragedy. Ferguson spawned a proliferation of hashtags and has been a dominant subject on Twitter, Facebook and other sites. Journalists and protesters offered real-time pictures, videos and updates, and the world responded.

Police have said Brown was shot after an officer encountered him and another man on the street. They say one of the men pushed the officer into his squad car, then physically assaulted him in the vehicle and struggled with the officer over the officer's weapon. At least one shot was fired inside the car. The struggle then spilled onto the street, where Brown was shot multiple times.

Dorian Johnson, who says he was with Brown, has told a much different story. He has said the officer ordered them out of the street, then grabbed his friend's neck and tried to pull him into the car before brandishing his weapon and firing. He says Brown started to run and the officer pursued him, firing multiple times.

A person familiar with the matter, who spoke on condition of anonymity because the investigation is ongoing, told The Associated Press federal authorities have interviewed Johnson.