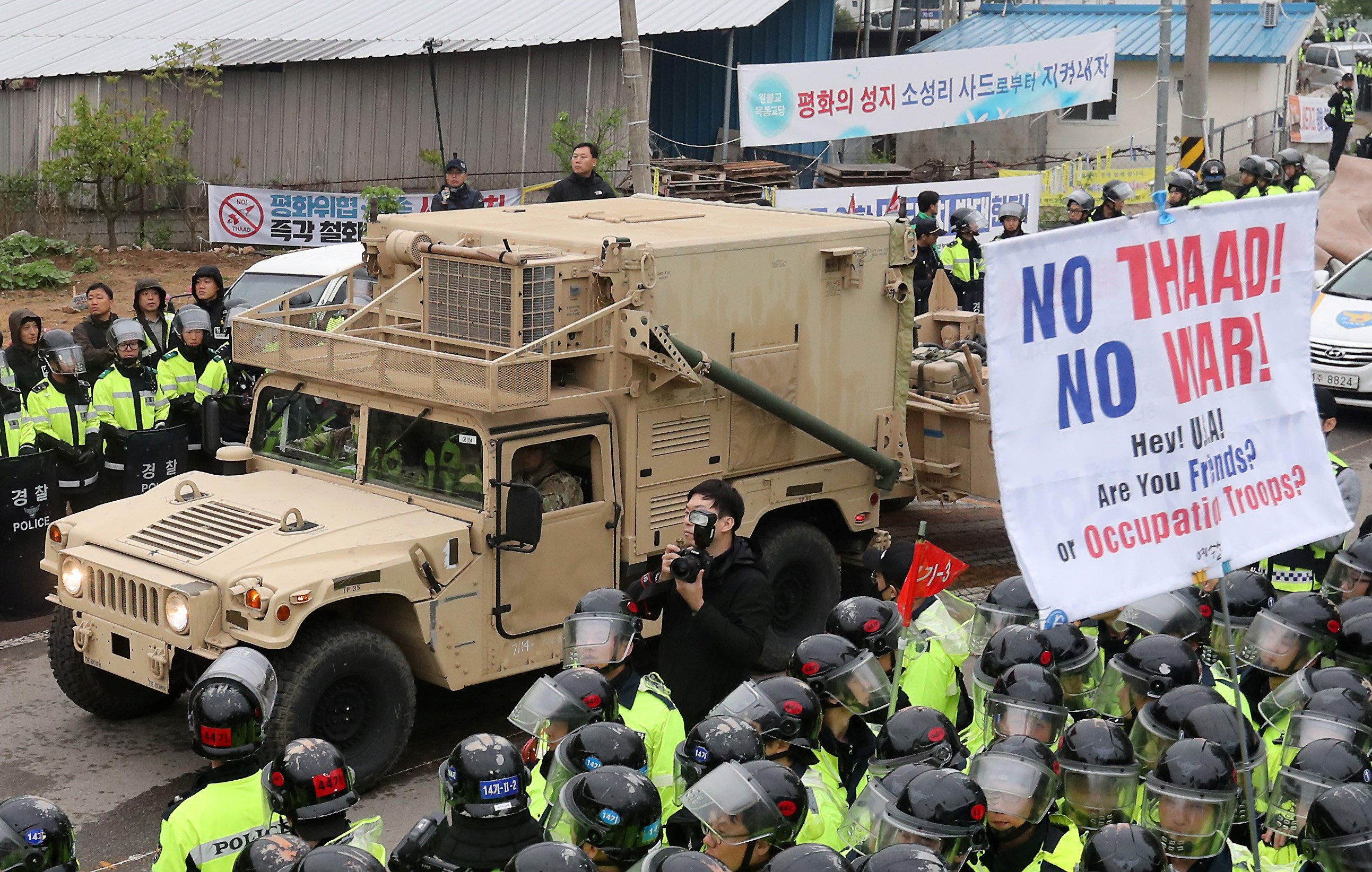 SEOUL, South Korea -- In a defiant bit of timing, South Korea announced Wednesday that key parts of a contentious U.S. missile defense system had been installed. This, a day after rival North Korea showed off its military power.

The South’s trumpeting of progress on setting up the Terminal High-Altitude Area Defense system, or THAAD, comes as high-powered U.S. military assets converge on the Korean Peninsula and as a combative North Korea signals possible nuclear and missile testing.

North Korea conducted live-fire artillery drills on Tuesday, the 85th anniversary of the founding of its million-person strong Korean People’s Army. On the same day, a U.S. guided-missile submarine docked in South Korea. And the USS Carl Vinson aircraft carrier is heading toward the peninsula for a joint exercise with South Korea.

The moves to set up THAAD within this year have angered not only North Korea, but also China, the country the Trump administration hopes to work with to rid the North of nuclear weapons. China, which has grown increasingly frustrated with its ally Pyongyang, and Russia see the system’s powerful radars as a security threat.

South Korea said in a statement Wednesday that unspecified parts of THAAD had been installed. The statement said Seoul and Washington have been pushing to get THAAD up and working quickly, to cope with North Korea’s advancing nuclear and missile threats. According to the Yonhap news agency, the parts include two or three launchers, intercept missiles and a radar.

About 8,000 police officers were mobilized, and the main road leading up to the site in the country’s southeast was blocked earlier Wednesday, Yonhap reported. About 200 residents and protesters rallied against THAAD in front of a local community center, with some hurling plastic water bottles.

More than 10 demonstrators were injured during clashes with police, Kim Jong-kyung, a leader of a group of residents protesting the deployment, told the Reuters news agency. He said protesters rallied overnight and would stay near the location.

On Tuesday, North Korea conducted what it called its largest ever combined live-fire drills, near the east coast port city of Wonsan.

Along with sending U.S. military assets to the region in a show of force, President Trump is leaning on China to exert economic pressure on its wayward ally. Chinese President Xi Jinping, who spoke to Mr. Trump Monday, is urging restraint from both Pyongyang and Washington.

In Washington, top Trump administration officials are due to brief the entire U.S. Senate Wednesday.

A rapid tempo of North Korean weapons testing in the past year has pushed Kim Jong Un’s authoritarian nation closer to developing a nuclear-tipped missile that could reach the U.S. mainland.

The USS Michigan, a nuclear-powered submarine, arrived Tuesday at the South Korean port of Busan for what was described as a routine visit to rest crew and load supplies. The U.S. 7th Fleet said two American destroyers were conducting simultaneous maritime exercises with naval ships from South Korea and Japan.

North Korea routinely accuses the United States of readying for an invasion, and threatens pre-emptive strikes to stop it. An unnamed North Korean Foreign Ministry spokesman said the U.S. administration’s policy to maximize pressure on North Korea was “little short of lighting the fuse of total war,” the state news agency reported Tuesday.

The streets of Pyongyang, however, were quiet for Tuesday’s anniversary, which was overshadowed by April 15 celebrations ofthe birthday of the nation’s late founder Kim Il Sung, and were marked by a missile test the following day.

The Trump administration is also upping the ante diplomatically.

On Friday, Secretary of State Rex Tillerson will chair a special meeting of the U.N. Security Council.