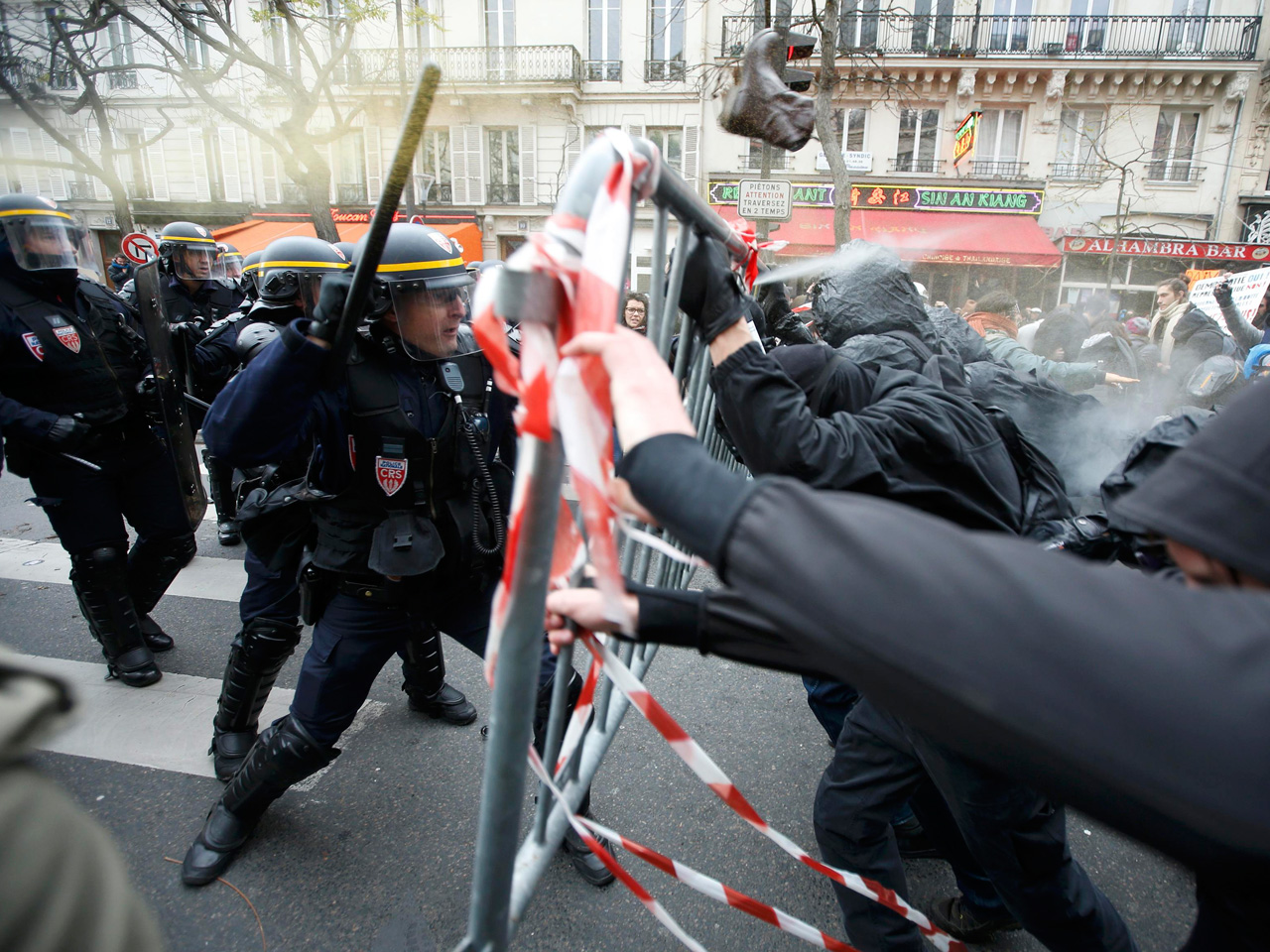 An organizer of the climate change rallies, Avaaz, said that early estimates of marchers around the globe show 570,000 people marched in 175 countries.

Thousands of demonstrators gathered in central Paris Sunday and formed a human chain along the route of a long-planned protest march that was banned by France's Socialist government in a security crackdown following attacks by Islamic extremists earlier this month.

In mid-afternoon scuffles broke out between riot police and protesters on the Place de la Republique, where Parisians have gathered to place flowers in remembrance of the 130 mostly young victims of the Nov. 13 attacks.

Environmental and other activists also lined up shoes on Paris streets and held a healing ceremony to urge world leaders to reach a deal to slow climate change.

Interior Minister Bernard Cazeneuve said 174 people were jailed for possible charges. He said, separately, that 26 people have been placed under house arrest, stressing they weren't militants but people known for violence in the past.

Some protesters chanted "a state of emergency is a police state."

Paris Police Chief Michel Cadot told reporters that police identified about 200 or 300 people who violated a ban on all protests under the country's state of emergency. Cadot said Sunday about 100 people who were found to have projectiles or other suspicious objects were detained. Police fired numerous rounds of tear gas on protesters to disperse them.

While some protesters clashed with police in riot gear in the capital, many sought other ways to get their message of needing more urgent action across. French media report several thousand have begun forming a human chain in the city.

They are urging leaders gathering for U.N. climate talks near Paris from Nov. 30 to Dec. 11 to agree to deep emissions cuts and to help poor countries cope with global warming.

A big activists' march Sunday was banned because of a state of emergency imposed in France after the Nov. 13 extremist attacks in Paris that killed 130 people.

Instead, environmental groups are holding marches outside France this weekend, and some activists lined up shoes on the Place de la Republique square to represent the people barred from protesting.

Tribal leaders from different indigenous groups around the world are also planning a healing ceremony Sunday near the site of the Paris attacks.

The Commonwealth -- a grouping of Britain and many of its former colonies - covers more than 2 billion people. Its members include industrialized economies such as Canada and Australia, resource-hungry India and small island states vulnerable to rising sea levels.

At a biennial summit in Malta, Commonwealth leaders called for developed countries to spend $100 billion a year by 2020 to "help developing countries implement plans for adaptation and mitigation."

The United States has cast doubt on whether an agreement reached in Paris would be legally binding. Secretary of State John Kerry said this month that there were "not going to be legally binding reduction targets" agreed at the meeting.

U.N. Secretary-General Ban Ki-moon is meeting French President Francois Hollande on Sunday morning to discuss the talks, and U.S. President Barack Obama is among scores of other leaders arriving for the talks.

Negotiators from 196 countries are seeking an accord that reduces man-made emissions to limit rising sea levels and increasingly extreme weather that is already threatening populations around the world.