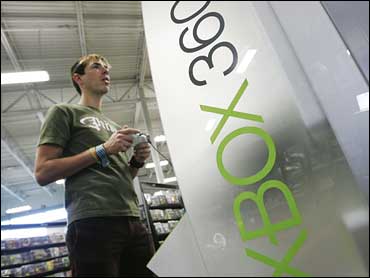 In terms of graphics, Xbox 360 is superior to Wii, but PS3 will probably be the champion in this department. Still, Xbox 360 is no slouch. Take one look at "Gears of War" and you'll see the future of HD gaming.
Xbox 360 was the first next-generation console to be released, so it has a year's worth of games and accessories already on hand.
The Premium version of Xbox 360 sells for $399 which is $200 less than the PS3's top shelf offering.

Microsoft has released an HD-DVD drive for Xbox 360 for $199.99. So, if you want to watch your favorite movies in stunning HD, here's a good option, especially if you already have the console.
Xbox Live offers online multiplayer gaming in a nearly hassle-free manner. After the signup process, all you have to do is pop in your favorite game, connect to the service, and you're set. The service also provides a wide variety of free downloads, ranging from music videos to movie trailers to demos of upcoming games.

Starting Nov. 22, Xbox Live Marketplace will sell movies and TV shows in both standard and high definition. In other words, this is one of Microsoft's answers to iTunes. The price of these movies and shows has not been set in stone and there are still questions over how the 20 GB hard drive will be able to store memory-hogging HD content.

If you are a fan of first- and third-person shooters, Xbox 360 offers a ton of great options. "Call of Duty 3," "F.E.A.R.," "Tom Clancy's Ghost Recon Advanced Warfighter," and "Prey" are all worth a look. But the cream of the crop is "Gears of War." It may not have the greatest story, but the online mode is addictive, the graphics are amazing, and the gameplay is innovative.

Call this a hunch, but if you are also planning on buying the Zune music player, expect the two Microsoft products to complement each other sometime in the future. Perhaps when Xbox Live Marketplace starts offering movies and TV shows, you'll be able to download them onto your Zune.

For those who love to rock, "Guitar Hero II" will be released sometime in early 2007. What's even better is that there is a strong likelihood that more songs will be available for purchase on Xbox Live Marketplace. So get your "Bring Extreme's 'Play With Me' To 'Guitar Hero II' " petitions ready.

One of the major criticisms of Xbox 360 is that it is geared mainly towards hardcore gamers. Casual gamers are hesitant to spend hundreds of dollars on an expensive toy they will not use regularly. The Wii will most likely fill this void due to its price and its simple, yet highly enjoyable games.

While Xbox 360 is certainly a powerful gaming system, PS3 approaches supercomputer-like performance with its Cell chip. In the long term, the PS3 will probably have more advanced games, in terms of graphics.
If you think PS3 is too expensive, Xbox 360 can be just as pricey if you decide to buy the HD-DVD drive as well.

Microsoft and game developers have started a trend where gamers can buy extra features for their games via Xbox Live Marketplace. For instance, you can purchase new quests and items for "The Elder Scrolls IV: Oblivion." Some gamers worry that developers will purposely remove certain elements of their games - that should be included in the release - with the idea that they can pull some extra cash by selling them on Xbox Live Marketplace.

This may be a wild guess, but expect Microsoft to put forward a higher capacity hard drive when it starts offering HD movies and TV shows on Xbox Live. So if you bought an Xbox 360 when it first came out, then recently purchased the HD-DVD drive add-on, you might have to make another purchase in order to take advantage of this service.

The console is quite loud when it is turned on, so if you're watching a DVD, you might hear a whirling sound throughout the film. The easy solution may just be to pump up the volume.

The power supply is almost the size of a brick, so while the console may look sleek and stylish, you will need to find a nice hiding place for its ugly appendage. Furthermore, the "brick" shouldn't be stuffed into a tight space or else it could overheat.