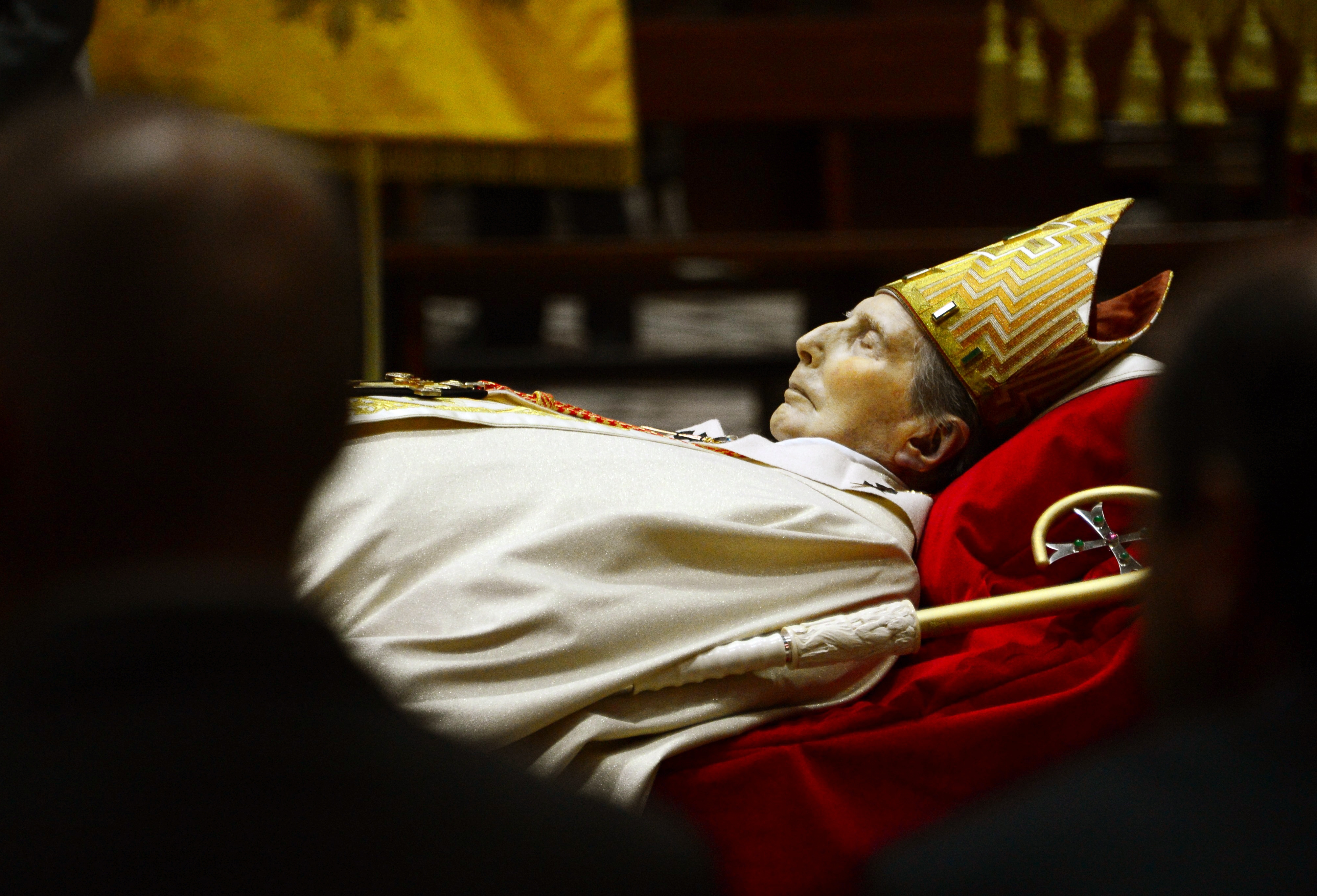 This story was written by CBS News producer Costanza Barone

(CBS News) ROME - Cardinal Carlo Maria Martini, a pastor who dedicated his life to the Roman Catholic Church and was cherished by progressive Catholics for his moderate views, was to be buried Monday near Milan. For many Catholics, the hope of a modernized Church died with him on Friday.

More than 200,000 residents of Milan came to pay their respects to the 85-year-old Cardinal, who served as their Archbishop for 22 years, as his body lay in state over the weekend.

"For me, he was the Pope," said one mourner on the steps of the cathedral where his body lay. "He never became one (Pope) because he was too inconvenient and too modern."

Cardinal Martini was the voice of "another Church," the face of the liberal wing of Catholicism. He continued to challenge the staid conservatism of his peers even as his body lay in state, declaring in a posthumous interview printed the day after his death that the Catholic Church was "200 years behind the times."

Massimo Cacciari, an international lay theologist and philosopher, paid tribute to Martini as "the most impressive man of the Catholic Church in the last ten years."

Even the manner of his death provoked controversy among Catholics. After suffering for 17 years with Parkinson's disease, Martini refused further treatment in his last days. The decision reignited the debate between supporters and opponents of euthanasia.

Martini once said ending one's own life for medical reasons, to end suffering, was "a private decision."

Many of his positions on social issues were frowned upon by the Vatican. He was open-minded towards homosexuality, believed that divorced Catholics should be allowed to receive full sacraments, and said he understood - even if he did not support - abortion.

During the 1990s, Martini was considered a possible candidate for the papacy. But when John Paul II died, Cardinal Martini's hand was seen shaking in a close-up shot on Italian television. It was said at the time that Church officials wanted a new pontiff in good health, after so many years of headlines about John Paul's illness.

Martini and the man who did become Pope Benedict XVI are almost diametric opposites of one another. Benedict is a conservative, a staunch believer in Catholic tradition. But both men immersed themselves in their search for truth and their study of the Bible, and this united them.

It was not clear whether Benedict would attend Martini's funeral on Monday. As such a high-ranking (if controversial) member of the Catholic Church, it would surprise many if he did not. But Martini's parting words, given in the interview for the Italian daily Corriere della Sera on August 8, were an almost unprecedented attack on what he believed was the Church's - and Benedict's - failure to keep up with modern society.

"The church is 200 years behind the times," Martini told his interviewers. "Why does she not shake herself? Why are we afraid?" he asked of those opposed to reform.

"The Church is tired," particularly in the well-developed Western world, he argued. "Our culture has aged, our Churches are huge, our religious houses are empty and the bureaucratic machinery grows, our rites and our vestments are pompous.

"People surrounding me make me feel love," concludes the Cardinal on a more positive note. "This love is stronger than the sentiment of mistrust which I sometimes perceive towards the Church in Europe."