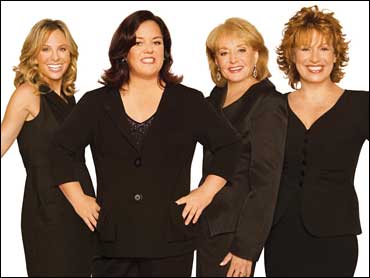 The Daytime Emmys, honoring everything from soaps to talk shows to game shows, will be handed out at Hollywood's Kodak Theatre on Friday.

The quartet could be reunited onstage if "The View" wins in the talk-show host category and O'Donnell attends, as Ricky Kirshner, co-executive producer of the Daytime Emmys, anticipates.

On May 21, before the blow-out with Hasselbeck that preceded her early departure from "The View," O'Donnell announced that she wouldn't be attending the Emmy Awards with her cohosts.

"I'm not going to be able to go to the Emmy awards with you ladies because we have a big school thing that weekend and the graduation from his grade is a big to-do," O'Donnell said.

One group of people who will definitely be attending are about 300 fans who will literally be part of the show. They will be seated on stage in a red-carpet bleacher section, similar to last year's outdoor fan zone. They can cheer, scream and snap photos throughout the show.

Lead actor nominee Peter Bergman of CBS' "The Young and the Restless" isn't so sure about the close-up access.

"Just presenting, you could be accosted. Lucky me," he said, tongue-nearly-in-cheek. "It ends up being almost silliness. It's not how I want to celebrate a career achievement."

And if being on stage wasn't enough, soap fans also were invited to comment on their favorite stars and shows via a special Web site, with some of the remarks to be inserted into the show's nominee introductions.

This year's ceremony also will be scaled back to two hours and won't have any musical numbers or hosts when it airs on CBS (9 p.m. EDT) — all changes aimed at boosting the ratings from last year's dismal showing.

"You need to make it move fast," Kirshner said. "Every show is represented. There's no lack of star power."

The show's lead-in will be a rerun — a repeat of Bob Barker's final episode as host of "The Price is Right" after first airing in its usual daytime slot earlier Friday.

"I hope the Barker lead-in helps because he's been getting huge numbers with his shows," Kirshner said. "We do the best show we possibly can for the people that watch."

Last year's three-hour Daytime Emmys show, aired by ABC in late April, attracted 6.1 million people, and ranked 70th in the Nielsen ratings. That was down 1.5 million from 2005 and less than half what the audience was in 2000.

"Maybe they're in love with the characters more than the actors," said Bergman, a former lead-actor winner for his work on "The Young and the Restless," daytime's top-rated soap.

"Maybe because it's at night," said Michelle Stafford, Bergman's co-star and lead actress nominee. "When I watched daytime TV when I was younger, I was interested in seeing people (at night) all pretty and dressed up. I still am. Now I'm one of them."

Stafford will be vying for the golden trophy with co-star Jeanne Cooper, Maura West of "As the World Turns," Crystal Chappell of "Guiding Light," and last year's winner, Kim Zimmer of "Guiding Light."

Barker is nominated for his 18th and 19th Emmys. He's up against Trebek of "Jeopardy," last year's winner, as game-show host

"You hear people say that it's fun to be nominated," Trebek said. "It's more fun to win."

"The Price is Right" is nominated in the game show category, and Barker is its executive producer.

"I'm going with the hope that the judges will have sympathy for an old man who's out of work," joked Barker, who retired last week at 83 after 35 years of giving away vacations and cars.

Barker's 50-year television career will be honored during the show, along with Lifetime Achievement winner Lee Phillip Bell, who co-created "The Young and the Restless" and "The Bold and the Beautiful" with late husband William J. Bell.

A new category was added this year to include morning news and entertainment programs. ABC's "Good Morning America" and NBC's "Today" will compete against the syndicated "Live with Regis and Kelly," a perennial talk-show nominee that couldn't enter both categories.