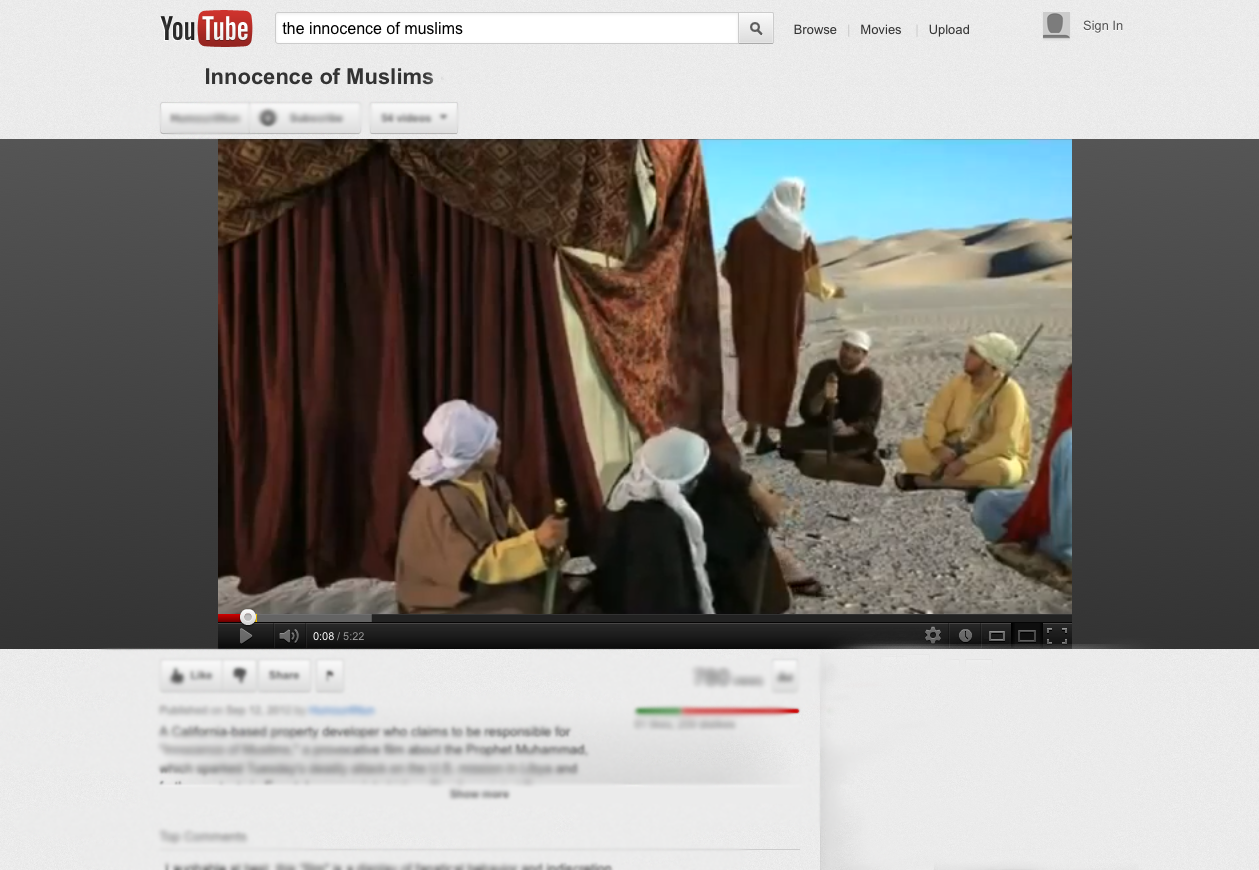 (CBS/AP) WASHINGTON - Federal probation officials are investigating the activities of a southern California filmmaker convicted of financial crimes who has been linked to an anti-Islamic movie inflaming protests across the Middle East, a spokesman for the U.S. federal court system said Friday.

The probation department in California's central district is reviewing the case of Nakoula Basseley Nakoula, 55, who was previously convicted on bank fraud charges and was banned from using computers or the Internet as part of his sentence. The review is aimed at learning whether Nakoula violated the terms of his five-year probation.

Karen Redmond, a spokeswoman for the administrative office of the U.S. courts, confirmed Friday the review is under way. If the probation department determines Nakoula violated terms of his release, a judge could send him back to prison.

Federal authorities have identified Nakoula, a self-described Coptic Christian, as the key figure behind "Innocence of Muslims," a film denigrating Islam and the Prophet Muhammad that ignited mob violence against U.S. embassies across the Middle East. A federal law enforcement official told the Associated Press on Thursday that authorities had connected Nakoula to a man using the pseudonym of Sam Bacile who claimed earlier to be writer and director of the film.

Violent protests set off by the film in Libya played a role in mob attacks in Benghazi that killed U.S. Ambassador Chris Stevens and three other American officials. U.S. Embassy gates in Cairo were breached by protesters and demonstrations against American missions spread to Yemen on Thursday and on Friday to several other countries.

Nakoula pleaded no contest in 2010 to federal bank fraud charges in California and was ordered to pay more than $790,000 in restitution. He was also sentenced to 21 months in federal prison and was ordered not to use computers or the Internet for five years without approval from his probation officer.

It could be difficult to establish a probation violation case against Nakoula. In the federal court system, the conditions of supervised release are geared toward the offense for which a defendant was found guilty and imprisoned.

In Nakoula's case, the offense was bank fraud. His no contest plea was to charges of setting up fraudulent bank accounts using stolen identities and Social Security numbers, depositing checks from those accounts into other phony accounts and then withdrawing the illicit funds from ATM machines.

While it was unclear what might have provoked authorities' interest, the filmmaker's use of a false identity and his access to the Internet through computers could be at issue, according to experts in cyber law and the federal probation system. Nakoula, who told The Associated Press that he was logistics manager for the film, was under requirements to provide authorities with records of all his bank and business accounts.

The probation order authorized in June 2010 warned Nakoula against using false identities. Nakoula was told not to "use, for any purpose or in any manner, any name other than his/her true legal name or names without the prior written approval of the Probation Officer."

Federal prosecutors had charged that Nakoula used multiple false identities in creating his fraudulent accounts. Several, Nicola Bacily and Erwin Salameh, were similar to the Sam Bacile pseudonym used to set up the YouTube account for the anti-Islamic film. Other pseudonyms used in the accounts ranged from Ahmed Hamdy to P.J. Tobacco.

Nakoula was also told he could not have any access to the Internet "without the prior approval of the probation officer." Nakoula was ordered to detail any online devices and cellphones to authorities and was told his devices would be monitored and subject to searches.

Jennifer Granick, a criminal defense lawyer who specializes in online crimes, said authorities might not have been aware of Nakoula's online activity even if monitoring devices were placed on his computers. "That may be very hard for a probation officer to catch ahead of time."

Granick also noted that Nakoula's conviction for financial crimes might provide a basis for probation officials to review bank and other monetary records. "Somebody charged with a financial crime might receive some supervision categories where they might re-offend," she said.

Nakoula was arrested in June 2009, pleaded no contest to the bank fraud charges a year later and was released from federal prison in June 2011 after serving a 21-month prison term, according to federal records.

An initial report about the federal probation review appeared in The Wall Street Journal.

There are indications that "Innocence of Muslims" may have already been under way as a film project when Nakoula was arrested. A casting call for actors and crew for a film called "Desert Warrior" ran in Backstage magazine, based in Los Angeles and New York, in May and June 2009. The casting call described the film project as a "historical Arabian Desert adventure" and listed a "Sam Bassiel" as producer.

One notice identified "Pharaoh Voice Inc."as the film's production company. California state records show Pharaoh Voice was incorporated in September 2007 by a "Youssef M. Basseley." The principal address for Pharaoh Voice in Hawaiian Gardens, a southern California community, is the same location where Nakoula lived until 2008, according to state records.

Sources originally identified Nakoula by a pen name, Sam Bacile, and said he was Jewish and Israeli. A consultant on the film, Steve Klein, told CBS News' Bill Whitaker earlier this week that the film's backers are Christians, Jews and Muslims who moved to the West.

YouTube blocked the video in Libya and Egypt but kept it available everywhere else due to the "difficult situation" in those countries.

Nakoula is reportedly in hiding and his whereabouts are unknown to the public. During an interview with AP, Nakoula denied that he was Sam Bacile, but acknowledged knowing him.