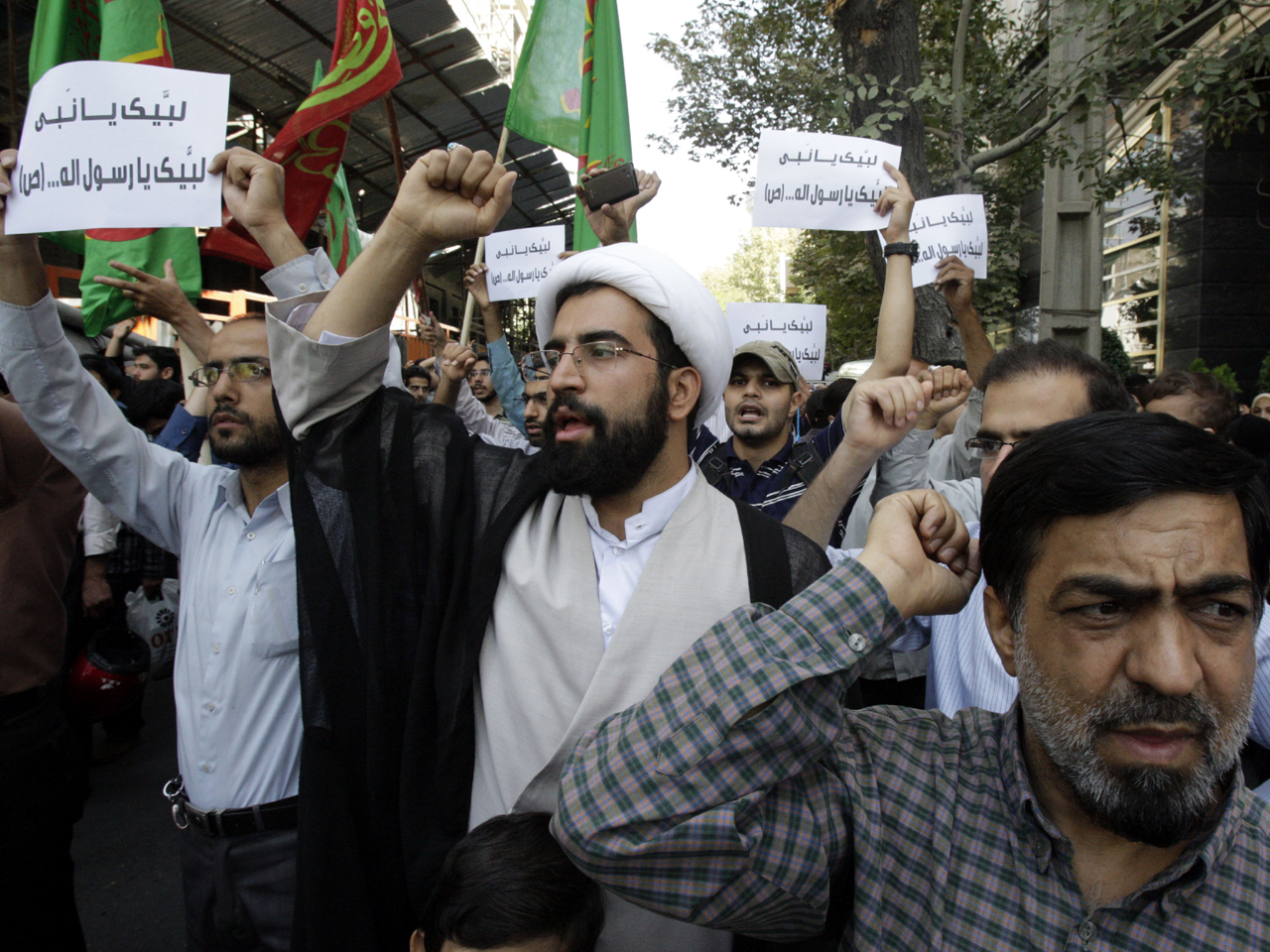 (CBS/AP) WASHINGTON - Federal authorities have identified a southern California man once convicted of financial crimes as the key figure behind the anti-Muslim film that ignited mob violence against U.S. embassies across the Mideast, a U.S. law enforcement official said Thursday.

Attorney General Eric Holder said that Justice Department officials had opened a criminal investigation into the deaths of the U.S. ambassador to Libya and three other diplomats killed during an attack on the American mission in Benghazi. It was not immediately clear whether authorities were focusing on the California filmmaker as part of that probe.

A federal law enforcement official said Thursday that Nakoula Basseley Nakoula, 55, was the man behind "Innocence of Muslims," a film denigrating Islam and the Prophet Muhammad that sparked protests earlier in the week in Egypt and Libya and now in Yemen. U.S. authorities are investigating whether the deaths of U.S. Ambassador Chris Stevens and three other Americans in Libya came during a terrorist attack.

The official, who spoke on condition of anonymity because he was not authorized to discuss an ongoing investigation, said Nakoula was connected to the persona of Sam Bacile, a figure who initially claimed to be the writer and director of the film. But Bacile quickly turned out to a false identity.

A Christian activist involved in the film project, Steve Klein, told CBS News that Bacile was a pseudonym, and he told The Associated Press that Bacile was Christian. Klein had told the AP on Tuesday that the filmmaker was an Israeli Jew who was concerned for family members who live in Egypt.

Klein said he didn't know the real name of the man he called "Sam," who came to him for advice on First Amendment issues.

Klein said the film's financial backers are an anonymous group of Christians, Jews and Muslims with ties to the Middle East, CBS News correspondent Bill Whitaker reports. The film itself is amateurish, shot outside Los Angeles on a very low budget. Several actors told CBS News they only saw their scenes. They were horrified and frightened by the end result.

"I pray now for the family that lost, you know, that lost their loved ones, and I'm praying for the madness to stop," said Cindy, and actor who spoke to CBS News on the condition that only her first name be used.

In Washington, Secretary of State Hillary Rodham Clinton said the film is "disgusting and reprehensible." She called it a cynical attempt to offend people for their religious beliefs but said the U.S. would never stop Americans from expressing their views, no matter how distasteful.

Still, she said the film is no justification for violence or attacks on U.S. diplomatic facilities and personnel.

In California, the AP traced a cellphone number used by Bacile to a southern California house where Nakoula was found.

Bacile initially claimed a Jewish and Israeli background. But others involved in the film said his statements were contrived as evidence mounted that the film's key player was a southern Californian Coptic Christian with a checkered past.

Nakoula told The Associated Press in an interview outside Los Angeles Wednesday that he managed logistics for the company that produced "Innocence of Muslims," which mocked Muslims and the prophet Muhammad.

Nakoula denied that he was Bacile and insisted he did not direct the film, though he said he knew Bacile. But federal court papers filed against Nakoula in a 2010 criminal prosecution said that he had used numerous aliases in the past. Among the fake names, the documents said, were Nicola Bacily, Robert Bacily and Erwin Salameh, all similar to the Sam Bacile persona. Other aliases described in the documents included Ahmad Hamdy, Kritbag Difrat and PJ Tobacco.

During a conversation outside his home, Nakoula offered his driver's license to show his identity but kept his thumb over his middle name, Basseley. Records checks by the AP subsequently found that middle name as well as other connections to the Bacile persona.

The AP located Bacile after obtaining his cellphone number from Morris Sadek, a conservative Coptic Christian in the U.S. who had promoted the anti-Muslim film in recent days on his website. Egypt's Christian Coptic populace has long decried what they describe as a history of discrimination and occasional violence from the country's Arab majority.

Pastor Terry Jones, of Gainesville, Fla., who sparked outrage in the Arab world when he burned Qurans on the ninth anniversary of 9/11, said he spoke with the movie's director on the phone Wednesday and prayed for him. Jones said he has not met the filmmaker in person but added that the man contacted him a few weeks ago about promoting the movie. Jones and others who have dealt with the filmmaker said Wednesday that Bacile was hiding his real identity.

"I have not met him. Sam Bacile, that is not his real name," Jones said. "I just talked to him on the phone. He is definitely in hiding and does not reveal his identity. He was quite honestly fairly shook up concerning the events and what is happening. A lot of people are not supporting him. He was generally a little shook up concerning this situation."

The YouTube account under the username "Sam Bacile," which was used to publish excerpts of the provocative movie in July, was used to post comments online as recently as Tuesday, including this defense of the film written in Arabic: "It is a 100 percent American movie, you cows."

Nakoula, who talked guardedly about his role, pleaded no contest in 2010 to federal bank fraud charges in California and was ordered to pay more than $790,000 in restitution. He was also sentenced to 21 months in federal prison and ordered not to use computers or the Internet for five years without approval from his probation officer.

Assistant U.S. Attorney Jennifer Leigh Williams said Nakoula set up fraudulent bank accounts using stolen identities and Social Security numbers; then, checks from those accounts would be deposited into other bogus accounts from which Nakoula would withdraw money at ATM machines.

It was "basically a check-kiting scheme," the prosecutor told the AP. "You try to get the money out of the bank before the bank realizes they are drawn from a fraudulent account. There basically is no money."

American actors and actresses who appeared in "Innocence of Muslims" issued a joint statement Wednesday saying they were misled about the project and alleged that some of their dialogue was crudely dubbed during post-production.

In the English-language version of the trailer, direct references to Muhammad appear to be the result of post-production changes to the movie. Either actors aren't seen when the name "Muhammad" is spoken in the overdubbed sound, or they appear to be mouthing something else as the name of the prophet is spoken.

"The entire cast and crew are extremely upset and feel taken advantage of by the producer," said the statement, obtained by the Los Angeles Times. "We are 100 percent not behind this film and were grossly misled about its intent and purpose. We are shocked by the drastic rewrites of the script and lies that were told to all involved. We are deeply saddened by the tragedies that have occurred."

Cindy, the actor who spoke to CBS News, told KERO-TV in Bakersfield that the film was originally titled "Desert Warriors" and that the script did not contain offensive references to Islam.

She wants her name cleared.

"When I found out this movie had caused all this havoc, I called Sam and asked him why, what happened, why did he do this? I said, 'Why did you do this to us, to me and to us?' And he said, 'Tell the world that it wasn't you that did it, it was me, the one who wrote the script, because I'm tired of the radical Muslims running around killing everyone,'" she said.

Cindy said the director, who identified himself as Bacile, told her then that he was Egyptian.

The person who identified himself as Bacile and described himself as the film's writer and director told the AP on Tuesday that he had gone into hiding. But doubts rose about the man's identity amid a flurry of false claims about his background and role in the purported film.

Bacile told the AP he was an Israeli-born, 56-year-old Jewish writer and director. Officials in Israel said there was no record of Bacile as an Israeli citizen.

When the AP initially left a message for Bacile, Klein contacted the AP from another number to confirm the interview request was legitimate; then Bacile called back from his own cellphone.

About 15 key players from the Middle East — people from Syria, Iraq, Turkey, Pakistan and Iran, and a couple of Coptic Christians from Egypt — worked on the film, Klein said.

"Most of them won't tell me their real names because they're terrified," Klein said. "He was really scared and now he's so nervous. He's turned off his phone."

An official of the Coptic Orthodox Church in Los Angeles said in a statement Thursday that the church's adherents had no involvement in the "inflammatory movie about the prophet of Islam." An official identified as HG Bishop Serapion, of the Coptic Orthodox of Los Angeles, said that "the producers of this movie should be responsible for their actions. The name of our blessed parishioners should not be associated with the efforts of individuals who have ulterior motives."

The Southern Poverty Law Center, which monitors hate groups, said Klein is a former Marine and longtime religious-right activist who has helped train paramilitary militias at a California church. It described Klein as founder of Courageous Christians United, which conducts protests outside abortion clinics, Mormon temples and mosques.

It quoted Klein as saying he believes that California is riddled with Muslim Brotherhood sleeper cells "who are awaiting the trigger date and will begin randomly killing as many of us as they can."

In his brief interview with the AP, the man identifying himself as Bacile called Islam a cancer and said he intended the film to be a provocative political statement condemning the religion.

But several key facts Bacile provided proved false or questionable. Bacile told the AP he was 56 but identified himself on his YouTube profile as 74. Bacile said he is a real estate developer, but Bacile does not appear in searches of California state licenses, including the Department of Real Estate.

Hollywood and California film industry groups and permit agencies said they had no records of the project under the name "Innocence of Muslims," but a Los Angeles film permit agency later found a record of a movie filmed in Los Angeles last year under the working title "Desert Warriors."

A man who answered a phone listed for the Vine Theater, a faded Hollywood movie house, confirmed that the film had run for a least a day, and possibly longer, several months ago, arranged by a customer known as "Sam."

Google Inc., which owns YouTube, pulled down the video Wednesday in Egypt, citing a legal complaint. It was still accessible in the U.S. and other countries.

Klein told the AP he vowed to help make the movie but warned the filmmaker that "you're going to be the next Theo van Gogh." Van Gogh was a Dutch filmmaker killed by a Muslim extremist in 2004 after making a film that was perceived as insulting to Islam.