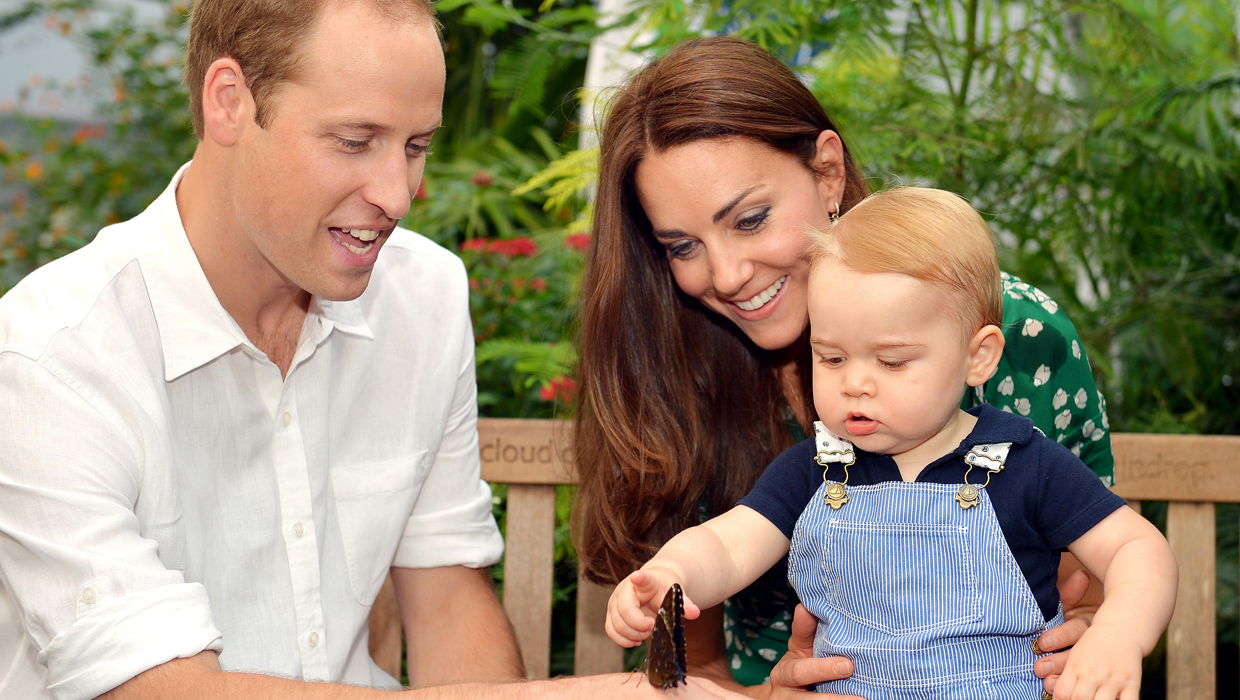 Prince George is now a year old -- and what a whirlwind year it's been.

Marking the milestone, Prince William and Kate said in a statement: "We would like to take this opportunity on George's first birthday to thank everyone over the last year, wherever we have met them, both at home and overseas, for their warm and generous good wishes to George and our family."

Media outlets and royals fans from around the globe counted down to the baby's arrival -- speculation was rampant over the gender, Kate's due date, what they'd name their little one -- and it all culminated when, as per royal tradition, a note announcing the duchess "had been safely delivered of a son" was transported from the hospital to Buckingham Palace and placed on an easel for the world to see (this being the digital age, the notice went up on social media, too).

On July 23, the royal baby (his name would be released the following day) made the first of what will be a lifetime of appearances, nestled in his proud parents' arms as they faced a sea of cameras and reporters before leaving the hospital and settling into life as a family of three (or four, if you count the family dog, Lupo).

George Alexander Louis, as we'd learn he's called, is third in line to the throne, behind his father and grandfather, Prince Charles. He's also the third of Queen Elizabeth II's four great-grandchildren.

Save for two family photos released last summer, the public didn't see little George again until his christening in October at St. James' Palace, which was attended by members of the royal family, the Middletons and the boy's seven godparents. He arrived in his father's arms -- slightly bigger than when cameras captured him as a swaddled newborn -- wearing a replica of an intricate lace and satin christening gown made for Queen Victoria's eldest daughter and first used in 1841.

Like his father before him, George is being introduced to public life early. He traveled with his parents on their royal tour of Australia and New Zealand in April at eight months old, charming locals and royal-watchers alike as he played with other babies in Wellington and wriggled in delight at the sight of a bilby at Sydney's Taronga Zoo. And like his mother, he's proving to be a tiny trendsetter -- outfits he wore on the tour sold out quickly after he was photographed in them.

Milestones have been noted by his proud parents and noticed by the media -- smiles, teething and taking some first steps while clinging to his mother's hand -- and bits about George's personality have emerged as well. William once said his son has "a voice to match any lion's roar" and Kate recently revealed he's interested in "helicopters and anything with wheels." Her sister, Pippa Middleton, called George a "very dear boy" in a recent interview and added, "He's brought a lot of pleasure and fun for all of us."

The royals released new photos of George this week in celebration of his first birthday. Taken at a butterfly exhibit at London's Natural History Museum, they show the little one standing walking unaided and marveling at the butterflies as his proud parents looked on. As far as birthday celebrations go, it's been reported that there will be a family gathering (royals and Middletons alike) for a small party at Kensington Palace.

Leave your birthday wishes for George in the comments below, and check out the gallery above for images from the little prince's first year.