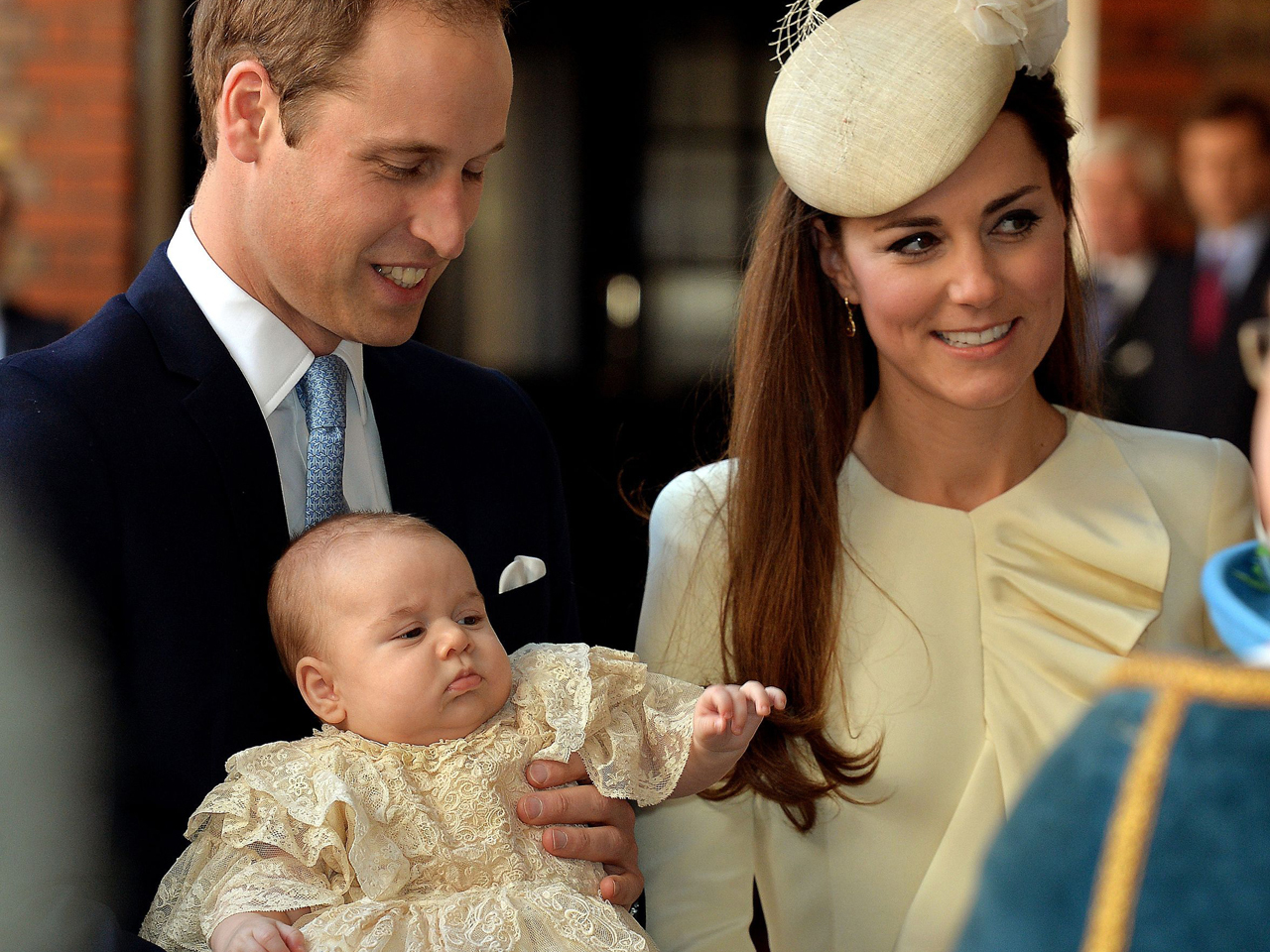 Prince George of Cambridge was christened Wednesday at a rare four-generation gathering of the royal family in London.

George, the son of Prince William and wife Kate, the Duke and Duchess of Cambridge, was christened by Archbishop of Canterbury Justin Welby at the Chapel Royal at St. James' Palace.

The 3-month-old, who was born July 22 and is third in line for the British throne, wore a replica of an intricate lace and satin christening gown made for Queen Victoria's eldest daughter and first used in 1841.

He arrived at the chapel in his father's arms with his mother by their side, and appeared to wave at his great-grandmother, Queen Elizabeth II, although it was really a case of William moving his son's hand up and down. It's the first glimpse the public has gotten of George since two family photos were released in August.

Kate, smiling broadly on her way into the chapel, wore a cream-colored Alexander McQueen dress and matching Jane Taylor hat with her long hair brushed to the side. William wore his customary dark suit and tie as he proudly carried their child.

The two hymns were "Breathe on Me, Breath of God" and "Be Thou My Vision."

Palace officials said water from the River Jordan -- where Christians believe Jesus Christ was baptized -- would be used for the christening. The river's waters have often been used to make the sign of the cross on the heads of royal infants.

Hours earlier, Kensington Palace announced the seven people that Prince William and wife Kate have chosen to be godparents to their son.

They are: Oliver Baker, a friend from St. Andrews University; Emilia Jardine-Paterson, who went to the exclusive Marlborough College with Kate; Hugh Grosvenor, who is the son of the Duke of Westminster; Jamie Lowther-Pinkerton, a former private secretary to the couple; Julia Samuel, described as a close friend of the late Princess Diana; Zara Tindall (nee Phillips, expecting a child of her own), who is William's cousin, and William van Cutsem, a childhood friend of William.

Some royal watchers camped outside the palace for more than 24 hours to obtain a good vantage point for watching the guests arrive, but the ceremony was private.

Charles and Camilla are hosting a private tea following the service at their Clarence House residence. There, guests will be served slices from the top tier of the wedding cake from the Duke and Duchess of Cambridge's 2011 wedding.

The royal couple has hired photographer Jason Bell to take official pictures, which are expected to include a historic multi-generational photograph of the queen with three future monarchs: her son Charles, her grandson William and her great-grandson George.

The official photographs are expected to be released to the public the day after the christening.