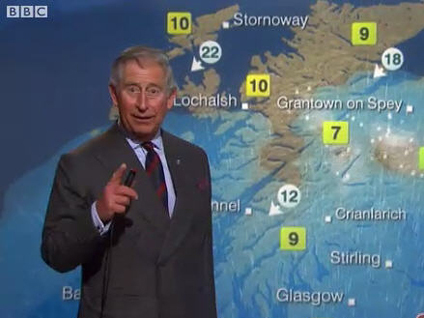 (CBS News) If being King of England doesn't work out, Prince Charles may have another profession already lined up - TV weatherman.

The Prince of Wales had a go at presenting the weather report during a visit to the BBC Scotland's headquarters in Glasgow on Thursday.

Standing in front of the weather map, Charles read a specially-written script that included references to royal residences in Scotland, including Balmoral and Castle of Mey. (Watch the video here.)

According to the Associated Press, the sight of the prince reading the lunchtime news weather spot caused many Britons to do a double-take. His wife, Camilla, Duchess of Cornwall, also tried her hand at reading the weather.

Palace officials told the AP that Charles and Camilla - also known as the Duke and Duchess of Rothesay - were visiting the studios to mark the 60-year anniversary of BBC TV Scotland.