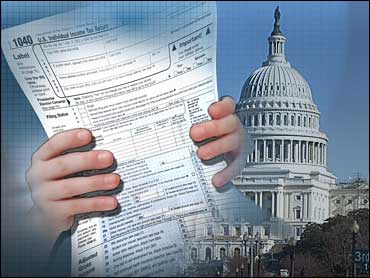 President Bush celebrated a package of tax cuts which, with his promised signature, will send refunds to some parents, increase the size of many paychecks and provide more benefits to investors.

Mr. Bush, spending a long weekend at his ranch, said in his weekly radio address Saturday the cuts "will help boost the nation's economy and create jobs."

"When people have extra take-home pay, there's greater demand for goods and services. And employers will need more workers to meet that demand," the president said.

"This achievement is a victory for every family struggling to pay the bills, every entrepreneur hoping to expand the business and create new jobs and every American looking for work."

The Republican-run Senate approved the bill, 51-50, on Friday with Vice President Dick Cheney's vote breaking the tie. The House had passed it, 231-200, earlier in the day.

Democrats criticized the package as a giveaway to the wealthy and a deficit-ballooning budget buster.

Congress gave final approval Friday to the $330 billion package of rebates and lower rates for families and new breaks for businesses and investors. The White House plans for Mr. Bush to sign it this week with fanfare.

Mr. Bush's enthusiasm contrasted with his earlier criticism of a package that was even larger - the $350 billion version originally approved by the Senate.

In Ohio last month, Mr. Bush campaigned against that bill and insisted only a package of at least $550 billion would "make sure that the economy grows."

"Why are they for a little-bitty tax relief package?" he said of senators who opposed his bid for larger cuts.

The White House also suggested Mr. Bush was doing a bit of nose-holding - preferring larger reductions but acquiescing to what Congress was willing to give him.

"The president continues to think that the best way to help the economy and the right thing to do for taxpayers is to let people keep the money they earn," White House press secretary Ari Fleischer said.

Still, it was clear the measure's passage - the third tax cut of Mr. Bush's presidency - was a victory.

What he won lacked his signature drive to end taxes on corporate dividends, but it included most of the elements he wanted. And though the final amount was less than half what Mr. Bush asked for in January, the total price tag could well end up much bigger down the road.

Provisions that would end the bill's cuts in personal income taxes after 2004 and reductions in dividend and capital gains after 2008 - with levies then reverting to higher levels - are unlikely, politicians of both parties say, because accusations would fly about a tax increase.

Republican leaders are already indicating they want to extend the bill's many temporary tax cuts.

Sen. Olympia Snowe, R-Maine, one of the moderates who forced Congress to halve the president's tax cut plan, said the bill still worried her. "This is a trillion-dollar tax cut masquerading as $350 billion," she said. "This tax cut may grow deficits to levels economists fear will be unsustainable."

Personal tax cuts are retroactive to Jan. 1, so employees will see fatter paychecks during the last half the year, and many parents will get an advance refund worth up to $400 per child later this summer.

Married couples who pay higher taxes than they would if filing as two single taxpayers will see some of that "marriage penalty" disappear, as their standard deduction and tax brackets broaden. Investors will see the tax rates on their earnings drop, as the top rates on dividends and capital gains fall to 15 percent.

The change to income tax rates will last through 2011, but other cuts will be for a much shorter span unless Congress acts to extend them.

The package also included $20 billion in aid for cash-hungry states.

Democrats devoted their weekly response to the president's address to honoring the nation's military during the Memorial Day weekend.

Senate Minority Leader Tom Daschle of South Dakota said although these are unsettling times, the war on terrorism will be won because of the courage and skill of U.S. armed forces - exhibited repeatedly in the nation's history.

Daschle honored those in uniform for their noble sacrifices. Memorial Day is a time to remember the more than 1 million Americans who died in wars since the nation's beginning, he said.

"Those heroes paid for our freedom with their lives," said Daschle, an Air Force veteran.