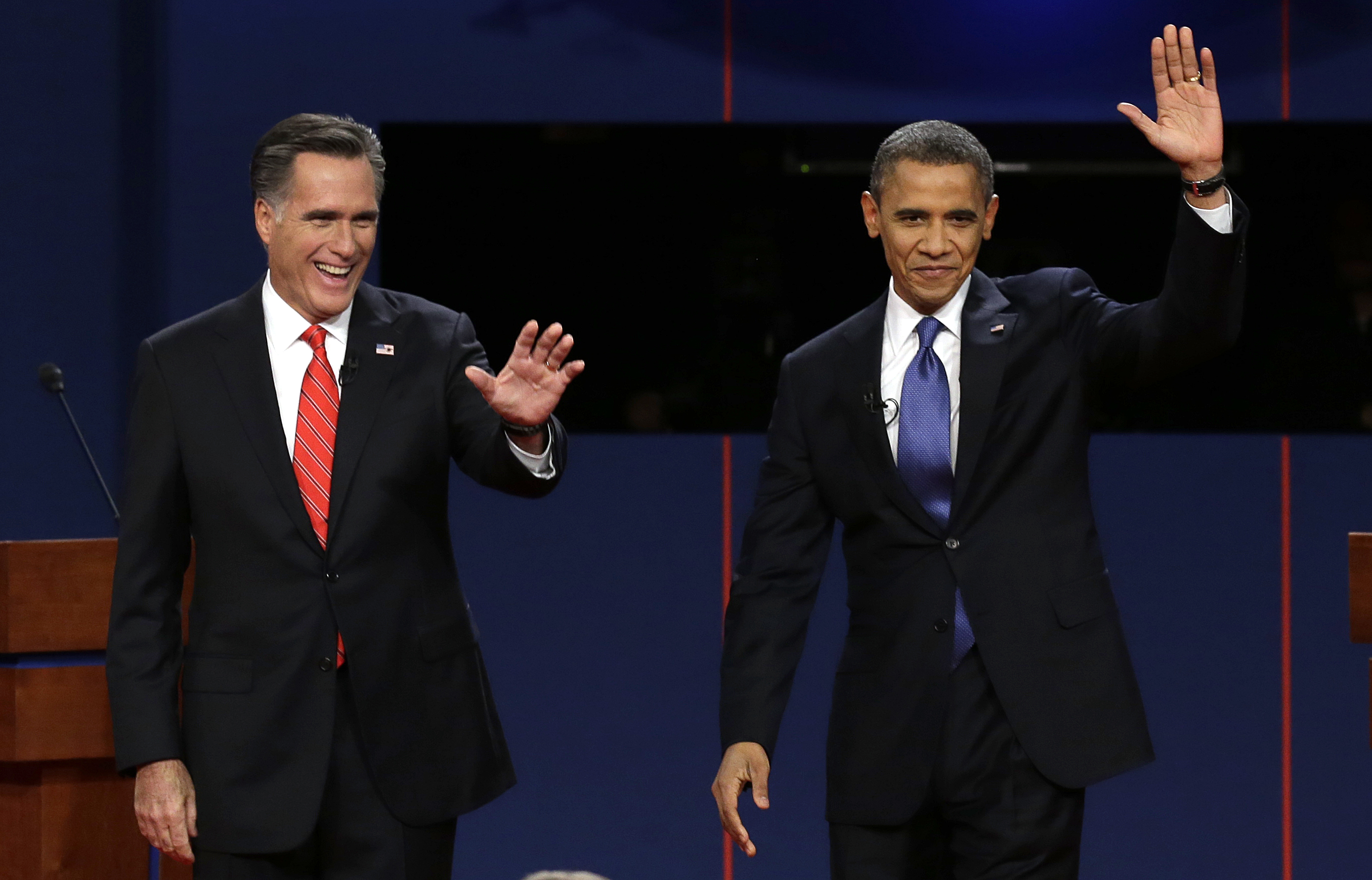 For candidates who want to prepare for every possible question that could be thrown at them, the format for Tuesday night's presidential debate is slightly terrifying: It is a town hall-style debate, which means that the questions come from uncommitted voters. When political reporters are posing the questions, the candidates usually have a good idea what to expect. But when members of the public get the chance to weigh in, the candidates can sometimes face curve balls that leave them flummoxed.

That's precisely what happened in 1992, when George H.W. Bush was the first to respond to a question about how the national debt has affected the candidates personally. The questioner pressed the wealthy president to talk about his own experience, prompting him to respond at one point, "are you suggesting that if somebody has means, that the national debt doesn't affect them? I'm not sure I get it." Mr. Bush later recovered to some extent, but it was an awkward moment.

And it only got worse: When Mr. Bush finished, Bill Clinton approached the woman and asked, "tell me how it's affected you again?" He then said, in part, "in my state, when people lose their jobs, there's a good chance I'll know them by their names." It was one of those moments that gave rise to the notion that Mr. Clinton was particularly good at feeling the pain of the American people. Mr. Bush, meanwhile, was caught by the cameras checking his watch.

The bad news for Tuesday night's debate is that town hall debates are now more tightly controlled than they were in 1992, when moderator Carole Simpson had no idea what would be asked. This year, moderator Candy Crowley will screen the questions beforehand; that reduces the likelihood of a question that catches the candidates completely off guard.

Here's how it will work: Questions during the 90-minute debate, which takes place at 9 p.m. Eastern Time at Hofstra University in Hempstead, N.Y., will be asked by local uncommitted voters from a variety of socio-economic, racial and political backgrounds selected by the Gallup Organization. Roughly 12 audience members out of about 80 will get to ask questions, with Crowley determining which questions will be posed, and in what order.

Those who want to ask a question write identical versions of the question on two cards and give one to Crowley; if they are selected, they then read the question from their card. Questioners who deviate from the question they said they would ask run the risk of having their microphones cut off, though it seems unlikely that such a step would be taken unless the question is clearly out of bounds.

Despite the fact that the questions will be screened, as they have been since the relative free-for-all of 1992, It's not impossible that a left-field question could get asked. In 2000, for example, George W. Bush was asked during a town hall debate about why he "seemed overly joyed and as a matter of fact proud" of the fact that Texas, where Mr. Bush had been governor, led the nation in executions. (Mr. Bush responded that he was not, in fact, proud of that.)

"You get these questions that are very different than what they would get on 'Meet the Press,' and it also makes it very difficult to prepare when you're doing your mock debates," said Northeastern University professor Alan Schroeder, an expert on presidential debates. "Because who would come up with a question like that?"

Town hall debates, which allow the candidates to roam the stage, also elevate the importance of body language. In the 2000 town hall, Al Gore decided to walk uncomfortably close to Mr. Bush when he was answering a question; Mr. Bush looked over at Gore, nodded, and grinned slightly as he finished his answer. The crowd laughed at the situation - and, to some extent, at Gore's apparent ham-fisted attempt to intimidate his rival - while Mr. Bush came across as natural and good natured.

The format brings specific challenges to both President Obama and Mitt Romney. In the wake of the president's flat, widely-panned performance in the first debate, Mr. Obama's campaign has promised the president will bring more passion and energy to the debate stage while taking more shots at his opponent. But the town hall format makes that difficult: It can look unseemly to turn a question from a struggling voter about how to make ends meet into a political broadside.

"It's definitely harder. You have to finesse it a little more," said Schroeder. "If you're going to lay a glove on the opponent it better be a pretty gentle glove. And you have to attack within the context of the question that the person in the audience asked."

For Romney, meanwhile, the town hall format means he must figure out how to better relate to the American people as a human being. Polls show that Mr. Obama is more widely seen as understanding the problems facing average Americans, and the Obama campaign has portrayed the wealthy Republican nominee as an out-of-touch plutocrat with little sense of the challenges the middle class faces. The town hall format, with its direct interaction with voters, gives Romney the chance to reverse - or reinforce - existing perceptions.

Before the 2012 debates, the two campaigns agreed to a "memorandum of understanding" over how this round of debates should be conducted. The Commission on Presidential Debates doesn't sign off on the document, and it is not an official set of campaign guidelines. But the commission is largely controlled by the parties, and it thus tends to follow the rules as laid out in such memoranda.

The 2012 memorandum was not released publicly, but it was obtained and published by Time Magazine. It specifics that the candidates will each get two minutes to respond, followed by additional discussion guided by the moderator - something the Commission has announced publicly. But it also says that "the moderator will not rephrase the question or open a new topic" and goes on to make clear the moderator should remain largely quiet.

Crowley has not publicly agreed to these terms, and in a series of interviews, she has seemed to defy them: She told Politico that her role is not to be a fly on the wall and that, as a journalist, she will take the opportunity to "react organically to what's happening."

In 2008, Tom Brokaw was criticized for inserting himself too aggressively into the town hall debate. But Crowley maintains that a moderator has to keep the candidates in line so that they cannot simply spout talking points. "The nice thing will be, if the town hall person asks about apples, and they answer oranges, I get to say, 'Wait a second, the question was about apples -- let's talk about that," she told CNN last week. She largely stood by the comments in another interview with the network Monday.

The Commission says it has had complains from the campaigns about Crowley's comments.

"Last week while we were in Kentucky, we got a letter from the two campaigns, which in effect said that - I guess Candy had done an interview on some show - and they believed that she was saying she wasn't going to abide by the criteria that the debate commission had indicated would govern this debate. We contacted Candy and told her of their concern and let it go at that," Frank Fahrenkopf, co-chairman of the Commission, told CBS News Monday.

Fahrenkopf said he had not seen the memorandum of understanding but added that it is not Crowley's role to bring up other topics. He said that it is not her job, for example, to note that the State Department disputes what a candidate has said.

"She got out in front of herself," he said of Crowley's comments. Added Fahrenkopf: "It's a tough job being a moderator. You can do a perfect job and somebody's going to bitch and moan about it."

Carole Simpson, who moderated the 1992 town hall, is the only woman other than Crowley to have been selected to moderate a presidential debate. Simpson wrote in an op-ed last month that she was frustrated that Crowley had been assigned the town hall debate as opposed to one of the other debates, because the forum can reduce the moderator to something of a spectator.

"I was simply the figure you see at so many forums -- a character I've come to think of as 'the lady with the microphone' -- albeit one who was an anchor for a major television network," she wrote. Simpson wen on to suggest that the commission rules were designed to make Crowley into "another marginalized woman."

With reporting by Caroline Horn.