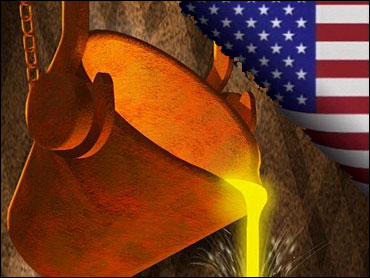 The Trump administration is imposing tariffs on steel and aluminum imports from Europe, Canada and Mexico after a monthlong exemption expires at midnight. Steel imports will be taxed at 25 percent and aluminum at 10 percent under proclamations that President Donald Trump signed in March and reconfirmed Thursday.

That may mean higher prices on everything from SUVs to cans of beer and soda as companies cope with the higher cost of imported materials and the expected retaliatory tariffs on U.S. exports from angry trading partners. The EU has already prepared such tariffs since Mr. Trump's proclamation last month in preparation for Thursday's decision. Mexico and Canada, in the midst of negotiating the North American Free Trade Agreement with the U.S., also are expected to respond swiftly.

U.S. Senator and former Democratic vice presidential candidate Tim Kaine, for one, aimed criticism of the move by tweeting about the cost of beer in aluminum cans: "I don't know about you, but occasionally I like to crack open a cold one on a hot day," Kaine tweeted. "President Trump's aluminum tariffs may raise the price of beer, just as we head into summer -- costing you more at the store, and hurting the U.S. economy."

Here's are some essential things to know following the White House's move today:

And some companies are hiring: U.S. Steel said in March it expected to hire about 500 workers as a result of the tariffs. Its stock was up around 2.5 percent Thursday.

But analysts, economists and even the Aluminum Association said they're concerned the tariffs, in spurring foreign retaliation, would hurt domestic companies more than help. That's because, as the trade taxes drive up the cost of goods that use steel and aluminum from overseas, manufacturers would likely slash jobs to cut costs.

One estimate, from consulting firm Trade Partnership, forecast about 179,000 U.S. jobs lost versus 33,000 created as a result of the metal tariffs.

The EU has retaliatory tariffs ready to go

European Commission President Jean-Claude Juncker in March cited Harley-Davidson (HOG) motorcycles, Levi's jeans and bourbon as possible targets of retaliatory tariffs if the U.S. levies were implemented -- products made in areas that voted for Mr. Trump in the 2016 election.

"Global trade is not a gunfight at the OK Corral," Bruno Le Maire, France's finance minister, quipped after meeting U.S. Secretary of Commerce Wilbur Ross for last-minute talks Thursday. "It's not about who attacks whom, and then wait and see who is still standing at the end."

There are already signs that the metal tariffs, imposed on China among other countries not exempted in March, are starting to hurt. Firms from Caterpillar (CAT) to Harley-Davidson have said that higher commodity prices tied to tariffs are expected to be a drag on results. Harley shares fell more than 2 percent on Thursday.

The effects from tariffs could linger. Cambpell Soup said in a May earnings call that it may see lower margins in fiscal 2019 partly because of the potential impact from the tariffs.

Steel costs for the equipment industry as a whole were up about 15 percent in the quarter ended in March, executives at Caterpillar said on an earnings call in April, according to a transcript. Metal users Boeing (BA) and Ford (F) are also among companies monitoring prices.

Despite such warnings, Ross told CNBC on Thursday he doesn't see a big impact on the U.S. economy. "You obviously have to talk to the EU, but think about how small and in number $3 billion of product is relative to our $18 trillion economy," Ross said in the TV interview. " It's a tiny tiny fraction of 1 percent."

Canada swiftly announced its own tariffs at the same rate -- 25 percent on steel and 10 percent on aluminum. It is also looking at retaliatory tariffs over the next 14 days, for which the government is soliciting input from Canadian citizens.

Prime Minister Justin Trudeau criticized Mr. Trump's rationale for the tariffs, which were imposed under Section 232 of the Trade Expansion Act of 1962. That law gives the president authority to restrict imports and impose unlimited tariffs if a Commerce Department investigation finds a national security threat.

Trudeau said it was "inconceivable" that "Canada could be considered a national security threat to the United States," noting that U.S. fighter planes and tanks have Canadian metal in them.

Chrystia Freeland, the minister of foreign affairs, said retaliation will be $16.6 billion of tariffs. "This is the strongest trade action Canada has taken in the post-war era. It is a proportionate response," she said.

The head of the Canadian Chamber of Commerce on Thursday called on Canada to retaliate against the U.S. move.

"We need to act vigorously to support our domestic industries, and to send a message to the U.S. administration that their unilateral protectionist measures will not come without a serious cost to themselves," Perrin Beatty, the chamber's president and CEO, said in a written statement.

NAFTA talks slipped past a May deadline set by U.S. House Speaker Paul Ryan in order to get legislation approving the deal through Congress. So the Trump administration on Thursday said there wasn't a reason to hold off on imposing the metal tariffs past June 1.

"As to Canada, Mexico, you will recall that the reason for the deferral had been pending the outcome of the NAFTA talks," Ross said on a call with reporters Thursday morning. "There is no longer a very precise date when they may be concluded and therefore they were added into the list of those who will bear tariffs."

The move surprised some analysts.

"Imposing the tariffs on Canada and Mexico amid the ongoing renegotiation of NAFTA is a bigger surprise but underscores administration use of the policy to create leverage," analysts at the Eurasia Group said in a statement. "The timetable for Congressional approval was already a major hurdle to US ratification this year, and this 232 decision may impact the process for concluding a new agreement."

How much of the metals does the U.S. import?

The U.S. is the world's biggest steel importer.  Last year, the top 10 source countries for U.S. steel imports represented 77 percent of the total steel import volume. Canada was the biggest at 17 percent, according to the Department of Commerce's International Trade Administration. China was ranked No. 11.

Yet steel and aluminum make up just more than 2 percent of total U.S. imports, according to Capital Economics.

So potential higher prices in other industries resulting from overseas retaliation may "outweigh any boost to domestic steel and aluminum producers," the analysts said in a note in March.

Why is President Trump doing this?

Mr. Trump earlier this year tweeted that many U.S industries, including steel and aluminum "have been decimated by decades of unfair trade and bad policy with countries from around the world. We must not let our country, companies and workers be taken advantage of any longer. We want free, fair and SMART TRADE!"

He sees the industries as central to U.S. industrial strength, and hopes to restore jobs lost over decades as production shifted outside the U.S. He also is attempting to address what Ross called a glut of steel, mostly coming out of China, that lowers prices worldwide.

"There's overproduction of steel and there's overcapacity throughout the world, and so we have needed to deal with it in a very global manner. You can't just deal with it dealing with one country," Ross told CNBC.

Mr. Trump has zeroed in on trade deficits, including with the nation's largest trading partner, China. Yet trade deficits are created mostly by the U.S. consumer's buying behavior, and reducing the trade gap isn't likely to boost the U.S., economists say.

Ross told CNBC he's heading to China this week to continue trade negotiations. There had been some speculation earlier this week the discussions would be canceled.