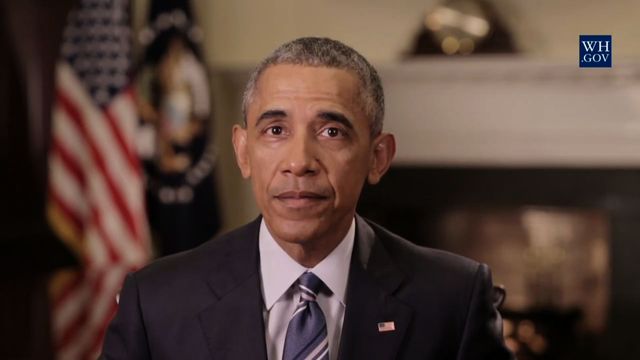 A week away from the Affordable Care Act's enrollment deadline, President Obama is pushing the accomplishments of his landmark health care legislation.

"This is health care in America today: affordable, portable security for you and your loved ones," Mr. Obama said in a video released Saturday. "It's making a difference for millions of Americans every day. And it's only going to get better."

The president ticked off several metrics on America's current health insurance coverage rates, including the nearly 18 million individuals that have gained coverage since the ACA took effect.

"For the first time ever, more than 90 percent of Americans are covered," the president said. "We've done all this while cutting our deficits and keeping health care inflation to its lowest levels in 50 years. And we've begun filling the gaps in employer-based care so that when we change jobs, lose a job, go back to school or start that new business, we can still get coverage."

Mr. Obama singled out small business owner Heather Bragg and her husband, from South Carolina, as a success story.

"Thanks to the Affordable Care Act, her husband Mike had the freedom to switch jobs and join Heather at the small business she'd launched a few years ago," he said. "Through the Health Insurance Marketplace, they found better coverage that actually saved them hundreds of dollars a month."

Individuals can sign up for health insurance through the federal exchange until Jan. 31.

Meanwhile, the GOP is previewing a new energy bill they plan to introduce on the Senate floor next week.

"Following the passage of a highway bill, education reform and many others, the energy bill promises to be our next bipartisan accomplishment on behalf of the American people," Sen. Lisa Murkowski, R-Alaska, said in a video released Saturday. "It will also be the first major energy legislation considered on the Senate floor since 2007."

The main issues tackled by the proposed legislation, according to the Alaska Republican, includes expediting natural gas exports, promoting hydropower and other clean, renewable energy sources and bolstering "mineral security."

Murkowski also blasted Mr. Obama for a "gauntlet of burdensome regulations" when it comes to energy policy, pointing to his rejection of the Keystone XL pipeline and his positions on federal coal leasing.

"Decisions like those cost us jobs. They weaken our growth. And they strengthen some of the world's worst actors, at the expense of hard-working Americans," she said. "There is a better path for our energy policy. And under Republican leadership, Congress is taking it."

The Energy Policy Modernization Act, co-sponsored by Sen. Maria Cantwell, D-Washington, passed out of the Senate committee last year with a bipartisan 18-4 vote.