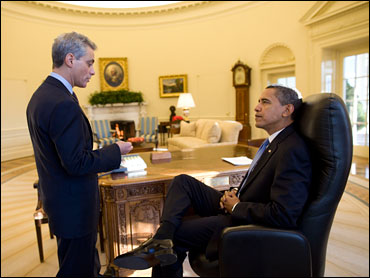 (Pete Souza)
Following yesterday's inaugural festivities, President Obama arrived in the Oval Office at 8:35 AM this morning. He spent 10 minutes alone in the office, according to White House Press Secretary Robert Gibbs.

Mr. Obama read the note left to him by his predecessor, former President Bush. The note was contained in an envelope marked "To: #44, From: #43."

At 10:00, Mr. Obama attended the National Prayer Service, which lasted an hour and a half. 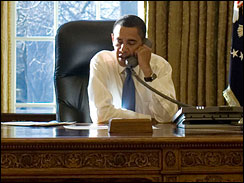 The White House press office says the president "used this opportunity on his first day in office to communicate his commitment to active engagement in pursuit of Arab-Israeli peace from the beginning of his term, and to express his hope for their continued cooperation and leadership."

"In the aftermath of the Gaza conflict, he emphasized his determination to work to help consolidate the ceasefire by establishing an effective anti-smuggling regime to prevent Hamas from rearming, and facilitating in partnership with the Palestinian Authority a major reconstruction effort for Palestinians in Gaza," Gibbs said. "He pledged that the United States would do its part to make these efforts successful, working closely with the international community and these partners as they fulfill their responsibilities as well. The President appreciated the spirit of partnership and warm nature of these calls." 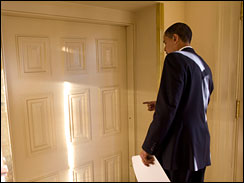 (Pete Souza)
At 1:15, President Obama will attend a swearing-in ceremony for White House staff. He then plans to sign executive orders on Executive Branch ethics and attend the White House open house.