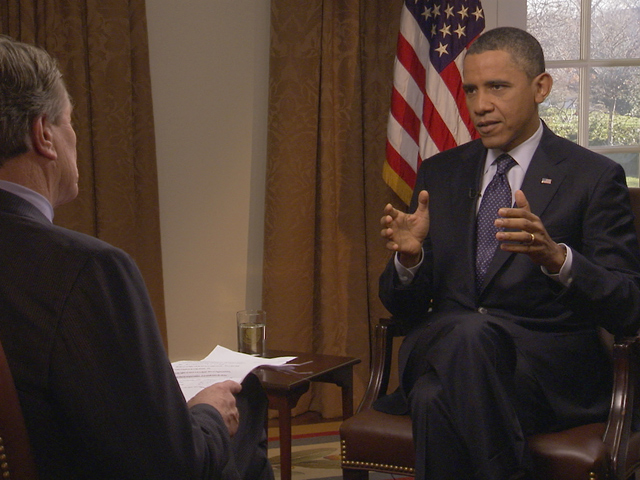 This Sunday on 60 Minutes, President Barack Obama tells Steve Kroft that he's like the captain of a ship on rough seas. At some point in this voyage, the president tells Steve, "Folks are gonna say . . . 'a good captain would have had us in some smooth waters and sunny skies, at this point.' [But] I don't control the weather. What I can control are the policies we're putting in place to make a difference in people's lives."

Those policies - the successes, the failures, and policies the president wants to move forward in the future - are at the heart of Steve's interview with Mr. Obama on 60 Minutes this Sunday.

The interview took place in the Cabinet Room of the White House and on the road in Osawatomie, Kansas, as the president begins his quest for re-election. The 60 Minutes piece, "President Obama," was produced by Frank Devine and Michael Radutzky.

On Overtime, we are bringing you the full interview from the White House. We are also making available a transcript of that interview.

Also on Overtime, a "Rewind" of Steve's first interview with then-Senator Obama as he was announcing his candidacy: "Obama 2007: Launching His Candidacy."

Finally, on the 60 Minutes Facebook page, photographs from that first interview - including the president sharing his tuna fish recipe with his daughters, Steve, and the 60 Minutes crew. They're in our Facebook photo album called "From the Field."

Facebook's response to 60 Minutes' report, "The Facebook Whistleblower"
Thanks for reading CBS NEWS.
Create your free account or log in
for more features.
View CBS News In
CBS News App Open
Chrome Safari Continue
Be the first to know
Get browser notifications for breaking news, live events, and exclusive reporting.