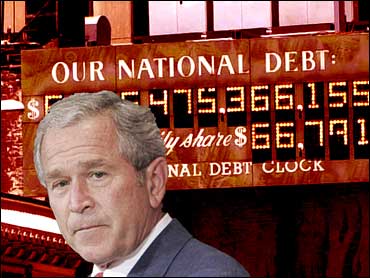 
To hear President Bush tell it, he's on the side of the angels when it comes to federal spending.

In his Saturday radio address, he blasted congressional Democrats for pursuing "tax and spend policies," while trumpeting his own commitment to keep taxes low and restrain federal spending.

He said his plan will produce a balanced federal budget by 2012.

But what Mr. Bush didn't mention, and what he almost never mentions, is the National Debt.

On the day he took office, the National Debt stood at this unfathomable number:

In fiscal shorthand, that's $5.7 trillion dollars. Trillion with a "T."

Six and a half years later, the Bureau of Public Debt tells us the National Debt clocks in at a staggering:

Sot it's not really hard to understand why Mr. Bush almost never mentions it.

The National Debt has gone up more on his watch than under any other president.

That means it took the Federal Government 225 years to accrue $5.5 trillion in debt under 42 U.S. presidents. But under President Bush alone, it has soared another 35.2%.

And the National Debt is not just a big number, it's an expensive one.

This year alone, it costs taxpayers $247.3 billion in interest payments.

It hardly gives the president bragging rights about fiscal discipline.

Yet, in his Saturday radio address, he skewered Democrats for their fiscal plans.

"They've passed a budget that would mean higher taxes for American families and job creators, ignore the need for entitlement reform, and pile on hundreds of billions of dollars in new government spending over the next five years," he said.

He threatened anew to veto any spending bills he considers excessive, and he says he's got the votes to keep his vetoes from being overridden.

"In the House, 147 Republicans have pledged to support fiscal discipline by opposing excessive spending," President Bush said. "These 147 members are more than one-third needed to sustain my veto of any bills that spend too much."

It should be noted that as a percentage of the nation's Gross Domestic Product, the National Debt is 67.9%. That's up from 57.4% the year Pres. Bush took office. It
was in the 67% range some of Bill Clinton's presidency as well – and he actually produced a federal budget surplus in each of the last three years of his term in office.

For that reason, officials at the Office of Management and Budget say the National Debt is no more of a problem now than a decade ago.

The size of the numbers just makes it seem otherwise.
Mark Knoller