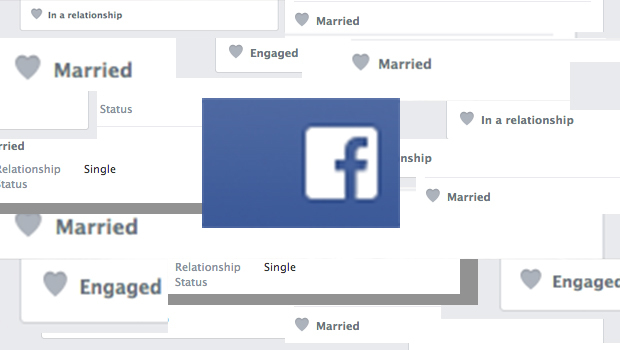 It might be possible to tell from looking at Facebook whether a relationship is going to last.

And, researchers say, clues on Facebook may reveal whom you're dating even if you don't broadcast your relationship status.

In a recent study, Lars Backstrom, a senior engineer at Facebook, and Jon Kleinberg, a computer scientist at Cornell University, started off with the question: "given all the connections among a person's friends, can you recognize his or her romantic partners from the network structure alone?"

To determine the connection and potential romantic links, the researchers created a new measurement that they call "dispersion." They define dispersion as "the extent to which two people's mutual friends are not themselves well-connected."

Let's say you met your significant other in college. All of your mutual friends would likely also be friends with each other, because you were all well connected then. You would have a lower dispersion score.

If, instead, you met on the train, have few (if any) mutual friends, and those mutual friends don't know each other -- essentially, you are the bridge between your significant other and your friends or co-workers -- you'll have a higher dispersion rating.

Previous studies have focused on embeddedness, a more simple measurement that looks at number of mutual friends two people share.

"We find that our dispersion measure has roughly twice the accuracy of embeddedness in identifying this partner from among the user's full set of friends," they wrote in the research paper. Using dispersion along with measurements of interaction further increased their accuracy in predicting a user's significant other.

In the first year of a relationship, combining dispersion and profile viewing time leads to more accurate partner predictions.

But once a couple rings in their one-year anniversary, it's more important to measure how much time they spend looking at each other's photos and how much their dispersion measure has changed. In other words, couples spend less time stalking each other online, and more time befriending each other's friends.

Their sample drew on the profiles of 1.3 million Facebook users who are at least 20 years old, have between 50 and 2,000 friends, and list a spouse or partner in their profile.

All together, Backtrom and Kleinberg analyzed more than 8.6 billion links, tracking the users every two months over the course of two years.

The algorithm correctly identified the user's significant other 60 percent of the time.

When the algorithm returned the wrong name as the "significant other" it was usually thrown off by a family member. This makes sense, as many siblings of similar age will be friends with each other's friends, co-workers and other connections, though they may not personally know all of those people's friends.

And in those cases when it couldn't figure out the correct partner, an interesting pattern emerged: a couple who can't be identified through dispersion score is significantly more likely to break up -- at least, on Facebook -- within 60 days.

In other words, if this new algorithm can't figure out who your partner is, he or she isn't likely to be your partner for much longer.