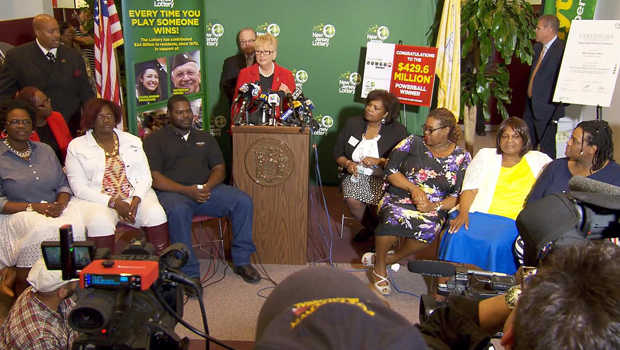 Eight members of the Smith family announced that they had the sole winning ticket purchased in Trenton for last Saturday's drawing. They plan to tithe 10 percent of the money to their church.

Valerie Arthur, one of the daughters, said family matriarch Pearlie Smith, 70, spent $6 for two tickets for drawings held last Wednesday and Saturday. They have hired attorneys to help them with the money and will take a trip to the usual family spot, though they wouldn't say where that was.

The trip to claiming the jackpot began last week at a 7-Eleven in Trenton when Smith bought two $2 tickets, one each for drawings held last Wednesday and Saturday, and spent an extra $1 on each ticket to get the "Power Play" option that multiplies the winnings.

Arthur said the winning numbers - 5-25-26-44-66 and the Powerball number 9 - weren't birthdays or anniversary dates and came to someone in a dream.

"We had divine intervention," she said.

Arthur told reporters on Friday that she retired as a prison administrator in August after working at the state Department of Corrections for 27 years. She declined to provide the occupations of her siblings.

Arthur also wouldn't say where she and her family lived other than "different cities."

Most of the convenience store's customers are locals who come in a few times a week to buy coffee or a soda and maybe a sandwich or snack. That led area residents to speculate that the person who holds the winning ticket may be living among them.

The ticket is the largest single jackpot winning ticket sold in New Jersey and the sixth-largest in Powerball history.

Powerball is played in 44 states plus Washington, D.C., Puerto Rico and the U.S. Virgin Islands.