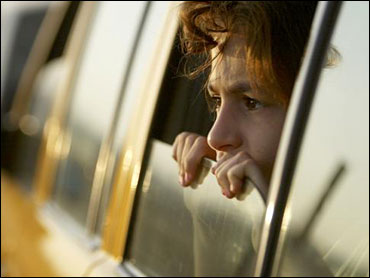 This time of year, you don't think twice about packing the kids into the car for a family outing, but most Americans are unaware of a danger lurking in their car that could threaten their children's lives.

Safety advocates say it's a dangerous defect found on many cars and trucks that's already caused the deaths of at least 70 children, and it can kill in just seconds.

"Somehow, some way, that child could always put a smile on my face," Sheila Johnson says. "It shouldn't have happened; it should not have happened." Mitchell was strangled by a power window in the family car.

"One minute we have him, the next minute we don't," Sheila Johnson adds.

Mitchell was waiting in the car while his mother was watching his younger brother in a school play. He was spitting sunflower seeds out the window-when he accidentally caused the power window to roll up on his neck -trapping him and suffocating him.

Sheila Johnson says, "You don't expect to come out and see your child's head sticking out the window, and the next thing you know, you're burying him."

Mitchell Johnson's death is not an isolated case.

At least seven American children have died in the last 3 months, strangled in accidents involving power windows. But the danger is no secret to carmakers or the federal government. Consumer advocates have been pushing for safer power windows for almost a decade.

David Champion, Consumer Reports director of auto testing, says, "The child puts their head out, one, two, it's all over."

He says the danger lies in power-window switches found on many American cars that can be easily activated by accident.

Champion explains, "If the child is inside the car and then sees something going on outside, they come look out the window, put their foot or knee on the switch, the window comes up, traps the head, and suffocates them; they can't scream; they can't do anything."

The solution? Champion says it already exists in every foreign car sold in America: safer, lever-type switches required by law overseas that are virtually impossible to activate accidentally.

Champion explains, "To raise the window, you have to put your finger underneath the switch and actually lift it up, so it has to be a positive intent to do that. If you actually lean on the switch, the window goes down."

Some foreign carmakers go one step further, using a safety feature you'll find on automatic garage doors. It's auto-reverse, a pinch protector. The window can go up, but if it hits anything, down it goes.

Experts say safer power windows would not cost more, but here in America, there's no law requiring them.

What has to happen to convince to all these entities, the government and all carmakers to go ahead and put in safe switches?

And that would mean more devastated families like the Johnsons.

Sheila Johnson says, "This should not have happened and that's all there is to it. My child is not coming home; my child is not going to make me laugh again."

The National Highway Traffic Safety Administration says it's working on new power-window safety regulations, but has no date when they'll be introduced.

American carmakers have already put the safer, lever-type switches in some models sold here, and Ford says it's in the process of equipping all models with those switches. The automakers say children should never be left in any vehicle alone.