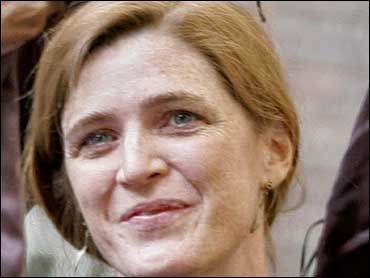 Hours after making her comment to a Scottish newspaper, Power abandoned her advisory role in the campaign.

The Associated Press reports that Power will serve as senior director for multilateral affairs at the National Security Council. This may make for some awkwardness: In her new capacity, Power will be in close contact and may have to travel with Clinton, the new Secretary of State.

Since the media firestorm that greeted her comments, Power has been inching back into a more public role in the Obama fold. She reached out to Clinton and was on transition teams for the State Department and the U.S. mission to the United Nations.

Officials close to the transition told the Associated Press that Power's gestures of apology have been well-received by Clinton. The two have met privately since the election. Both Clinton and Power appeared at the recent announcement of Obama's special envoys to South Asia and the Middle East, where they exchanged brief remarks.

Officials with knowledge of the decision spoke on a condition of anonymity, but said a formal announcement is forthcoming.

Power offered blunt criticism of Clinton in her interview with the Scotsman newspaper. "She is a monster, too," Power said in the interview. "She is stooping to anything."

Power went on to say, "the amount of deceit she has put forward is really unattractive."

In announcing her resignation, Power said that her comments did not reflect her views and that she, in fact, admired Clinton.

Clinton's campaign pounced on her comments as a fundraising tool almost immediately. In an email to supporters informing them of Power's remarks, the campaign solicited donations to "show the Obama campaign that there is a price to this kind of attack politics."

Power is an expert on human rights and foreign policy. She is best known for her 2008 book Chasing the Flame: Sergio Vieira de Mello and the Fight to Save the World, about the slain U.N. diplomat, and "A Problem from Hell": America and the Age of Genocide, for which she received the 2003 Pulitzer Prize in General Non-Fiction. She is currently a professor at Harvard's Kennedy School of Government.