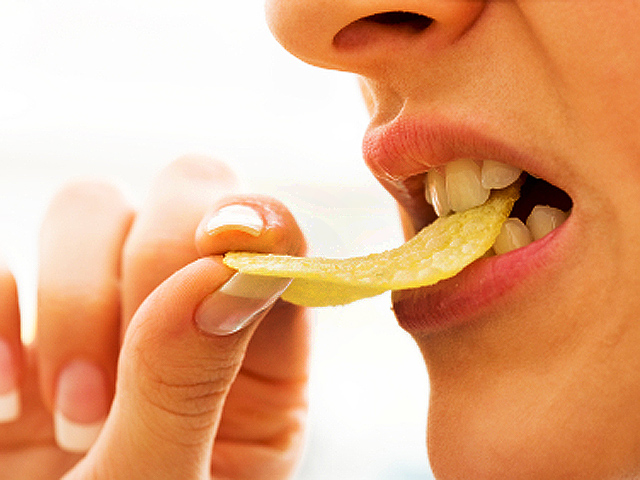 LOS ANGELES - Blame the potato chip. It's the biggest demon behind that pound-a-year weight creep that plagues many of us, a major diet study found. Bigger than soda, candy and ice cream.

And the reason is partly that old advertising cliche: You can't eat just one.

"They're very tasty and they have a very good texture. People generally don't take one or two chips. They have a whole bag," said obesity expert Dr. F. Xavier Pi-Sunyer of the St. Luke's-Roosevelt Hospital Center in New York.

What we eat and how much of it we consume has far more impact than exercise and most other habits do on long-term weight gain, according to the study by Harvard University scientists. It's the most comprehensive look yet at the effect of individual foods and lifestyle choices like sleep time and quitting smoking.

14 myths about healthy eating
Do snacks right: These have 80 calories or fewer

The results are in Thursday's New England Journal of Medicine.

Weight problems are epidemic. Two-thirds of American adults are overweight or obese. Childhood obesity has tripled in the past three decades. Pounds often are packed on gradually over decades, and many people struggle to limit weight gain without realizing what's causing it.

PICTURES: 12 foods that pack on pounds

"There is no magic bullet for weight control," said one study leader, Dr. Frank Hu. "Diet and exercise are important for preventing weight gain, but diet clearly plays a bigger role."

Doctors analyzed changes in diet and lifestyle habits of 120,877 people from three long-running medical studies. All were health professionals and not obese at the start. Their weight was measured every four years for up to two decades, and they detailed their diet on questionnaires.

For each four-year period, food choices contributed nearly 4 pounds (2 kilograms). Exercise, for those who did it, cut less than 2 pounds (1 kilograms).

Potato chips were the biggest dietary offender. Each daily serving containing 1 ounce (about 15 chips and 160 calories) led to a 1.69-pound uptick over four years. That's compared to sweets and desserts, which added 0.41 pound.

For starchy potatoes other than chips, the gain was 1.28 pounds. Within the spud group, french fries were worse for the waist than boiled, baked or mashed potatoes. That's because a serving of large fries contains between 500 to 600 calories compared with a serving of a large baked potato at 280 calories.

Soda added a pound over four years. Eating more fruits and vegetables and other unprocessed foods led to less weight gain, probably because they are fiber-rich and make people feel fuller.

For each four-year period, these factors had these effects on weight:

People who slept more or less than six to eight hours a night gained more weight.

The study was funded by the National Institutes of Health and a foundation. Several researchers reported receiving fees from drug and nutrition companies.

"Humans naturally like fat and sweet," said Dr. David Heber, director of the UCLA Center for Human Nutrition, who had no role in the study. "That's why we always tell people to eat their fruits and vegetables."

"It's hard to lose weight once you gain it," he said. "Anything that will give people a clue about what might prevent weight gain if they follow through with it is helpful."