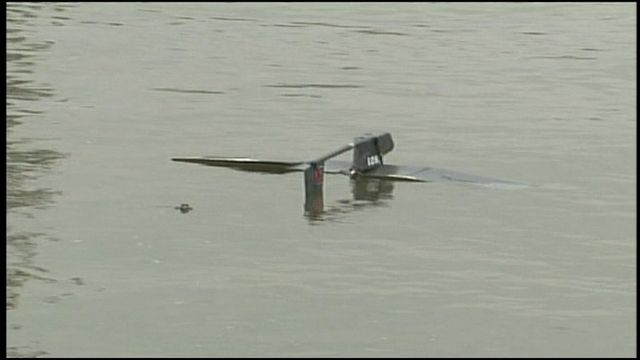 It was the drone fail seen round the world, and weeks after the Portuguese military's attempted launch of an aerial drone ended with a comedic splunk, the video of the mishap is still making waves, and getting laughs online.

In the video, taken during a press conference to showcase the new coastal surveillance tool, a masked man dressed all in black stands by a military dock with what looks and sounds like a toy plane hoisted above his head. He sprints towards the water, and launches the whirring drone off the dock as if he was throwing an oversized paper airplane. The drone immediately plummets, and the whirring ends with the sound of an anticlimactic splash.

The mishap was witnessed by Portugal's Defense Minister José Pedro Aguiar-Branco, while he was visiting a naval base near Lisbon. According to reports, the Portuguese navy said the drone's failure was due to part of the craft clipping the soldier who was launching it. A second attempt was successful, but the damage was already done. According to The Portugal News Online, the disastrous initial launch drew "quiet chuckles" from journalists in attendance, and inspired disparaging international headlines. The video, uploaded on April 16, has been viewed over 1 million times on Youtube.

In case you missed it, you can check out the clip above.