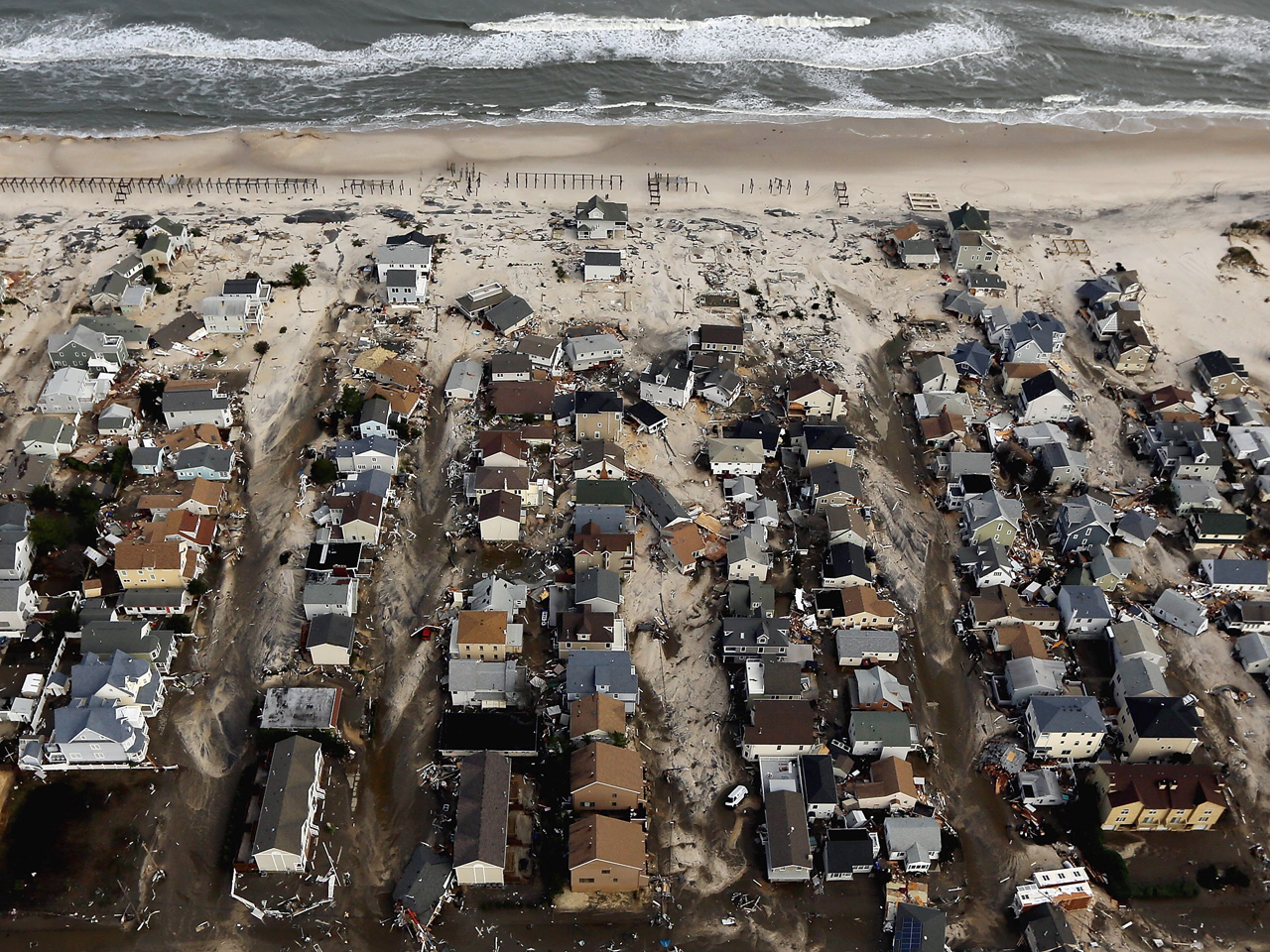 NEW YORKTwo major airports reopened and the New York Stock Exchange got back to business Wednesday, while across the river in New Jersey, National Guardsmen rushed to feed and rescue flood victims two days after superstorm Sandy struck.

For the first time since the storm slammed the Northeast, killing at least 72 people nationwide and inflicting billions of dollars in damage, brilliant sunshine washed over the nation's largest city — a striking sight after days of gray skies, rain and wind. The light gave officials and residents a true glimpse of destruction on a scale that the region has never seen before.

At the stock exchange, running on generator power, Mayor Michael Bloomberg gave a thumbs-up and rang the opening bell to whoops from traders on the floor. Trading resumed after the first two-day weather shutdown since the Blizzard of 1888.

New York's subway system was still down, but Gov. Andrew Cuomo said parts of it will begin running again on Thursday. And he said some commuter rail service between the city and its suburbs would resume on Wednesday afternoon.

On Wednesday, Manhattan's roadways were choked with desperate drivers, prompting Bloomberg to announce that only cars with at least three people in them would be allowed to cross the recently reopened bridges and tunnels on Thursday.

It was clear that restoring the region to its ordinarily frenetic pace could take days — and that rebuilding the hardest-hit communities and the transportation networks that link them could take considerably longer.

About 6 million homes and businesses were still without power, mostly in New York and New Jersey. Electricity was out as far west as Wisconsin and as far south as the Carolinas.

The scale of the challenge could be seen across the Hudson River in New Jersey, where National Guard trucks rolled into heavily flooded Hoboken to deliver ready-to-eat meals and other supplies and to evacuate people from their condo high-rises, brownstones and other homes.

The mayor of the city of 50,000 issued an appeal for people to bring boats to City Hall to help with the evacuation.

Natural gas fires raged Wednesday in a section of Brick Township, N.J., where dozens of houses were devastated by the storm's surge. No injuries were reported.

President Obama and Christie flew over the Jersey Shore Wednesday to assess the devastation that superstorm Sandy left in its wake, stopping at a community center to reassure the storm's victims that state and federal officials are working together to help the state recover.

"We are here for you," Mr. Obama told residents during a news conference following their tour. "We will follow up to make sure you get the help you need until you rebuild."

Christie, a supporter of Republican presidential nominee Mitt Romney, says he "can't thank the president enough" for his concern and compassion during the storm.

Outages in the state's two largest cities, Newark and Jersey City, left traffic signals dark, resulting in fender-benders at intersections where police were not directing traffic. At one Jersey City supermarket, there were long lines to get bread and use an electrical outlet to charge cellphones.

Amid the despair, talk of recovery was already beginning.

"It's heartbreaking after being here 37 years," Barry Prezioso of Point Pleasant, N.J., said as he returned to his house in the beachfront community. "You see your home demolished like this, it's tough. But nobody got hurt and the upstairs is still livable, so we can still live upstairs and clean this out. I'm sure there's people that had worse. I feel kind of lucky."

As New York began its second day after the megastorm, morning rush-hour traffic was heavy as people started returning to work. There was even a sign of normalcy: commuters waiting at bus stops. School was out for a third day.

The Brooklyn-Battery Tunnel, connecting Brooklyn to Manhattan, and the Holland Tunnel, between New York and New Jersey, remained closed. But bridges into the city were open, and city buses were running, free of charge.

On the Brooklyn Bridge, closed earlier because of high winds, joggers and bikers made their way across before sunrise. One cyclist carried a flashlight. Car traffic on the bridge was busy.

The subway system suffered the worst damage in its 108-year history, with floodwaters swamping tunnels and stations and threatening the electrical wiring. Experts said the cost of the repairs could be staggering.

Amtrak trains were still not running in or out of New York's Penn Station because of tunnel flooding.

Power company Consolidated Edison said it could also be the weekend before power is restored to Manhattan and Brooklyn, perhaps longer for other New York boroughs and the suburbs. Hundreds of thousands of New Yorkers lost power.

The recovery and rebuilding will take far longer.

When New Jersey's governor stopped in Belmar, N.J., during a tour of the devastation, one woman wept, and 42-year-old Walter Patrickis told him, "Governor, I lost everything."

Christie, who called the shore damage "unthinkable," said a full recovery would take months, at least, and it would probably be a week or more before power is restored to everyone who lost it.

"Now we've got a big task ahead of us that we have to do together. This is the kind of thing New Jerseyans are built for," he said.

Forecasting firm IHS Global Insight predicted it would cause $20 billion in damage and $10 billion to $30 billion in lost business. Another firm, AIR Worldwide, estimated losses up to $15 billion.

In Connecticut, some residents of Fairfield returned home in kayaks and canoes to inspect the flood damage.

"The uncertainty is the worst," said Jessica Levitt, who was told it could be a week before she can enter her house. "Even if we had damage, you just want to be able to do something. We can't even get started."

In New York, residents of the flooded beachfront neighborhood of Breezy Point in returned home to find fire had taken everything the water had not. A huge blaze destroyed perhaps 100 homes in the close-knit community where many had stayed behind despite being told to evacuate.

John Frawley acknowledged the mistake. Frawley, who lived about five houses from the fire's edge, said he spent the night terrified "not knowing if the fire was going to jump the boulevard and come up to my house."

"I stayed up all night," he said. "The screams. The fire. It was horrifying."