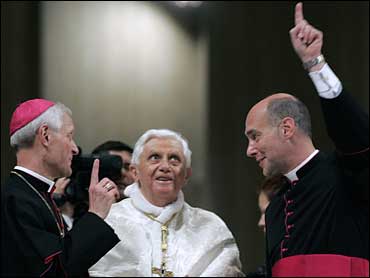 Feted at the White House on his 81st birthday, Pope Benedict XVI praised Americans for their deep religious beliefs Wednesday but later told the nation's bishops that the scourge of clergy sex abuse had sometimes been "very badly handled."

Benedict's comments, his toughest critique yet of the U.S. church's worst problem, marked the second day in a row that he addressed the abuse scandal. They came as he addressed the nation's bishops at the imposing Immaculate Conception shrine.

He also reminded the prelates that religion cannot only be considered a "private matter" without any bearing on public behavior.

The pontiff questioned how Catholics could ignore church teaching on sex, exploit or ignore the poor, or adopt positions contradiciting "the right to life of every human being from conception to natural death."

"Any tendency to treat religion as a private matter must be resisted," he said. Benedict's remarks came on a day when all of the five Catholic justices on the U.S. Supreme Court approved the most widely used method of lethal injection, and congressional representatives who support abortion rights said they planned to take Holy Communion on Thursday at a papal Mass.

The scandal has cost the church $2 billion in settlements - a moral crisis that became a fiscal crisis, reports CBS News correspondent Jeff Glor.

Benedict called the clergy sex abuse scandal a cause of "deep shame." He decried the "enormous pain" that communities have suffered from such "gravely immoral behavior" by priest.

Benedict addressed clerical molesters in the wider context of secularism and the over-sexualization of America. "What does it mean to speak of child protection when pornography and violence can be viewed in so many homes through media widely available today?" he asked.

The pope spoke after Cardinal Francis George of Chicago, who is the president of the U.S. Conference of Catholic Bishops.

George said that the consequences of the clergy abuse scandal "and of its being sometimes very badly handled by bishops makes both the personal faith of some Catholics and the public life of the church herself more problematic."

Benedict agreed with that assessment.

"Responding to this situation has not been easy and, as the president of your episcopal conference has indicated, it was sometimes very badly handled," he said.

The German-born pope began his first full day in America with a visit to the White House, where a South Lawn crowd of more than 13,500 sang "Happy Birthday" and President Bush said that the first papal White House visit in 29 years was a reminder for Americans to "distinguish between simple right and wrong."

"We need your message to reject this dictatorship of relativism and embrace a culture of justice and truth," Bush said. "In a world where some see freedom as simply the right to do as they wish, we need your message that true liberty requires us to live our freedom not just for ourselves, but in a spirit of mutual support."

The pontiff said that he was visiting "as a friend, a preacher of the Gospel and one with great respect for this vast pluralistic society."

His 90-minute visit to the White House — only the second ever by a pope — was accompanied by the kind of pomp and pageantry rarely seen even on grounds accustomed to welcoming royalty and the world's most important leaders.

After their meeting in the Oval Office, Bush and the pope were joined by Laura Bush, and the three "prayed for the (institution) of the family," said Vatican spokesman the Rev. Federico Lombardi.

On a glorious spring day, lampposts fluttered with flags in the red-white-and-blue of America and yellow-and-white of the Holy See. The vast South Lawn was filled nearly to bursting with the largest crowd of Bush's presidency, requiring a large television screen so those further back could see.

Groups of Boy and Girl Scouts in their uniforms and members of the Knights of Columbus wore their traditional brightly colored feather headgear. Thousands unable to get inside filled Washington's streets as well, playing music and waving banners as they waited for a hoped-for glimpse of the pontiff passing by later in his popemobile.

Benedict was greeted by Bush and his wife. The two men strolled along a red carpet to a platform on the lawn, and sat side-by-side as the Marine Band played the national anthem of the Holy See while a 21-gun salute sprayed gray smoke into the air.

Benedict seemed genuinely moved as "Happy Birthday" was sung. Later, at a private lunch with American cardinals at the Vatican Embassy, the pope was shown in a photo released by the Vatican standing before a four-tier white cake with a single candle atop it.

The South Lawn arrival ceremony was followed by 45 minutes of private talks between Bush and Benedict alone in the Oval Office.

It was the 25th meeting between the leader of the world's Roman Catholic and a U.S. president, sessions that have spanned 89 years, five pontiffs and 11 American leaders.

Bush and Benedict agreed Wednesday that terrorism is an unacceptable weapon for any cause or religion. They also share common ground in opposing terrorism, abortion, gay marriage and embryonic stem cell research.

But they disagree over the war in Iraq, the death penalty and the U.S. trade embargo against Cuba. Benedict also speaks for environmental protection and social welfare in ways that run counter to Bush policies.

A joint U.S.-Holy See statement hinted that Benedict brought up his concerns about the damage caused by punitive immigration laws. It said the leaders discussed "the need for a coordinated policy regarding immigration, especially their humane treatment and the well being of their families."

On Iraq, discussion steered away from the war itself to focus primarily on worries for the Christian minority in the Muslim-majority country, said White House press secretary Dana Perino.

"The two reaffirmed their total rejection of terrorism as well as the manipulation of religion to justify immoral and violent acts against innocents," the statement said.

It also said the leaders "touched on the need to confront terrorism with appropriate means that respect the human person and his or her rights," a reference Perino could not explain. Benedict has been critical of harsh interrogation methods, telling a meeting of the Vatican's office for social justice last September that, while a country has an obligation to keep its citizens safe, prisoners must never be demeaned or tortured.