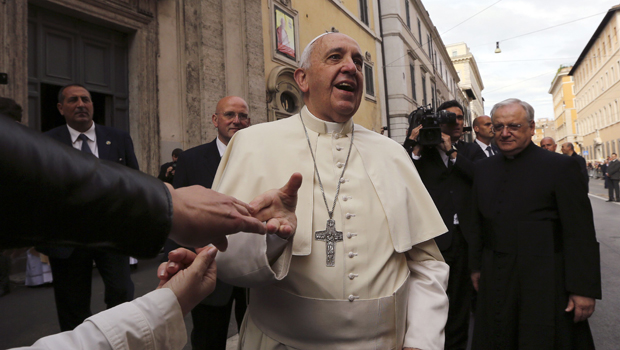 "The Internet, in particular, offers immense possibilities for encounter and solidarity. This is something truly good, a gift from God," Pope Francis said in a recent statement. But it seems his affinity for staying connected with the wider world does not extend to Facebook.

Quartz reports that Facebook officials recently visited the Vatican to encourage the Pope to join the world's largest social network. He declined, according to the archbishop in charge of social media for the Vatican, Claudio Maria Celli, because there are too many opportunities for critics to post profane comments.

The pontiff is already on Twitter, as @Pontifex, where Vatican officials tweet at least once daily in nine languages. He has more than 4 million followers and is subject to at least the normal share of profanity, but on Twitter such messages can be more easily ignored.

Speaking at a lunch in New York, Celli explained that "some cardinals have been concerned about the profane replies that @Pontifex often receives on Twitter... He said the issue caused a 'crisis' at the Vatican when the accounts were created," reports Quartz's Zachary M. Seward.

He added that Vatican officials already devote a significant amount of time to removing comments from the church's Facebook page for its news site, News.va, and they do not see a reason to start devoting similar amounts of time and energy to a Facebook page in the pope's name.

They did look into ways to limit posts on a Facebook page or post, Vatican Insider reported in February. "The Vatican has assigned a team of IT technicians to look into ways in which to prevent offensive or inappropriate messages and other such material from being posted on the Pope's page. This is the biggest obstacle that would need to be overcome," it said.

But after determining that doing so wasn't feasible, they apparently it was best to just stick with Twitter.