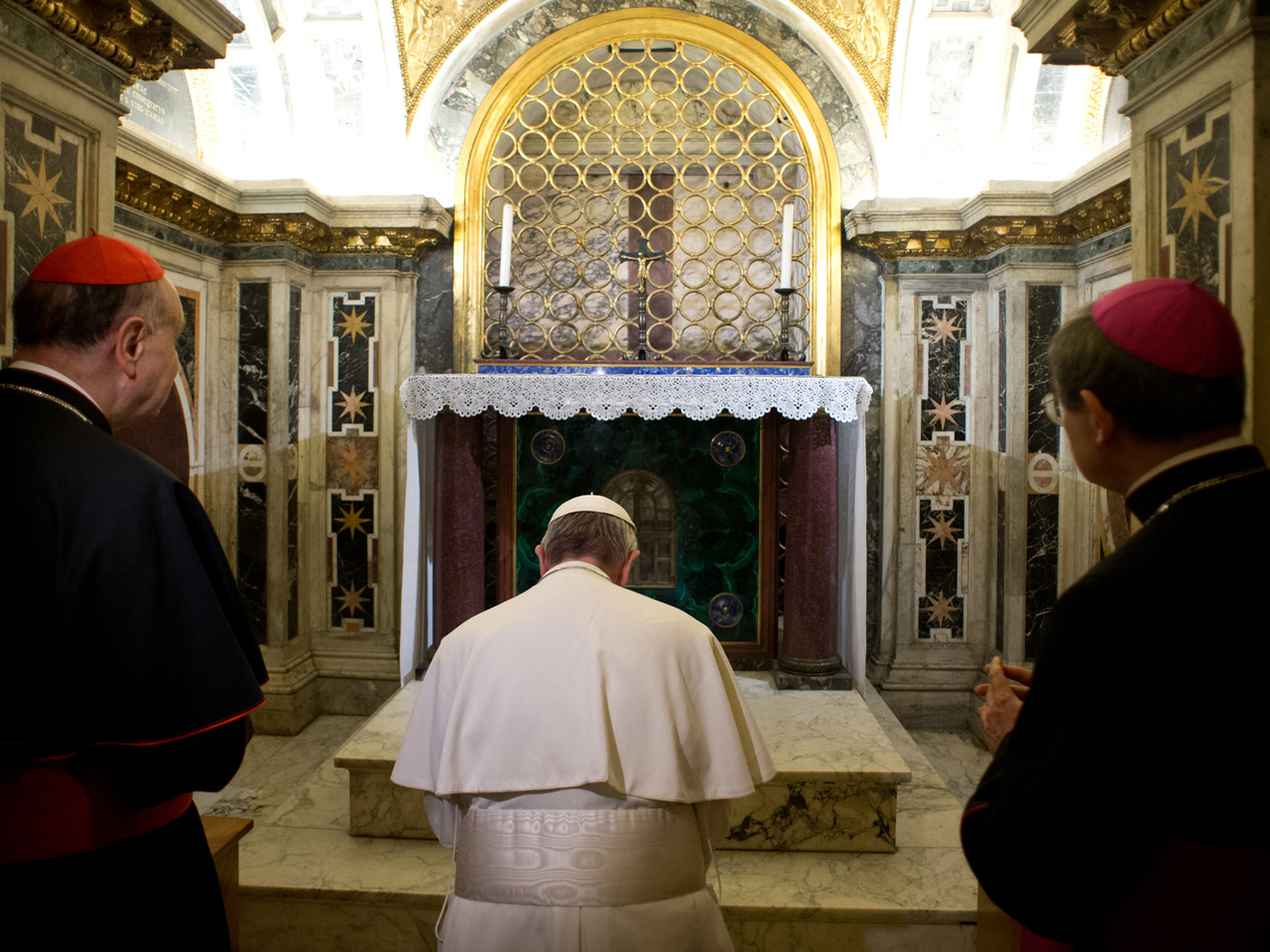 By doing so, Francis became the first pontiff to visit the necropolis, where pagans and early Christians were buried, since extensive archaeological excavations were conducted at the ancient site decades ago, the Vatican said.

The 45-minute "visit of devotion to the tomb of St. Peter" was private, the Vatican said, but it later released a video of it.

The basilica was built over the location where early Christians would gather in secret, at a time of persecution in ancient Rome, to pray at an unmarked tomb believed to be that of Peter, the apostle Jesus chose to lead his church.

The Vatican first said Francis would pray at Peter's tomb, but later said he prayed instead in the basilica.

The new pope `'paused in silent prayer, in profound and emotional meditation" in the Clementine Chapel in the vast basilica that is `'the closest place (in the basilica) to the tomb of the Prince of the Apostles," it said.

During a tour of the necropolis conducted by its director and an Italian cardinal, the pope "climbed up a bit, got closer to the place where the tomb of St. Peter lies, exactly under the central altar and the dome of the basilica," the Vatican said.

Francis walked down the entire main street of the ancient city of the dead, the statement said. The streets of the necropolis are similar to those of ancient Rome, only they are flanked by tombs instead of shops and apartments.

The Vatican said Francis walked to the necropolis entrance from the hotel on the Vatican grounds where he lives, took the tour and later — after paying homage at the tombs of several popes in another underground level known as the grottoes, including Pius XII, Paul XVI and John Paul I — strolled back to his residence.

The underground excursion was a sharp departure from how popes in past years often spent the day after Easter, known in Italy as `'little Easter." Those pontiffs would head to Castel Gandolfo, the Vatican palace in the Alban Hills, a short drive from Rome.

But that oasis of sprawling gardens and strolling paths in the quaint hill town is occupied by the predecessor of Francis, Benedict XVI, who spent the last hours of his papacy there before becoming the first pope in 600 years to retire. Benedict is staying in Castel Gandolfo until a monastery at the Vatican in Rome can be readied for him.

Many Italians spend `'little Easter" by having a picnic lunch in the countryside or in city parks, and Francis told Romans and tourists who gathered in St. Peter's Square at noon Monday to see him to `'have a good lunch." Francis said he was praying that Easter would inspire the faithful so that `'hatred gives way to love, lies to truth," and that it would especially comfort those in `'most need of trust and hope."

He spoke to them from the studio window of the apartment in the Apostolic Palace overlooking the square. Benedict and popes before him lived there, but so far Francis, who stresses simplicity, has declined to move into the quarters.

Instead, he has continued to stay at the Vatican hotel, where, as Buenos Aires archbishop, he stayed with fellow cardinals to elect Benedict's successor. They chose him, Jorge Bergoglio, the first pontiff from South America.

St. Peter's mission was to continue to preach the message of Jesus and reach more souls. Francis, as a Jesuit, is steeped in the evangelizing mission of the church, and the necropolis tour brings him back to the origins of the church in its simplest years as a community of Christians professing their faith in defiance of the crackdown by Roman emperors.

Peter himself was among the Christian martyrs during Nero's reign. He is believed to have been crucified, head down, on the Vatican hill.

Constantine, the first Christian emperor, had an early basilica built on the slopes of the Vatican Hill, burying the pagan and Christian cemetery — necropolis means `city of the dead' — that surrounded Peter's burial site.

The current basilica, named after St. Peter, was constructed over the earlier basilica that was deemed unsafe and demolished in the late 15th century.

The Baroque master architect Bernini designed the bronze canopy over the central altar over the spot of Peter's burial site. The current basilica was planned as an awe-inspiring monument that would project the image of a powerful church.

Under popes of the last century, extensive excavations were carried out of the sprawling necropolis. In 1965, archaeologists said they had found the bones of Peter in an area near an ancient Greek inscription saying `'Peter is here."

Part of a nearby necropolis came to light in 2003 during construction of a parking lot.

A few years ago, the Vatican unveiled the largest and most luxurious of the pagan tombs under St. Peter's Basilica, that of a family of former slaves.

Guided tours of the necropolis, upon appointment, have been one of the most sought-after attractions for tourists to the Vatican.